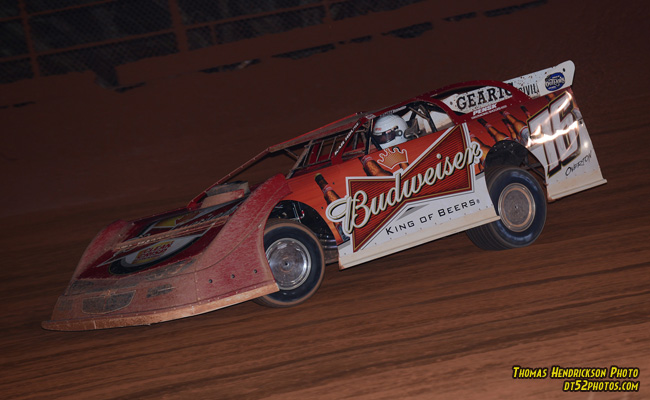 CONCORD, N.C. – March 12, 2015 – Brandon Overton didn’t get enough of the World of Outlaws Late Model Series when the national tour visited his home region in February so he’s making plans to join the series on the road.

The 23-year-old standout from Appleton, Ga., has officially entered this year’s WoO LMS Rookie of the Year chase and will be eligible for the $10,000 prize awarded to the tour’s top first-year regular at season’s end as well as the $250 Rookie of the Race bonus that’s awarded to the highest-finishing rookie in each WoO LMS A-Main throughout the season.

After a strong performance during February’s season-opening stretch of seven WoO LMS races in Georgia and Florida, Overton enters the tour’s next action March 20-21 at Kentucky Lake Motor Speedway in Calvert City, Ky., and I-30 Speedway in Little Rock, Ark., 12th in the overall series standings and leading Mason Zeigler of Chalk Hill, Pa., and Jordan Yaggy of Rochester, Minn., in a talent-filled Rookie of the Year chase.

“This is all I’ve done my whole life and it’s what I want to keep doing. Running a national series is the next step and I feel like I’m ready for it,” said Overton, who began his Late Model career a decade ago at the young age of 13. “We’ve looked at it and decided we’re gonna try to do it with the goal of winning Rookie of the Year. We’ll just see where the rest of the points play out, but I feel like we’ve got a pretty good shot at winning the rookie deal and maybe even winning a race or two.”

Overton has plenty of reason to be optimistic about his chances after his performances in February. Debuting a brand new MasterSbilt by Huey Race Car for longtime car owners Doug and Cathy Varnadore, Overton nearly pulled off a surprise victory in the WoO LMS tour’s season opener Feb. 6 at Screven Motor Speedway’s Winter Freeze, leading 43 of 50 laps before finishing second to Steve Casebolt of Richmond, Ind.

He kept the momentum rolling as the tour moved to Bubba Raceway Park for two races during the Bubba Army Winter Nationals Feb. 14-15, finishing sixth in the first leg before mechanical woes dropped him from a top-five spot the following night.

Overton struggled in the three WoO LMS events during Volusia Speedway Park’s DIRTcar Nationals Feb. 19-21, failing to qualify for the first A-Main and finishing 20th and 28th in the other two races. But as he looks forward to his first year of full-time national traveling, Overton is confident he can show more of the promise he displayed at Screven and Bubba Raceway Park.

“I know I can race with those guys and I feel like we’re gonna have some good runs,” said Overton, whose No. 76 machine sports a large Budweiser logo thanks to sponsorship from A.B. Beverage, an Anheuser-Busch distributor in Evans, Ga., owned by the Varnadores. “I know we’re gonna go and struggle at some places, but I think that we’ve got a good shot at winning the Rookie of the Year.”

Overton has also proven his capabilities with his past success. He won numerous special events in the Crate Late Model ranks before bursting onto the Super Late Model scene in 2014 with regional victories with the Carolina Clash and Southern Nationals tours and a pair of runner-up finishes on the Lucas Oil Late Model Dirt Series.

But to claim Rookie of the Year honors this season, Overton will have to overcome two drivers that have shown plenty of promise of their own. Zeigler, 22, turned heads in limited WoO LMS action last year, earning a top five, two top 10s and a fast-qualifier award in nine appearances on the series. Yaggy, 23, was also solid last season with a fast-qualifier award and two heat race wins in his six appearances on tour.

“Mason and Jordan, they’re both good drivers,” Overton said of his fellow rookie contenders. “We’re gonna go places where I might be a little better, but we’ll go places where they’ll probably be better than me. It’s cool that we’re all from different regions and now we get to run against each other and see how we stack up.”

As excited as he is to chase the rookie title, Overton is also tackling the tour with a bit of restraint. With just one car and one engine at his team’s disposal, Overton knows he’ll have to be smart and do his best to avoid setbacks that might derail his points chances or overburden his team owner.

“Mr. Varnadore has been great to me and the reason he’s stuck behind me as long as he has is because I race within my means and take care of my stuff,” Overton said. “I’ve got one motor and one car. Most anybody else that does this has two motors and two cars. Maybe we can pick up another sponsor or something and get another car, but right now we’re gonna do our best and try to take care of our stuff and just see how it goes.”

One thing Overton does have in his favor is technical support from chassis builders Billy Vacek and Tader Masters of MasterSbilt by Huey. He switched to their chassis brand over the offseason and has given much credit to Vacek and Masters for his early-season performances. He hopes their continued support will lead to a successful rookie season.

“Now that I’m racing with Tader and Billy, they’re there at the races and they’re helping me more than anyone ever really has,” Overton said. “That’s the whole thing about it. I felt like with their help I can go out and run with just about anybody. They want to see me win and be successful. Hopefully that’s what we’re going to do.”