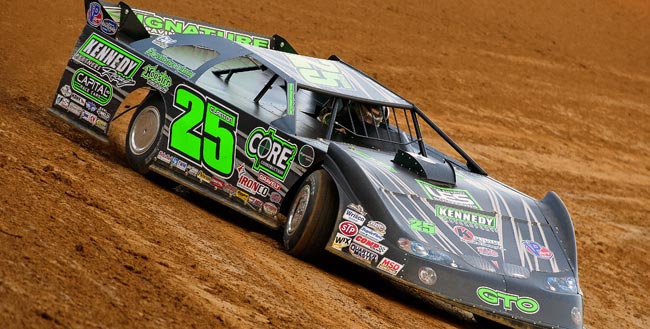 BRAINERD, MN – July 13, 2012 – Shane Clanton started the World of Outlaws Late Model Series ‘Wild West Tour’ with a win in Minnesota. He’d like to close it with another visit to Victory Lane in the Gopher State.

The 36-year-old star from Fayetteville, Ga., will get his chance on Saturday night (July 14) at North Central Speedway, which returns to the WoO LMS schedule for the first time in six years to cap the circuit’s five-race western swing through Minnesota, North Dakota, South Dakota and Manitoba.

“That would be a perfect week – start it with a win and end it with a win,” said Clanton, whose triumph in the ‘Wild West Tour’ opener on July 7 at Deer Creek Speedway in Spring Valley, Minn., was his first on the 2012 WoO LMS. “Anytime you win the last race on a trip, it makes the drive home easier. Just like last year’s ‘Wild West’ deal – the ride home from Gillette (Wyo.) wasn’t so long when we won. A win like that pumps you up and you get to enjoy it longer than usual.”

Clanton is a good bet to be in the mix for the $10,000 checkered flag in North Central’s Dondelinger Automotive Company 50 – not only because he has his Kennedy Motorsports Capital Race Car running up front recently, but also because he took so well to the three-eighths-mile North Central oval in his only previous appearance.

When the WoO LMS visited North Central on May 31, 2006, Clanton emerged as the evening’s top gun. He was fourth-fastest in time trials, finished second in a heat race and drove forward from the fourth starting spot to grab the lead of the 50-lap A-Main on lap 10. He appeared to be in control of the action when a flat left-rear tire caused him to pull up lame on lap 25, leaving him with a disappointing 12th-place finish in a race when by Rick Eckert of York, Pa.

“I had bad luck,” recalled Clanton. “They had a major pileup on the frontstraightaway (on lap 11) and I ran over something with the left-rear tire, and then about halfway through it went flat.

“That was a World of Outlaws race that just slipped away. To this day, if I could just keep air in the tires better, I’d have won a lot more races. But that’s racing.”

The North Central loss stings Clanton a bit more than others he’s experienced because it could be said that it cost him the 2006 WoO LMS championship. He finished a career-best second in the standings that season, 16 points behind Tim McCreadie of Watertown, N.Y., who placed 11th at NCS. Considering Clanton lost the title to McCreadie by eight finishing positions, a victory at NCS would have flipped the six-figure championship prize to the ‘Georgia Bulldog.’

Clanton doesn’t dwell on that scenario, however. He prefers to look back on the strength he showed at North Central to buoy himself for the circuit’s long-awaited return engagement on Saturday night.

“No track owes you one,” said Clanton, who has 16 career WoO LMS victories. “You make your own luck. That’s how I feel about it, and that’s what we’ll have to do when we go back there.

“Right now I feel good about our chances anywhere we go. We struggled there for a little bit, but we’re O.K. now. We’re getting in a good groove with our deal, and with Brainerd (North Central), we’re going to a place where we’ve run well in the past so I’m looking forward to it.

“Hopefully we can pick up with our car where we left off (six years ago),” continued Clanton, who was driving for the RSD Enterprises team in his last trip to North Central but now competes for Kennedy Motorsports. “We were real good that night. For some reason, we hit on the right setup as soon as we went out there and I just felt comfortable all night.

“I remember that we qualified pretty well and were good in our heat, and then (speedway officials) went out and reworked the racetrack before the feature and made pretty racy. I think we had the best car, but we just didn’t win the race.”

Clanton, who enters Saturday’s competition in a close battle for fourth place in the WoO LMS points standings with Chub Frank of Bear Lake, Pa., will be joined in the North Central field by 11 other World of Outlaws regulars. Including Clanton, six of this year’s tour travelers competed in the 2006 event at NCS.

Eckert, the defending WoO LMS champion, has the most fond memories of NCS thanks to his victory in ’06. He grabbed the lead three circuits after Clanton’s flat tire and controlled the remainder of the distance to record his fourth win en route to a career-high eight series triumphs that season.

North Central Speedway’s grandstand gates are set to open at 4:30 p.m. CT and the backstretch gates at 6 p.m. on Sat., July 14. The program is scheduled to begin with Hornet division racing at 5 p.m., followed by WoO LMS hot laps at 6:30 p.m. and qualifying immediately afterward. WISSOTA Super Stocks and Midwest Modifieds will also be in action.

More information on the WoO LMS at North Central Speedway is available by visiting www.racencs.net or calling 218-828-1545.