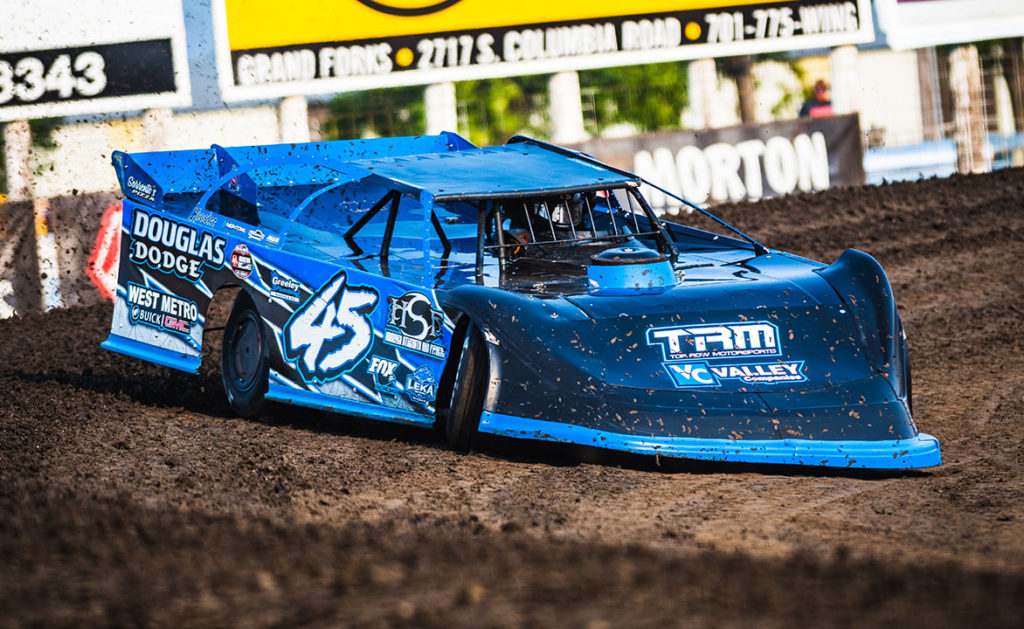 As the 2021 season begins to wind-down, some drivers are already looking ahead to next year. For Kyle Hammer, it’s embarking on a new journey in 2022—his rookie campaign with the World of Outlaws Morton Buildings Late Models.

The Clinton, IL driver switched from a DIRTcar UMP Modified to a Late Model earlier this season and plans to take his racing program to the national level. After a conversation with fellow Illinois driver Dennis Erb Jr., his team decided to join the Series.

“We talked to [Erb] to see what it would cost money-wise, and he pretty much just kind of put it in our eyes that no matter what you do, it’s going to cost the same amount of money,” Hammer said. “The only difference is with the World of Outlaws; you’re going to spend more money on fuel getting to the track. But, in the long run, you’re going to make more with the payouts, so he kind of talked us into it, and we’re going to go for it.”

Hammer already gained experience with the World of Outlaws Late Models in 2021, starting with the Northern tour in July. He’s made three starts in six appearances with the Series and said he’s enjoyed how efficient the schedule is on race night.

“We definitely liked an organized program more than we do a local show where some of our local shows around [Illinois] you’re not getting out of the track until two, three in the morning, and they’re only running four classes,” Hammer said. “We like being able to know what time you’re going to do exactly what; everything’s planned out, and you’re good to go.”

The switch has been a learning curve for Hammer, getting behind the wheel of a Late Model for the first time since 2015. He stated the difference between the two cars is more complicated than people might think.

“The driving style is the biggest thing; it’s not as similar as what everybody thinks it would be,” Hammer said. “The Modified, they drive themselves so much easier going into the corners and stuff like that where the Late Model you really have to hustle them and get them to work themselves. It’s just a lot more work than what people realize.”

Tires are another challenge Hammer faced when he switched to a Late Model because of the preparation teams need to do before hitting the track.

“It’s been a little bit difficult here and there, going from not doing any tire work with the modified where you can’t groove or anything like that, to the Late Model that’s double the tire and you have to groove and sipe them and everything else,” Hammer said.

Despite the steep learning curve for Hammer, he’s already gained valuable experience racing against some of the top Late Model drivers in the country. He was surprised at how quickly he started to move in the right direction.

“To be able to go out and actually be able to make the shows and run decently close to the front; we had a couple of top-10s and stuff was definitely an eye-opener, not something you really expect to do the first time in a Late Model for six years,” Hammer said.

In three starts with the World of Outlaws, Hammer has finishes of 11th, 13th, and 23rd.

As Hammer embarks on his new venture in 2022, he’s already taken a liking to a particular type of track.

“I’m looking forward to the bigger stuff; I like the bigger tracks,” Hammer said. “The 1/4-mile stuff is what I grew up on, but we’ve been to Eldora and Knoxville the last two weeks, and I enjoy that kind of stuff.

“The bigger momentum tracks, you don’t have to hustle the car around the cushion and stuff like that.”

That may help Hammer kickoff a strong rookie season in 2022 as the World of Outlaws Late Models will run seven nights at the half-mile Volusia Speedway Park in Barberville, FL, starting with the Sunshine Nationals (Jan. 20-22) and then concluding with four nights at the DIRTcar Nationals (Feb. 16-19).

Hammer is looking forward to his new journey next season but doesn’t have the goal some fans may expect. While he’d love to add Rookie of the Year to his accolades, he has another priority in 2022.

The World of Outlaws Morton Buildings Late Models return to action on Friday, Oct. 1, at Cherokee Speedway in Gaffney, SC, followed by a return to Senoia Raceway in Senoia, GA on Saturday, Oct. 2.

ROAD TO CHARLOTTE: Gustin Looks Back on Rookie Season with World of Outlaws