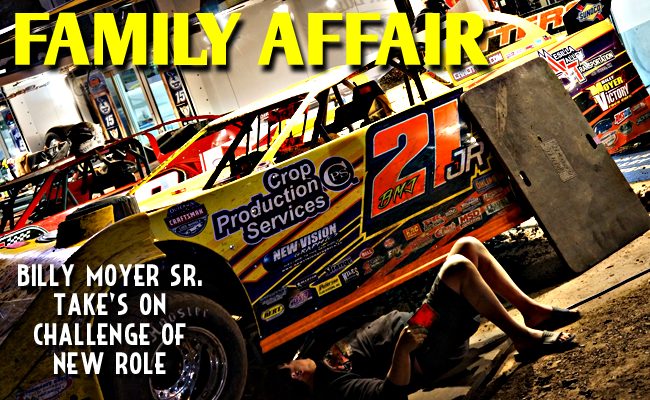 CONCORD, NC. – March 2, 2016 – Three-time World of Outlaws Craftsman® Late Model Series champion Billy Moyer Sr. has been a permanent staple in the pits since winning the inaugural season title in 1988. Following his semi-retirement last fall, Moyer has found a new role, and much like his racing career, has succeeded in it.

Although Moyer has not competed this year, the continuous off-track responsibilities have not derailed the three-time series champion from jumping back behind the wheel at some point. Even without being the one driving the car, Moyer still participates in race day activities to better his young program.

“If I don’t have my car at the track then I am there to help my customers,” Moyer said. “I want them all to run well. All of us as a team, whether it’s me, (Billy Moyer) Junior or Brandon, we want everyone to run good and that’s our goal.”

Moyer, who owns 44 career World of Outlaws victories, has taken control of his current role both on and off the track. Currently Moyer Victory Chassis has produced 25 cars for customers all over the United States and beyond.

“That’s a lot more than people think are out there, but it’s not as much as where we want to be or as much as some other chassis manufacturers have,” Moyer said. “Mainly our cars are in the Midwest and up north, with a couple of them now in Canada.

“For the most part, all the customers I have are happy and we’re working on getting more on the national level. Brandon [Overton] has a couple of them now so we’re expecting him to run good as well as Rambo has a couple in South Carolina.”

With the conclusion of the 45th Annual DIRTcar Nationals, Moyer’s new role has him tasting victory lane again, but in a different fashion.

“When Junior won, that was great. As I told people it was better than winning the race myself,” the elder Moyer said of his son’s victory at the DIRTcar Nationals. “Seeing him win, it was pretty cool because he was happy and that definitely makes me happy.

“That night everything fell into place just right. He did a heck of a job. He didn’t beat them by a little bit, he beat them by a lot. He just had everything going for him that night and he was on top of his game and did very well. I wish we could’ve ran other nights as good as he ran that night but circumstances change.”

The younger Moyer captured his first career DIRTcar Nationals victory on the opening night for the DIRTcar Late Models, a victory that he now shares with his dad who owns multiple victories at the famous event.

“Winning at the DIRTcar Nationals means a lot,” Moyer Sr. said. “Anytime you can win is great but down there it’s usually a pretty tough crowd you have to beat. When you win there you beat the best, because everybody goes to that race.”

“I’ve never ran good in a feature there,” Moyer Jr. said on the night of his win. “The car was perfect – my dad did a heck of a job. Just having my dad there means more than anything. Growing up he didn’t always get to be there, he had to go out and make a living, so the win means a lot.

“I’m really excited, we finally got a Gator. The car was phenomenal, I tend to overtighten myself a lot, so it was great having my dad here to help me on the adjustments.”

Moyer Jr. has started the season claiming a fast time, heat win and top 10 at Screven Motor Speedway, before winning the opening night at Volusia. With the younger Moyer just outside of the top 10 in the World of Outlaws points and chassis teammate Overton just outside of the top five, the elder Moyer has been very pleased with the progress of his program.

With the series taking a few weeks off before the Douglas Dodge Ram Trucks Illini 100 at Farmer City (Ill.) Raceway, Moyer has a very busy schedule to accomplish in hopes of making his first appearance of the 2016 season.

“I’m hoping to take my car to the Farmer City race,” Moyer said. “I got my knee replaced last week, so if everything goes well and we get through rehab then I will be there. I’m just going to work hard at what I am trying to do and see if my tendons and muscles stretch in the right direction, but only time will tell if I feel good enough by that time to go.

“I also have a help issue as far as my team goes. I had to let all of my people go except one guy who’s been with me forever. So I just have the one guy and if I want to be able to race at that level then I need to have more than just myself and one other guy.”

As one of the greatest late model drivers in the country enjoys his ‘semi-retirement’, Moyer’s knowledge of the sport is being passed on through his chassis program that has helped some of the series’ rising stars step up.