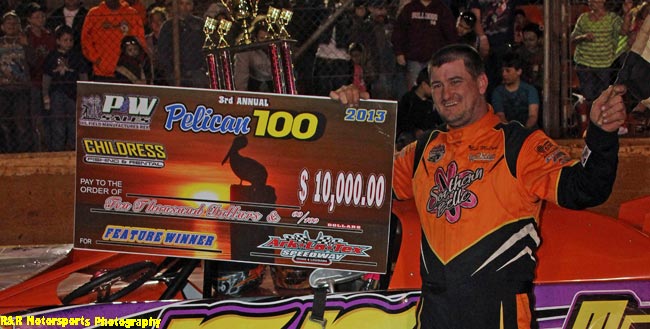 MERIDIAN, MS – March 17, 2013 – Finally, Bub McCool has the luxury of a World of Outlaws Late Model Series event in his backyard.

The renowned national tour will makes its inaugural visit to Whynot Motorsports Park on Sat., March 23, giving McCool, 35, of Vicksburg, Miss., his first chance to battle the World of Outlaws stars in his home state since becoming a circuit regular last year.

“It’s definitely nice to have an Outlaw show so close to the house,” said McCool, who will seek to keep the $10,000 first-place check for Saturday night’s 50-lap WoO LMS A-Main from leaving Mississippi. “We’re on the road all year with the Outlaws, so, for a weekend anyway, we don’t have to go so far. It makes things a little easier.”

Of course, with the three-eighths-mile Whynot oval located about 150 miles due east of McCool’s home, he’s far from being a true ‘local’ at the track. He’s never even been a weekly competitor at the speedway. But considering the 2013 WoO LMS schedule will take McCool to such places as Fonda, N.Y. (approximately 1,375 miles from his doorstep), Winnipeg, Manitoba (1,475 miles), Cornwall, Ont. (1,480 miles) and Gillette, Wyo. (1,500 miles), a trip to Whynot for McCool, his family and his supporters is like a leisurely Saturday-afternoon drive.

Whynot Motorsports Park also happens to be one of the rare WoO LMS tracks where McCool won’t lack in the experience department to such tour titans as Darrell Lanigan of Union, Ky., Josh Richards of Shinnston, W.Va., Rick Eckert of York, Pa., Shane Clanton of Fayetteville, Ga., and Tim McCreadie of Watertown, N.Y. He owns a solid performance record at Whynot, recording five wins and 10 top-five finishes in 18 starts there since 2007.

McCool’s most recent victory at Whynot came in the track’s 2013 season opener on Saturday night. He tuned up for the speedway’s historic World of Outlaws show by capturing a Mississippi State Championship Challenge Series event.

“We’ve had quite a bit of success there over the years,” said McCool, who has earned four of his 10 career MSCCS victories at Whynot. “I always like racing there. It’s kind of a fast little deal, a big circle where you can race two- or three-wide – and sometimes even four-wide. Last year in the (season-ending) Fall Classic we ran three-wide for the lead for 50 laps.

“I would say it’s the best racing in Mississippi,” he added. “Back years ago it used to be follow-the-leader racing a lot, but (owner) Rodney (Wing) has just totally changed that place for the better since he took it over. He’s done a real good job with the surface.”

McCool, who won the 2012 WoO LMS Rookie of the Year award with one of the best seasons a first-year traveler has ever enjoyed (one win, nine top-five and 15 top-10 finishes), will enter Whynot’s World of Outlaws program riding a wave of momentum. He struggled for most of the tour’s season-opening eight-race swing through Georgia and Florida last month, failing to register a single top-five finish, but came alive over the past two weeks, preceding his Whynot score with a $10,000 triumph in the unsanctioned Pelican 100 on March 9 at Ark-La-Tex Speedway in Vivian, La.

Both of McCool’s feature wins came behind the wheel of a new Victory Circle by Moyer car, which he plans to campaign in the March 22-24 WoO LMS tripleheader. Whynot’s event is sandwiched by identical 50-lap, $10,000-to-win shows on March 22 at I-30 Speedway in Little Rock, Ark., and March 24 at Duck River Raceway Park in Wheel, Tenn.

“The season definitely didn’t start as well we wanted it to,” said McCool, who sits ninth in the current WoO LMS points standings with a top finish of sixth to his credit. “But I think we progressed some and got better during the trip, and then we brought out a brand-new car (at Ark-La-Tex) and it seemed to work pretty good. I think some of the things we learned in Florida we threw at this new car and it helped us, and now we’re gonna try it in the Outlaw shows and see what happens.”

The lone WoO LMS checkered flag of McCool’s career came early last season, on April 28 at Tazewell (Tenn.) Speedway, so it’s been 39 races since he stood in Victory Lane on the tour. He can think of no better place to snap that winless stretch than in his home state, where the WoO LMS has contested just five previous races in its history.

“It would mean a lot to win an Outlaw show in Mississippi,” said McCool, whose two career starts in WoO LMS A-Mains held in Mississippi (2011 at Columbus Speedway, ’08 at Pike County Speedway) resulted in early retirements. “It means a lot to win any big race, but doing it in your home state against all the best drivers, with so many of our fans watching, would be a big deal for us.”

General admission to Saturday’s program, which also includes racing for the NeSmith Crate Late Models, open-wheel Modifieds, Street Stocks and Pure Stocks, is $30 for adults, $15 for children ages 6-12 and free for kids 5-and-under. Pit passes will be $40.

More information is available by logging on to www.whynotmotorsportspark.com or calling 601-527-0084.