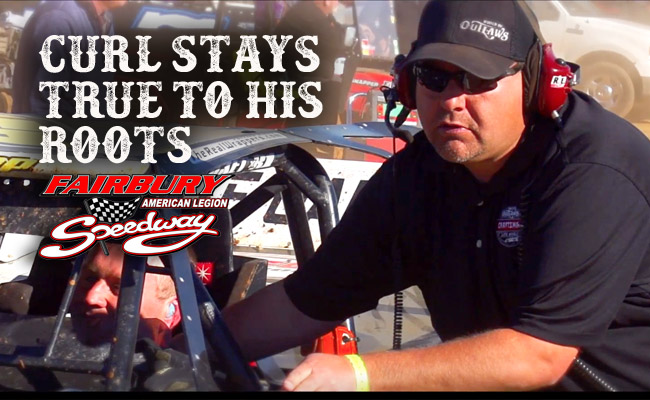 CONCORD, NC — Nov. 6, 2018 — World of Outlaws Craftsman Late Model Series Director Matt Curl — former promoter of Fairbury American Legion Speedway (FALS) and longtime Fairbury resident — will soon add Track Owner to his bio as he acquires a majority share of his beloved quarter-mile oval. Tonight, the American Legion made the official announcement to the Fairbury Fair Board, which will be realigned as a pivotal step toward a new arrangement that will position Curl at the helm.

“This is exciting news for our Series Director,” said World of Outlaws President Tom Deery. “It’s a testament to his ability — the very reason we chose him to lead our Series. He has already played an important role in making Fairbury one of the top tracks in America, and now he will lead that anchor track into the next era.”

When the Series brought Matt Curl into its fold last November, is was largely due to Curl’s impressive success as FALS promoter. But Curl’s history with the track runs deep, having served it in countless capacities throughout his career, from official to race director. His loyalty doesn’t stop outside the gates; Curl was born and raised in dirt-loving Fairbury, IL, and continues to call it home.

“I’ve known Matt Curl for a long time,” said longtime FALS supporter and DirtonDirt.com CEO Michael Rigsby, “and more than anything I know he’s not only passionate about our industry, but especially passionate about Fairbury. His love for racing was born there. His love for our sport was nurtured there, and there is no better person to steer Fairbury into its next phase than Matt. He’ll knock it out of the park at FALS again.”

Out on the southern edge of Fairbury the legendary 1946 semi-banked DIRTcar-sanctioned oval features Late Model, Street Stock, Sportsman, and Modified racing in a picturesque residential neighborhood with homes and schools, flanked by corn fields and dairy farms. And as the geography suggest, the community embraces its racing with unmatched passion

With this same passion, Curl took the reins of the World of Outlaws Late Model Series last November, leading with a soft-spoken steadiness — calm, collected and smart. And committed. Always committed. Currently putting the final touches on a well-thought-out, racey, 2019 racing schedule, Curl looks forward to an unprecedented season.

“My number one priority will be the Series this winter,” said Curl. “We will continue to develop the 2019 schedule and work with the teams and tracks to lay the groundwork for an outstanding season.”

The Series will soon announce the backbone of the 2019 schedule, the marquee events that form the basis of a great season for all — fans, drivers, tracks, promoters, sponsors, the Series, and everyone involved.