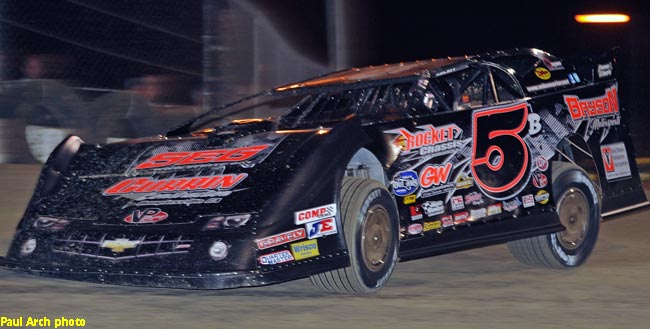 CONCORD, NC – March 13, 2012 – Mike Marlar is confident that he has the talent, experience and racing program to make some noise as a first-time follower of the World of Outlaws Late Model Series.

But does he have the other intangibles necessary to be a season-long success on the prestigious national tour? That’s what the 34-year-old driver from Winfield, Tenn., hopes to find out in 2012.

“We’d like to do the whole World of Outlaws deal this year and our owner would like for us to do it,” said Marlar, who is looking to broaden his dirt Late Model horizons in his first full season driving for Norman Bryson’s burgeoning team. “I also know the reality of everything. It’s a tough, tough deal, with a lot of great drivers and teams.

“You can feel like you’re experienced and have a lot of talent, but running up front consistently and winning races on this level comes down to a lot of different variables. Ultimately, it’s going be a matter of just how hard we want to work and how bad we want it.”

As the WoO LMS heads to Farmer City (Ill.) Raceway on March 30-31 for the fourth running of the $20,000-to-win ‘Illini 100,’ Marlar has already proven that he can be a serious contender. Last month he recorded two top-five finishes – and flirted with two more, including his first career WoO LMS A-Main victory – during the tour’s season-opening six-race swing through Georgia and Florida.

While finishes of fourth (Feb. 16) and fifth (Feb. 17) at Bubba Raceway Park in Ocala, Fla., were Marlar’s best of the trip, he was actually in position to string together four top-fives in a row. He was solidly in the top five midway through the 60-lap ‘Winter Freeze’ season opener on Feb. 11 at Screven Motor Speedway in Sylvania, Ga., when a scrape sent him bouncing through the infield and out of the race (he finished 25th), and in BRP’s 60-lap finale on Feb. 18 he led laps 1-42 and was bidding to regain command from Rick Eckert on the final circuit when he found himself squeezed into the turn-three wall (and left with a heartbreaking 18th-place finish).

Marlar struggled in the two WoO LMS events run during the UNOH DIRTcar Nationals Presented by Summit Racing Equipment at Volusia Speedway Park in Barberville, Fla., soldiering to a 13th-place finish on Feb. 23 and failing to qualify for the A-Main on Feb. 25 due to suspension problems. But he still left the Sunshine State sitting 11th in the points race, putting him in position to receive series travel benefits reserved for the top 12 drivers in the standings when he enters the Illini 100.

“We could’ve been in real good shape if we didn’t drop out at Screven and didn’t crash on the last lap at Ocala,” said Marlar, who trails points leader Darrell Lanigan by 184 points but is less than 100 points behind fifth-place Chub Frank. “That would’ve been a great start for us, but we can’t change things now. Hopefully we got our bad luck out of the way.”

The Georgia and Florida disappointments certainly didn’t dull Marlar’s enthusiasm for the 2012 campaign. While he’s an accomplished racer with more than 80 career dirt Late Model feature wins – including three $20,000-plus triumphs that factored into his WoO LMS Rookie of the Year application being voted down by the tour’s panel of veteran drivers and media members – he considers his pairing with Bryson to be his long-awaited Big Chance for national stardom.

“I’ve never had the opportunity to race with a program that’s a hundred percent about what we think we need to do to win races,” said Marlar, who has bounced between family-owned equipment and other rides since moving to dirt Late Models in 2003 following a four-year run in the UMP Modified division that saw him win over 100 features. “I’ve kind of had a rocky road, but it’s also been good for me. We’ve had a lot of tough circumstances we’ve had to deal with, but it’s made us stronger and more experienced.

“I feel like I’m maybe a little later than some people in getting my opportunity (for a top-notch fulltime ride), but now that I’ve got it I feel like I’m ready for it.”

Marlar hooked up with Bryson late last summer after chatting with Bryson’s brother, Earl, during the North-South 100 weekend at Florence Speedway in Union, Ky. With a solid recommendation from shock guru Gary Winger of GW Performance, Bryson decided to give Marlar a shot with his growing team that already included young Georgian Chip Brindle.

It didn’t take long for Marlar to flash his ability to Bryson. In his third start – and first behind the wheel of a new Rocket car – Marlar shined in the WoO LMS ‘Black Diamond 125’ on Sept. 3 at Tyler County Speedway in Middlebourne, W.Va., setting fast time, winning a heat race, finishing second in a 40-lap Qualifying Feature and placing a career tour-best third in the 45-lap ‘Sweet Sixteen’ finale.

Just six months later, Marlar is firmly entrenched as Bryson Motorsports’ primary driver following Brindle’s recent release from the team. He finds himself in an enviable situation, maintaining Bryson’s quality equipment (two Rocket cars, one Barry Wright mount, three Clements engines, one Hendren powerplant) at his own Volunteer State shop with the assistance of fulltime crewmembers Brian Imler and Josh Davis. Both mechanics live within minutes of Marlar and are experienced hands – Imler has spent time working on the road with several dirt Late Model teams, and Davis has been by Marlar’s side for much of the driver’s career.

“We talked about basing the team at my place and Mr. Bryson was all for it,” said Marlar. “He wants everybody to be in their comfort zones and that’s what we’re looking for too. To race and run good everybody has to have their home and family time too, not just be all racing all the time, and we’re trying to do that.”

Marlar speaks with reverence about the 44-year-old Bryson, whose Douglasville, Ga.-based company, SEG, provides a unique blend of maintenance and design/building services to commercial companies. Some of the firm’s specialties include reconstruction of truck stops and sales, service and installation of fluid-handling equipment for petroleum in retail, commercial and industrial markets.

“It’s been a blessing,” Marlar said of his opportunity to race for Bryson. “He’s a really, really good guy, and he’s got his heart in the right place on everything. He just wants us to have the best equipment, and he’s also worried about everybody’s personal situations. He kind of looks out for us and has done well for us.

“We’ve basically built a new team with him,” he continued. “He had some things to get started with, but we’ve just been building ever since we got together. He’s really stepped up to the plate and made a lot of sacrifices to get us everything we need to race.”

The future appears bright for Marlar, who sees all the elements for long-term success in Bryson Motorsports.

“There’s a few teams in the World of Outlaws that are just really, really strong,” said Marlar, who recently celebrated his second wedding anniversary with wife Stacy, a high school math teacher. “It’s hard to just whip a team like that up overnight, especially since those guys put every waking minute into being as good as they are. But I feel like we can get there. I don’t how fast, but I definitely think we have the potential.

Marlar’s next opportunity to show his team’s strength comes March 30-31 at Farmer City, a quarter-mile bullring that he’s visited just once previously. He finished 11th in the track’s 2007 DIRTcar Summer Nationals event.

“I’m looking forward to going back there,” said Marlar, who entered the 2012 season with 21 career WoO LMS A-Mains starts to his credit. “I don’t remember too much about the place because that was the year we ran the Summer Nationals and we raced so much it was hard to remember a lot of places, but I do remember that it seemed to be racy.

“I like Midwest racetracks and I’ve also heard about some really good races happening (at Farmer City), so I’m excited to run there.”

The Illini 100 weekend at Farmer City Raceway will feature time trials and heat races on Fri., March 30, and B-Mains and the 100-lap A-Main on Sat., March 31. The big addition to the weekend will be a 50-lap DIRTcar UMP Modified feature offering a whopping $5,000 top prize, with the open-wheel division running heat races on Friday evening and B-Mains and the extra-distance headliner on Saturday night.

This year’s Illini 100 weekend will also include racing for Farmer City’s weekly support classes. The DIRTcar UMP Pro Late Models, Street Stocks and Hornets will run complete programs on Fri., March 30, and the Pro Late Models and Street Stocks will return on Sat., March 31, to battle in regular racing cards.

Hot laps are scheduled to start at 6:30 p.m. on Friday and 5 p.m. on Saturday, with qualifying to immediately follow.

Advance tickets are available for purchase at www.worldofoutlaws.com/tickets or by calling the event hotline at 877-395-8606.

An open practice session will be held on Thursday evening, March 29. Pit passes will be $25 for the practice night, but Thursday’s pit admission can be included in an $85 three-day band.