Looking Ahead to the 2019 Schedule 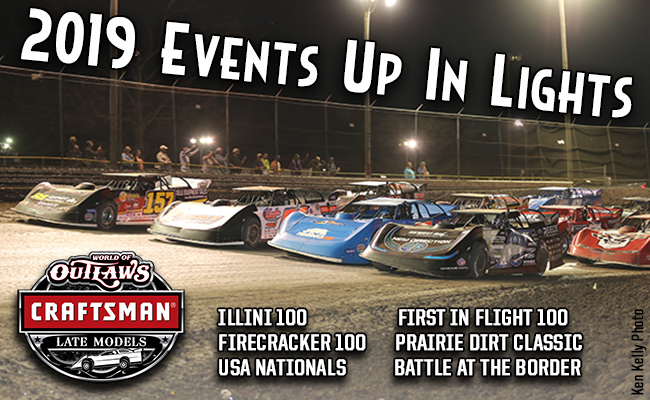 2018 marquee events are back in 2019, in addition to a new race at Sharon Speedway

CONCORD, NC – Nov. 19, 2018 – The 2019 World of Outlaws Craftsman Late Model Series tour will feature some of the biggest fan-favorite events in Dirt Late Model racing. While the full schedule will be released in early December, series officials are eager to share a series of monthly destination events, including a new, two-day Labor Day weekend race at Sharon Speedway in Hartford, Ohio.

It all gets rolling with the Winter Freeze on Feb. 8-9 at Screven Motorsports Complex, a 3/8-mile dirt oval in Sylvania, GA, where the Series first raced in 2008. That weekend sets the stage for four nights of action on Feb. 14-17 at the newly renovated Volusia Speedway Park for the 48th annual DIRTcar Nationals.

“We’re always excited about having the World of Outlaws here,” said Screven Race Director Kelley Carlton, who noted free camping in a designated area adjacent to the speedway and a full menu of fresh-cooked, non-traditional racetrack food available inside the facility. “This is our premiere event, a lot of money and prestige on the line. This event can either make or break a driver’s Speedweeks, so we try to have the track surface in excellent racing condition.”

As part of the 12-day DIRTcar Nationals extravaganza, the Outlaws will race four nights in a row in 50-lap, $10,000-to-win features. The Late Model racing action begins with the DIRTcar Late Models on Monday and Tuesday,

New to this year are the upgraded front grandstands to accompany new catch fences and outside walls that were installed prior to the 2018 DIRTcar Nationals. Construction on the new premium reserved sections is underway and slated to be completed before the event kicks off on Tuesday, Feb. 5.

In March, the Outlaws waltz into Tennessee for races on March 8 at Duck River Raceway Park in Lewisburg and March 9 for the Tennessee Tipoff at Smoky Mountain Speedway in Maryville. Chris Madden and Dale McDowell earned Outlaw victories in 2018 at Smoky Mountain, where the 2019 Tipoff will be a single-day, 60-lap event with $12,000-to-win.

The Outlaws then return to the Land of Lincoln for the 12th Annual Illini 100 on April 5-6 at the Farmer City Raceway in Illinois. The traditional Friday feature at the quarter-mile oval will be a 25-lap precursor to the 75-lap, $15,000-to-win finale.

Fayetteville (NC) Motor Speedway Promoter Jim Long spawned the First in Flight 100 last season to celebrate the track’s 50th anniversary season, and the event returns on May 10-11 for another $25,000-to-win show. Qualifying events go live on Friday, feature racing on Saturday. Jimmy Owens took the inaugural win this past season against a 34-car field, but the Outlaws will be looking to dethrone “The O-Show” in 2019.

“We’re really looking forward to having the Outlaws back again,” said Long, who was the Outlaws promoter of the year in 2016. “We’re striving further every year to make this a staple in the Late Model racing world, and that starts with making sure we bring out the best competition in the country.”

June is highlighted by one of the biggest events in Dirt Late Model racing, the 13th annual Firecracker 100 on June 20-22 at Lernerville Speedway in Sarver, PA. Chris Madden took home the $30,000 top prize in 2018, but local hero Mike Norris won the hearts of Lernerville fans when he captured the Friday night feature for the first Outlaw win of his career.

The can’t-miss Prairie Dirt Classic kicks off on July 26-27 at the Fairbury (IL) American Legion Speedway in 2019, celebrating 30 years of the prestigious race at the Fairbury facility. The ever-popular event format returns with four 25-lap preliminary features on Friday to set the first eight rows of the Saturday feature. The top four in each qualifier will transfer, top two to the redraw. Everyone else aims for the 10th Annual Prairie Dirt Shootout on Saturday evening, where the winner of that race has the option of taking the $2,000 check and loading up or starting from 29th in the 100-lap Classic for a chance at $30,000.

“It’s amazing how the PDC has grown to what it is over all the years”, said Series Director and new owner of the central Illinois dirt track, Matt Curl. “So many people have put a lot of time and effort into the facility, and making it now to the 30-year anniversary with all the success, they have a lot to be proud of. It wouldn’t be where it is today if it wasn’t for the partnership with the World of Outlaws coming aboard in 2013. They’ve allowed us to take it to the next level and into the future where the sky is the limit.”

The marquee events keep rolling the on following weekend when the series heads to New Richmond, WI, for the highest-paying event of the year — the 32nd Annual, $50,000-to-win USA Nationals on Aug. 1-3 at Cedar Lake Speedway. The Thursday race night will be the $6,000-to-win Outlaw show, while the Friday and Saturday portions of the event will feature the passing points format first implemented this past season. Click here to learn more. New to next year’s race will be a $3,000 check to start in Saturday’s main event, giving each and every team more of an incentive to come and race.

“Starting up a new event is always full of new opportunities,” said Sharon Promoter Dave Willoughby. “We’re prepared to put in the work necessary to make this one of the most exciting Late Model events to hit Ohio in recent years.”

Finally, the 2019 Series championship will wrap up with the 13th annual World of Outlaws World Finals at The Dirt Track at Charlotte in Concord, NC, Nov. 7-9. The three-day event will cap off the year with the $12,000-to-win, 50-lap features on Friday and Saturday to crown the Series champions.

The complete 2019 World of Outlaws Late Model Series Schedule will be released in the coming weeks. For tickets and other information to next year’s events, visit our homepage.