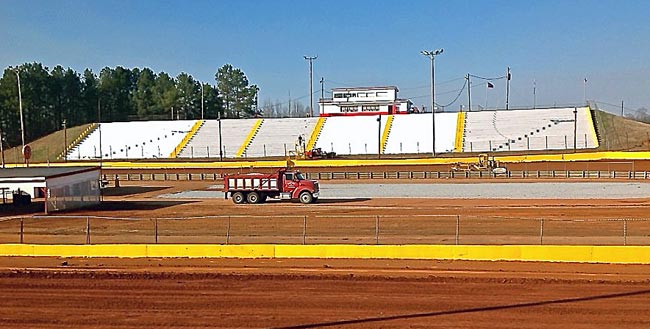 LAVONIA, GA – May 1, 2013 – Lavonia Speedway is ready for its return to the national dirt Late Model scene.

Less than two months into its comeback season following two years of inactivity and nearly a full decade since a major touring series last visited, the three-eighths-mile Peach State oval will host the World of Outlaws Late Model Series on Friday night (May 3). A 50-lap A-Main paying $10,000 to win tops the much anticipated program.

“I’d say this race is the biggest thing to ever hit here,” said Stan Lester, a veteran racer and dirt-track series organizer who is in his first season as a co-owner of Lavonia Speedway. “There’s tons of buzz around here about this show. People started coming by here (on Monday) to put their chairs up in the stands to save a seat.”

The first-ever WoO LMS event will continue the exciting new era at Lavonia, a venerable Northeast Georgia track that sat idle and decaying for the 2011 and ’12 seasons. The speedway was reborn after Lester, who oversees the 10-year-old FASTRAK Pro Late Model Series and three-year-old Ultimate Super Late Model Series, struck a partnership with track owner Max King last fall and began formulating plans to rebuild the facility and ink an aggressive schedule of weekly racing and special shows.

Crews started work on Lavonia Speedway last November and have barely stopped since. All that has been done to the place – including new fencing, expanded hauler parking, rebuilt restrooms, redone driveways and access roads, a cleaned-up spectator drive-in area, a reconfigured track and the application of much fresh paint – will be on display Friday in front of a crowd Lester expects to rank as the biggest of the season.

“I want people to walk in and go, ‘Wow!'” said Lester, 54. “Basically, it’s a completely different facility from when it was last open.”

The massive 4,000-plus-seat concrete grandstand (“We put about a thousand gallons of paint on it,” reported Lester) will provide spectators unmatched views of a track that definitely isn’t the old Lavonia Speedway.

“The racetrack has been reshaped completely with higher banks,” said Lester. “The banking is a little higher going into (turn) one and lower coming off two, and the banking going into (turn) three is high and levels off into four. It makes it pretty interesting to drive. Both corners, although shaped almost exactly alike, are completely different with the banking.”

“He does a great job and he’s a personal friend as well,” Lester said of Brown. “He helped us during the winter when we reconfigured the track, and he’s spending the (WoO LMS) week here to work the track and teach one of our guys how to do it.

“He can prep a track as good as anyone in the Southeast, so I’m expecting him to give everyone an awesome track to race on this Friday.”

The last time a national touring series competed at Lavonia was in September 2003 when the old Hav-A-Tampa/Xtreme circuit stopped in for a race won by Dennis ‘Rambo’ Franklin of Gaffney, S.C. From 2004-2010 the most lucrative annual dirt Late Model events at Lavonia was sanctioned by the regional Southern All-Stars Series.

Lester hopes that Friday’s return of a high-profile national tour will bring Lavonia the type of attention that springboards it to a long run as an influential track. He believes all the ingredients are in place.

“We’ve got a pretty good combination,” Lester said of Lavonia’s management team. “My partner Max King has been with the racetrack for the previous five years and has the local experience. Brad York is our general manager and knows the place well from working there in the past. And I’m kind of more the marketing guy, someone who brings the experience of traveling all over the country and seeing different tracks and things that work and don’t work.

“We’re just getting started here (the track reopened in early March with a special ‘Late Model Mania’ event headlined by the Ultimate Super Late Model Series and has hosted two weekly shows), but there’s plenty of potential. We’re hoping everybody who comes out on Friday is impressed.”

The traveling WoO LMS contingent will be led to Lavonia by a pair of well-known Georgians: Shane Clanton of Zebulon, who enters Friday’s action sitting second in the tour points standings, and Clint Smith of Senoia, who finished fourth in March’s Ultimate Series event at Lavonia.

Among the Southeast standouts expected to challenge the Outlaws are Riley Hickman of Ooltewah, Tenn., who won March’s Ultimate Series event at Lavonia; Casey Roberts of Toccoa, Ga., a winner of Southern All-Stars races at Lavonia in 2004 and ’10; Mike Marlar of Winfield, Tenn.; Ray Cook of Brasstown, N.C.; Jeff Smith of Dallas, N.C.; and Tony Knowles of Tyrone, Ga.

All Lavonia Speedway gates are scheduled to open at 12 noon on Fri., May 3. The drivers’ meeting is set for 6:45 p.m., followed by a 7 p.m. autograph session with WoO LMS drivers at the souvenir trailers behind the grandstand and hot laps at 7:30 p.m.

Friday’s program, which also includes racing for the FASTRAK Pro Late Models ($1,000 to win), Modified Streets and the Front Wheel Drive division, carries a general admission price of $25 for ages 13-and-up. Kids 7-12 are $10 and children 6-and-under will be admitted free of charge. Pit passes are $35 for ages 13-and-up, $15 for kids 7-12 and free for children 6-and-under.

Lavonia Speedway is located at 5941 Lavonia Highway in Lavonia, Ga., just a short distance off of Interstate 85.

Friday’s program kicks off a weekend doubleheader in Georgia for the WoO LMS, which will visit Swainsboro Raceway on Saturday night (May 4).