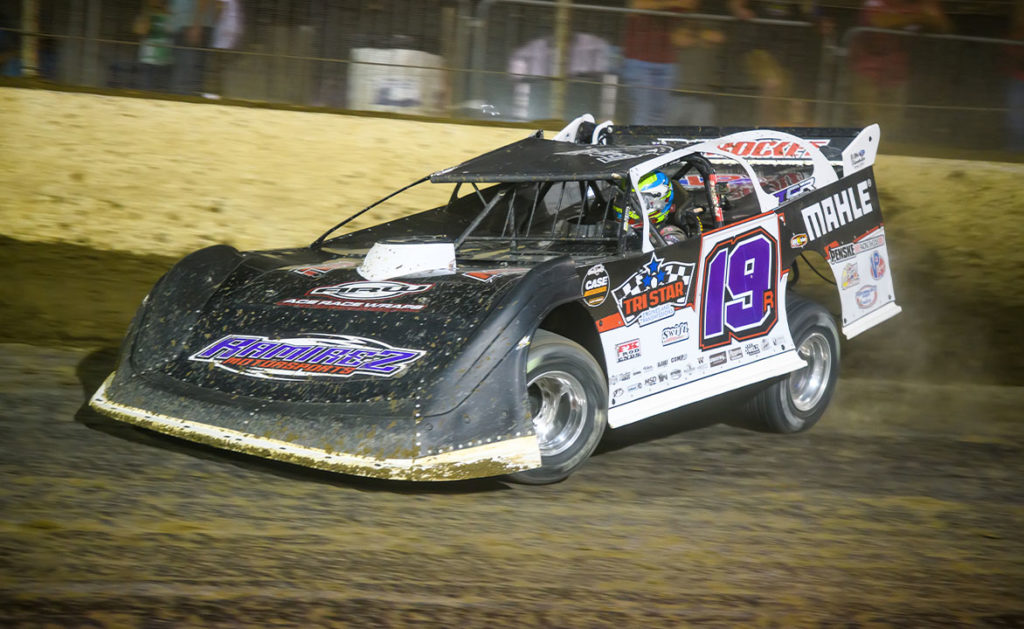 The Marshalltown, IA driver enters the Hawkeye 50 searching for a home state win

Of all the words of wisdom famous basketball coach John Wooden shared during his time at UCLA, the one he’d probably repeat for Ryan Gustin is, “All of life is peaks and valleys. Don’t let the peaks get too high, or the valley’s too low.”

As the World of Outlaws CASE Construction Equipment Late Model Series returns to Gustin’s home state on Monday, July 25, for the Hawkeye 50 at Boone Speedway, the Marshalltown, IA driver has experienced both.

The high: Gustin won his first career World of Outlaws CASE Late Models Feature at Sharon Speedway in May.

The low: Heartbreak has struck “The Reaper” multiple times, including a part failure while running second at Red Cedar Speedway last weekend.

While Gustin continues his battle for success in his second year with the Series, he echoes Wooden’s mindset.

“It sucks sometimes,” Gustin said. “Like [Sunday at Red Cedar], I felt like I had the car to win and just broke the rear end. I mean, there’s not really any perfect way to balance it. You just have to take the highs with the lows without the highs getting too high and the lows getting too low.”

Even though he’s trying to balance those peaks and valleys, he feels he’s moving toward the top of the mountain. Gustin believes he’s one of the cars to beat night in and night out, especially when his team is hitting its marks.

“I think that most of the time, when we put a whole night together, we are one of the top guys,” Gustin said. “It seems like our Qualifying has been off a little bit this year to where last year we qualified good but didn’t race good. Once we find the balance between Qualifying and Feature time, we’ll be fine. It’s just that Qualifying has been kicking our ass this year.”

Those challenging qualifying runs have forced “The Reaper” to work his way through the field on several occasions this season. However, it’s a challenge that doesn’t faze him. He’s developed a “never say die” attitude on the racetrack, especially when he can bang the right rear of his car off a cushion.

“It’s kind of what I’ve always had,” Gustin said. “I’m kind of used to starting in the back anyway with the draw/redraw stuff with [The United States Modified Touring Series] stuff. So, you have to find the fastest lane before everyone else does, and that’s why I’m considered a cushion guy because that’s normally the fastest lane most of the time on the racetracks that have a cushion. You got to get up and get after it before everyone else does to get around them.”

Gustin’s next chance to reach the World of Outlaws CASE Late Models peak comes less than an hour from his Marshalltown, IA, home in Boone. He’s excited about the opportunity to climb out of his current valley and try to find himself $20,000 richer at the Hawkeye 50.

“It’s nice to only be 45 minutes to an hour away from home for once, instead of 12 hours,” Gustin said. “It would definitely mean a lot to get a win in Iowa near home. It would be badass.”

The Iowa driver will continue to lean on Wooden’s words of not letting the peaks get too high and the valleys too low in his quest for success.

Gustin and The Most Powerful Late Models on the Planet return to battle on Monday, July 25, for the Hawkeye 50 at Boone Speedway in Boone, IA.