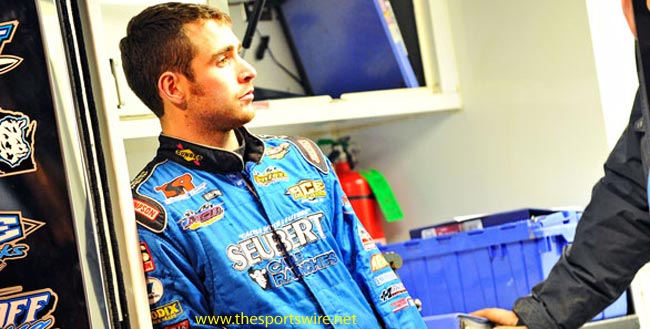 WINCHESTER, VA – June 14, 2011 – Josh Richards is overdue to win an A-Main on the World of Outlaws Late Model Series.

Lucky for him, then, that the national tour’s first action following a month-long break will come this Saturday night (June 18) at Winchester Speedway, a Virginia track that has treated the 23-year-old superstar very well for the past two years.

Thanks to seven wins in his last nine starts at Winchester, Shinnston, W.Va.’s Richards stands as the consensus favorite to capture Saturday’s Gunter’s Honey Spring 50. The inaugural WoO LMS event at Winchester, which was rescheduled from its original May 14 date due to rain, boasts a $10,000 top prize.

That cash is attractive but simply reaching Victory Lane would be reward enough for Richards, who enters Winchester’s program uncharacteristically winless in 10 WoO LMS starts this season. The circuit’s two-time defending champion hasn’t gone this deep into the World of Outlaws schedule without a triumph since 2006 – his second full season on the tour – when he grabbed his first checkered flag in late August.

“I definitely want a win bad,” said Richards, who won the WoO LMS season opener at Florida’s Volusia Speedway Park annually from 2007-2010. “It’s hard to believe we haven’t been able to win an Outlaw show yet, but it’s not like we’re struggling. It seems like we’ve always had a fast car at least at some point during the night every time out this year, but whether it’s been a bad draw, the wrong tire (selection) or bad luck, we just haven’t gotten the job done.”

Richards is currently second in the WoO LMS points standings – 28 points behind leader Rick Eckert of York, Pa. – and his five top-five finishes (one second, three thirds and one fourth) are topped only by the seven booked by four-time ’11 winner Darrell Lanigan of Union, Ky. But he “hasn’t gotten the breaks we’ve needed” to bust out, as evidenced by his heartbreaking losses in the Feb. 17 season opener at Volusia (he smacked the cushion while leading late in the distance and subsequently broke a wheel) and the ‘Cash Cow 100’ on March 19 at Columbus (Miss.) Speedway (he was sent spinning out of the lead on lap 61 from contact as he attempted to lap Clint Smith of Senoia, Ga.).

“Considering the way the last two years went so well, you always expect something (unfortunate) eventually has got to happen,” said Richards. “We’ve experienced some of that already this year. We’re working hard, racing as hard as we can and doing everything in our power to win races, but it doesn’t always work out. You’re gonna have some bad luck, and all these other guys (on the series) are working just as hard so it’s not like you can just expect to go out and win every race.

“We’re just keeping our heads up, staying at it and not worrying about not having a win yet. If we keep that attitude, we’ll be O.K.”

A visit to Winchester, of course, figures to be a good tonic for Richards. He’s become a master of the one-third-mile oval, winning five times there in 2010 – a spring Three State Flyers Series event, the dirt Late Model segment of the Winchester 200 and the Raye Vest Memorial, plus preliminary features during the 200 and Vest weekends – and twice already in 2011 (the opener on April 9 and the Appalachian Mountain Speedweek event on June 5).

“I love going there,” said Richards, who has collected over $30,000 in first-place earnings from Winchester owner and promoter Greg Gunter over the past two seasons. “The first time I ran there was back in ’08 and it’s just gotten better and better every year. Greg has done a phenomenal job cleaning the place up and making improvements since he took over (in 2009), and now it’s one of the best places around to go to.

“When (Winchester’s surface) gets dried out and has brown way out wide and a little bit on the bottom, you can race all over it. I think the Outlaw deal is going to be a great show.”

Richards will have to make one adjustment on Saturday night: he’ll be behind the wheel of his father Mark’s Kentucky Fuel Corporation/Seubert Calf Ranches Rocket No. 1 at Winchester for the first time in his career. All of his previous appearances – and triumphs – there have come driving the Ernie Davis-owned Rocket No. 25, which he runs in most of his non-WoO LMS events.

“The pressure’s on now,” Richards quipped when asked about his car switch. “Really, though, everything is the same on the two cars except for the engine combination. Ernie’s car runs great there and I don’t see why we won’t be able to get our car to run like that too.

“Winning an Outlaw race at Winchester would definitely mean a lot,” he added. “It’s basically Ernie’s hometrack, so even though I won’t be in his car I’d like to win in his backyard. And it’s one of the closest tracks (on the WoO LMS) to home for us, so that makes it an important race for us.”

Richards, who needs a victory to grab sole possession of first place on the WoO LMS win list since 2004 (he’s tied with Steve Francis at 28 wins), will compete at Winchester after running the Venturini Motorsports No. 25 in Friday’s ARCA Racing Series 200 at Michigan International Speedway. And he said that next week he expects to begin test sessions in NASCAR star Kyle Busch’s Toyota Tundra Truck, which Richards has signed to drive in 11 NASCAR Camping World Truck Series events during the second half of the 2011 season.

Richards will have to outduel a star-studded group of WoO LMS regulars at Winchester. Joining him in the field will be former tour champions Lanigan and Tim McCreadie of Watertown, N.Y.; Eckert, whose long history of success at the track includes two Winchester 200 victories and the 2010 Appalachian Mountain Speedweek event; 1998 Winchester 200 winner Chub Frank of Bear Lake, Pa.; ’10 Rookie of the Year Austin Hubbard of Seaford, Del., who finished third on June 5 at Winchester; Georgians Clint Smith of Senoia and Shane Clanton of Fayetteville; Tim Fuller of Watertown, N.Y.; Vic Coffey of Caledonia, N.Y.; Jill George of Cedar Falls, Iowa; and ’11 Rookie of the Year contenders Pat Doar of New Richmond, Wis., Ron Davies of Warren, Pa., and John Lobb of Frewsburg, N.Y.

General admission for Saturday’s racing program, which also includes Winchester’s Pure Stock and U-Car divisions, is $30 for adults and $5 for kids 6-12. Pit passes are $40.

Pit gates will open at 2 p.m. and spectator gates will be unlocked at 4 p.m. Hot laps are scheduled to begin at 6 p.m. and time trials will commence at 6:30 p.m.