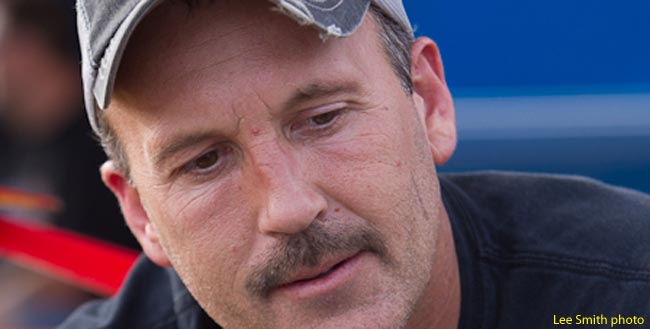 The 43-year-old driver from Watertown, N.Y., certainly isn’t ruling out the possibility of another magical visit to the North Dakota track.

Racing at the quarter-mile oval where he broke through to capture his first career World of Outlaws Late Model Series A-Main in 2007, Fuller is hopeful of breaking down a different barrier when the national tour contests its sixth annual 50-lap, $10,000-to-win ‘Wild West Tour’ event on Friday night (July 15).  He hasn’t won on the full-fender circuit in over a year and has yet to score a single top-five finish since debuting his own team three months ago.

Considering Fuller’s struggle to get rolling in 2011, his chances of reaching Victory Lane at River Cities on Friday might not seem very strong. But then few people – not even Fuller himself – thought he would go out on June 12, 2007, at River Cities and capture his first-ever WoO LMS checkered flag so early in his rookie season, so maybe there are some parallels to boost his hopes of a slump-busting triumph four years later.

“No matter when or where you get a first win, it’s always a little bit of a surprise,” said Fuller, a regular on the Northeast’s DIRTcar Big-Block Modified trails before shifting his focus to the WoO LMS. “But winning my first Outlaw race at Grand Forks? All the way up in North Dakota? Yeah, that was a surprise.

“I would say it would be a surprise to win again there (this year) with the way our year has been going,” he continued. “But if we start up front and get some breaks, I think we could win. We pulled it off before when we didn’t expect it so we know it’s possible.”

Fuller will never forget his milestone victory at River Cities, a track that has become known for producing exciting, drama-filled WoO LMS events. He put on a spectacular display of traffic driving, slipping by West Virginia’s Eddie Carrier Jr. for the lead while negotiating a flurry of lapped cars with just four laps remaining.

“It was a heck of a race between me and Carrier,” recalled Fuller. “We were in lapped traffic racing for the lead, and that’s wild because at Grand Forks everything’s happening in a hurry. It’s a fast, racy place with really good clay.

“Really, though, we picked the right tires that night – that was the whole key. We had on 1300-1400 (compound Hoosier rubber) and nobody else did, so we were just right-on. Sometimes having the right tire like that is all it takes.”

Fuller hasn’t hit on the hot combination in the last three WoO LMS stops at River Cities – he was 10th in ’08 and 20th in ’09, and last year he limped to a 16th-place finish racing at less-than-full-strength just four days after undergoing an emergency appendectomy. But in ’07 he had shown only fleeting signs of success before busting out at River Cities, and this year he’s flashed only fleeting signs of success through the first 15 events of the season, so…

Maybe Fuller, whose stint driving John Wight’s Gypsum Express equipment ended in mid-April when he secured sponsorship from Chad Sinon’s North Wales, Pa.-based BPG Inc. and purchased one of Wight’s Rocket cars, is ready to come alive. The driver who owns 12 career WoO LMS wins – including a personal-best seven victories in ’09 – has been inching his way back into contention on the tour.

“We got a late start on this deal so we’re never gonna be totally caught up until the season is over,” said Fuller, who is riding a 41-race winless streak since his last WoO LMS triumph, on June 17, 2010, at Merrittville Speedway in Thorold, Ont. “I only have one car and I don’t have an endless supply of tires, parts and spares, but I do have two motors now (he recently began running a new powerplant constructed by noted DIRTcar Big-Block Modified engine builder Kevin Enders of Phoenix, N.Y.) so we’re improving our program. We’re gaining on it.

Fuller’s top finish on the WoO LMS this season is sixth, on May 12 at Delaware International Speedway. He has only two other top-10 finishes (seventh on June 24 at Lernerville Speedway in Sarver, Pa., and 10th on May 8 at Needmore Speedway in Norman Park, Ga.), hasn’t led an A-Main lap and ranks a distant ninth in the points standings.

“Right now, I’ll be happy with a top-five (finish) any night,” said Fuller. “Not to cry the blues, but we’re just a little under-gunned in terms of equipment.

“I still think we can win one this year, though,” he continued. “It would be neat if it happened on this (‘Wild West’) trip.”