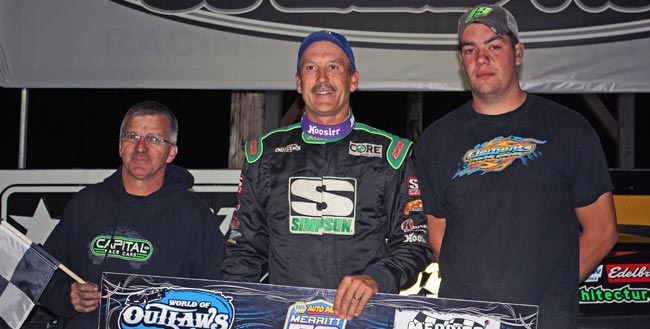 LITTLE VALLEY, NY – Aug. 20, 2013 – Tim Fuller will have the distinctive look of a reenergized race car driver on Thursday night (Aug. 22) when he competes in the second annual World of Outlaws Late Model Series event at Little Valley Speedway.

Hot off his first victory on the national tour in over three years, Fuller heads into the mid-week 50-lap, $10,000-to-win A-Main at the half-mile fairgrounds oval in his home state with the morale-sapping weight of a long slump finally removed from his shoulders.

Fuller, 45, of Watertown, N.Y., was triumphant in last Saturday night’s WoO LMS feature at Merritt Speedway in Lake City, Mich., snapping a 133-race winless streak dating back to his last checkered flag on June 17, 2010, at Merrittville Speedway in Thorold, Ont. It was also his first World of Outlaws win since joining the high-profile Kennedy Motorsports operation just over one year ago as a teammate to Shane Clanton of Zebulon, Ga.

“That win was needed so bad,” said Fuller, a former DIRTcar Northeast big-block Modified regular who has followed the WoO LMS religiously since earning Rookie of the Year honors in 2007. “Look, wins are good for everybody. It reassures a lot of confidence in (team owner) John Kennedy, (Capital Race Cars builder) Marshall Green, myself and the crew and makes everybody’s mood better.

History would seem to paint Fuller as a likely candidate to make a quick return to Victory Lane. He tends to win WoO races in bunches, after all. In amassing 12 career triumphs from 2007-2010, he scored back-to-back wins in both ’08 and ’10 and in ’09 put together a sizzling stretch of seven wins in 11 races, including a then record-tying streak of four consecutive victories.

“I’d love to see that pattern continue,” smiled Fuller, who sits sixth in the WoO LMS points standings with 12 events remaining on the 2013 schedule.

It’s been an often tortuous road back to the World of Outlaws spotlight for Fuller, who split with Gypsum Racing team owner John Wight early in 2011 and fielded his own underfunded dirt Late Model effort until hooking up with Kennedy Motorsports during the summer of ’12. Even after his career-saving hiring by Kennedy – he had blown up the last engine in his stable just before the Phoenix-based businessman offered him a ride – he struggled to break through on the WoO LMS.

Entering last Saturday night’s event at Merritt, Fuller had made 48 WoO LMS starts in Kennedy Motorsports equipment and finished among the top five just five times (four this year) and top 10 on 22 occasions (18 this season). He finished as high as second twice – both this year, on May 25 at Tyler County Speedway in Middlebourne, W.Va. (a last-lap loss to Josh Richards of Shinnston, W.Va.) and June 25 at Canandaigua (N.Y.) Motorsports Park – but admitted that it was difficult for him to simply count those near-misses as stepping stones to the winner’s circle.

“You take that deal at Tyler County – to have that happen was tough, about as bad as it gets,” said Fuller, who was overtaken by Richards rounding the final turns. “I did screw it up; I’ll be the first to admit that I should’ve blocked the bottom. But when that happens – and then a month later we go to Canandaigua and we’re fast enough to get to (racer winner) Bub (McCool) but it just doesn’t happen – well, you feel like, Maybe it’s just not meant to be. For whatever reason, it was just not working out.”

A veteran racer who has made his living behind the wheel of dirt-track machines for nearly two decades, Fuller forced himself to keep his chin up through all the struggles. With quality equipment under him and continued support from Kennedy, his crew and his family, he knew, deep down, that brighter days were ahead.

“You know you can do it because you’ve done it before, but everything has to come together for it to happen,” said Fuller. “You gotta get things matched to the way you drive, and that has taken awhile because we’re still learning the new (Capital) car.

“I know our cars are good though. I told Kennedy two weeks ago, ‘Don’t look at the results here. Our car is good and we’re gonna show it soon.’

“Me, Clanton and Marshall, we’ve actually stumbled on some stuff that’s pretty good,” he added. “That’s what we’re looking for – something that’s good almost anywhere so all you have to do is tweak it a little bit. I knew we were getting better and better with the car, so it was a matter of time.”

The correct tire choice for Merritt’s A-Main surface was the game-changer that sent Fuller vaulting out of his frustrating funk. With the softest allowable Hoosier compound under the event’s tire rule bolted on his No. 19, he glided forward from the 14th starting spot to pass race-long pacesetter Clint Smith of Senoia, Ga., for the lead on lap 40 and held off upset-minded Michiganders Eric Spangler and Rich Neiser for a dramatic victory.

“We essentially didn’t get talked out of the tire that I wanted to put on,” said Fuller. “I knew what I wanted to do and usually outside sources try to talk you out of it, but I just decided I’m not doing that no more. I’m gonna do what I want to do, and this time it worked out.

“I knew it was the right tire for the track, but I also didn’t know if it would make it because I knew it was too soft. I said, ‘If I can start out fast and then keep the pace slow and save the right-rear, then maybe it could make it.’ I thought I could at least give it a whirl.”

Fuller had enough rubber to reach the finish line first, putting him in an exhilarated state of mind that he hadn’t experienced on the WoO LMS in far too long. He spun celebratory donuts with his car in Merritt’s infield and was greeted in Victory Lane by his wife Lori, 8-year-old daughter Ainsley and overjoyed crewmen Ross Robinson and Eugene Mullaney.

Seeing the emotion displayed by Robinson, a 23-year-old from Georgetown, Del., who has been Fuller’s chief mechanic since the New Yorker arrived at Kennedy Motorsports, gave Fuller a special sense of satisfaction.

“For me, it’s a living. For me, it’s a boost of confidence,” Fuller said of his victory. “But for the guys, especially for Ross, it’s everything for him. He was so excited. He really loves racing and we’ve traveled all over and struggled, so to finally get one like that – he was pretty emotional.

“That makes me happy. He was so happy when we won at Hesston (Speedway in Pennsylvania last year) and in Arizona (in January), but I knew he wanted to win an Outlaw race. I was telling Kennedy (afterward), ‘He was so happy you would’ve sworn I passed Al Unser on the last lap at Indy.’ He was that excited, and that’s so cool.”

Robinson, who does some dirt Late Model racing of his own in a family-owned car when he’s able to get back to Delaware during the season, spelled out his feelings in a post to his Facebook page on Sunday.

“When I left home to be a crew chief on the Outlaw tour I always hoped that I would get to stand in the winner’s circle as the winning crew chief,” wrote Robinson. “Well, two-and-a-half years later, it finally happened (Saturday) night in Michigan and it was well worth all the late nights and long hours. Hopefully it’s not the last.”

Fuller will attempt to keep the good vibes flowing on Thursday night at Little Valley, fast, demanding track southeast of Buffalo that Fuller visited for the first time last year.

“It’s damn flat – flatter than I ever thought it would be – and it’s big,” said Fuller, who finished 11th in last year’s WoO LMS A-Main there after pitting midway through the 50-lapper to change a flat tire. “I’ve never really seen a place like that other than something like Williams Grove (Speedway in Mechanicsburg, Pa.) You go down fast into the corners, so you need some brakes to get slowed down to turn and head in the other direction.

“We were pretty good last year before we got the flat tire, but I think we’ll probably see a different track (surface) this year. They said the track was a lot drier than it normally is for last year’s race, so it could be totally different this time and we’ll have to adjust to it.”

Thursday night’s program, which also includes racing for the BRP CanAm Late Model Series and the E-Mods, is scheduled to begin at 7 p.m.

Pre-race tickets are available for purchase with a MasterCard or Discover Card by phone at 716-938-9146 or at the fairgrounds.

Pit passes are $35 and must be purchased at the Speedway on the day of the event. No one under 16 is allowed in the pits.

The Fairgrounds are located on Rt. 353 in Little Valley, N.Y., just north of the Salamanca exit off Interstate 86 and just eight miles west of the resort town of Ellicottville, N.Y., on US 219.

After Thursday night’s event, the WoO LMS will travel to Winchester (Va.) Speedway on Saturday night (Aug. 24) for the running of the Raye Vest Memorial.