Down & Dirty 100 Returning To Berlin 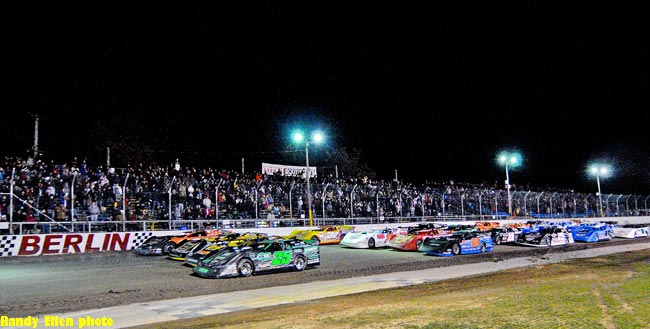 Second Annual Keyser Man. Down & Dirty 100 by NAPA On Sept. 20-21 At Berlin Raceway Is Can’t-Miss Event For All Short-Track Fans

MARNE, MI – March 22, 2013 – The clay is going down on Berlin Raceway’s pavement again for a season-ending spectacular – and considering the thrills produced by last year’s Keyser Manufacturing Down & Dirty 100 Presented by NAPA Auto Parts, the second annual World of Outlaws Late Model Series event on Sept. 20-21 should hold red-circle status on every short-track fan’s calendar.

The inaugural Keyser Manufacturing Down & Dirty 100 Presented by NAPA at Berlin – a truly historic event that took the venerable 7/16th-mile asphalt oval back to its dirt-track roots – drew rave reviews from fans and competitors alike, prompting speedway officials to reprise the successful extra-distance format in 2013. The weekend will include WoO LMS time trials and qualifying heats on Fri., Sept. 20, and last-chance races and the 100-lap, $20,000-to-win A-Main on Sat., Sept. 21.

“We talked about changing the weekend schedule a bit this year and running two separate World of Outlaws Late Model Series programs,” said Berlin Raceway general manager Mike Bursley. “But we decided to stick with the one big show paying $20,000 to win. It worked so well last year and we think the Keyser Manufacturing Down & Dirty 100 Presented by NAPA will be even bigger and better this year.”

“It was just a phenomenal race,” Bursley said of last year’s Down & Dirty 100, which featured side-by-side action and position swapping throughout the distance and Lanigan’s late-race pass of Moyer for the lead. “There was nothing boring about that race. It just got better the longer it went – you were on the edge of your seat the whole way.

The stage was set for the memorable racing by Berlin’s dirt surface, which was created using over 10,000 yards of trucked-in clay. With Canandaigua (N.Y.) Motorsports Park promoter Jeremie Corcoran overseeing track prep, the condition of the speedway exceeded even Berlin management’s wildest expectations.

“We were a little nervous about the track – everyone was, really, because we were trying something totally new,” said Bursley. “But it held up great. It was almost like there were four racing grooves – there was a bottom, there was racing room just up a lane, and then there was the middle and way up top.

“Jeremie did an unbelievable job – and you better believe we’ve been in contact with him to come back and prepare the track again this year.”

Transforming Berlin from an asphalt track to a dirt speedway will be a significantly less strenuous exercise this year because all the clay is already on the property, stored in piles just off the backstretch since it was scraped off last fall. The clay will be reapplied shortly after Berlin’s pavement season comes to end on Aug. 30-31 with the second annual Chet Championship Weekend.

Bursley said this year’s Keyser Manufacturing Down & Dirty 100 Presented by NAPA weekend will once again kick off with an open practice session on Thurs., Sept. 19, and DIRTcar UMP Modifieds and another support division will join the WoO LMS on both Fri., Sept. 20, and Sat., Sept. 21.

Berlin will also expand its dirt racing schedule in 2013 to three weekends, Bursley revealed. The speedway will host the finale of the All-Star Performance Michigan Dirt Cup UMP Late Model series on Sat., Sept. 14, and a dirt-track weekend featuring divisions to be announced will be held on Sept. 27-28. In addition, Berlin officials are considering adding a special mid-week dirt event sometime in September.

The Down & Dirty 100 is, of course, the centerpiece of Berlin’s dirt competition, and Bursley is very excited about the weekend’s prospects. The combination of positive vibes associated with last year’s events and some help from Mother Nature should make Berlin’s second annual WoO LMS extravaganza grow at both the front and back gates.

“We’d love to have sunny skies and 70-degree temperatures in the forecast this year so the weather won’t be an issue for people coming from long distances,” said Bursley. “We had a lot of people from Minnesota, Wisconsin, Illinois, Indiana and Ohio calling the morning of the (Down & Dirty 100) last year asking about the weather, and afterward we had some of them call back and say, ‘We really wish we would’ve been there, but weather was just too uncertain with how far we had to drive.’

“We ended up having a great crowd, but if we can bring in more of those out-of-state fans this year we’ll fill up all our seats.

“We’re hoping to draw even more cars too,” he continued. “Just from the reputation of the event and how well the track held up and many grooves there were to race in, you have to believe more race teams will want to come out and race.”

Tickets for the Keyser Manufacturing Down & Dirty 100 Presented by NAPA weekend are now available for purchase on-line at www.berlinraceway.com or by calling the track office at 616-677-5000.

The latest information on the event is also available by logging on to www.berlinraceway.com or calling the speedway.