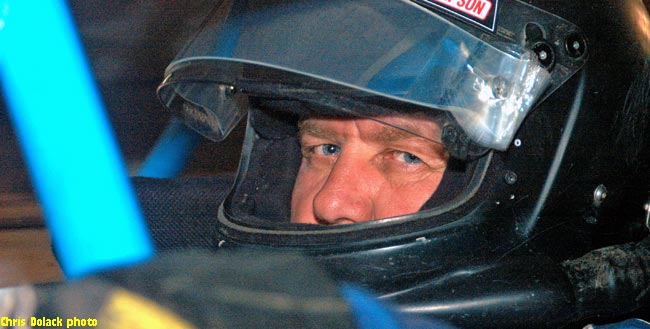 BUSTI, NY – May 30, 2013 – Whenever Chub Frank competes at Stateline Speedway – as he will this Saturday night (June 1) when the World of Outlaws Late Model Series visits the track for the first time in seven years – he takes a trip down memory lane.

The half-mile clay oval is, of course, a major part of Frank’s life. His father, Jerry, helped build the speedway in 1956 and co-owned it for nearly three decades, so Frank basically grew up there. He attended his first race at Stateline, turned his first laps in a packer truck there, ran his first race in a Spectator car there, made his dirt Late Model debut there….

“There were a lot of things that were ‘firsts’ for me at Stateline,” Frank said with a sly smile as he thought back on all his days spent at the track. “We used to have a good time at Stateline. We hung out there a lot.”

Yes, Stateline Speedway is a special place for the 51-year-old WoO LMS regular, who spent his childhood living just five minutes from the track, in Sugar Grove, Pa., and today resides about 10 minutes away, in Bear Lake, Pa. He hasn’t raced weekly at Stateline for more than two decades, but the roots of his racing career remain deeply planted in its soil.

Frank wasn’t yet born in ’56 when his father joined with four other local men – his brother Don Frank, Leonard Briggs (the future father-in-law of Pennsy dirt Late Model racer Ron Davies), Lloyd Williams and Marv Thorpe – to construct Stateline Speedway on 100 acres of land they obtained near the New York/Pennsylvania border. But once little Chub entered the world in January 1962, it was only a matter of months before he was spending Saturday nights at the track. With his father entrenched as a co-owner of the track and tasked with preparing the racing surface, his mother working there as a scorer and in other capacities and a number of family members helping out as well, Stateline Speedway was naturally going to become young Frank’s second home.

When Frank was a toddler, he started pulling his weight at the speedway. He began by circling the track in a packer car.

“I sat on my Uncle Cork’s lap and drove a packer car when I was four,” remembered Frank. “Then the next year, when I was five, I was driving a packer car by myself. I’d just drive that thing around there, over and over, every week.

“I got a million laps on that place, packing that track.”

As he became a teenager, Frank’s duties at Stateline steadily increased.

“I had a bunch of jobs up there,” he said. “I mostly drove the packer cars and picked garbage, but I’d also run the water trucks, the York rake, the brush hog. I did a lot of painting. And I’d help dig post holes (for the steel guardrail) with idiot sticks – I remember that because that sucked. Nobody likes digging holes with idiot sticks, which is why I was so glad when they finally poured walls with concrete. Somebody would hit those old steel guardrails and break ’em every week, and then we’d have to fix ’em.”

In 1978, when Frank was a 16-year-old high-schooler, he paid $75 for a 1969 Chevrolet Impala at a dealership in Randolph, N.Y., and prepared it to race in Stateline’s Spectator class. It was a no-frills effort right down to the way he transported the machine to the track for his first competitive circuits.

“We built our own tow bar and flat-towed it to the track,” said Frank. “If we wrecked, we just drove it home. We did that a few times after the races. We might even have had a couple wrecks on the way home – you never know.”

The first victory of Frank’s career came in his rookie Spectator season. He remembers the triumph well.

“I think we won our first race in May of that year,” said Frank (pictured below right after a 1980 Spectator victory at Stateline). “They gave free helmets away to the winners that night – an open-face helmet with goggles. I still got it on a shelf at the bar (in his current race shop).”

Frank became the scourge of the Limited Late Model division at Stateline and its sister track, Eriez Speedway in Hammett, Pa., which his father also helped build in 1958. He won consecutive track titles at Stateline from 1983-87, a stretch that included a 19-win season in 1985 – the first year that Stateline was not owned and operated by Frank’s father and his partners. Several years after Lloyd passed, the three remaining partners (Jerry Frank, Don Frank, Briggs) sold both speedways to Francis Seamens, who operated Stateline until his death in 2010. (Seamens’s widow, Jenifer, continues to promote the speedway today.)

It was also in ’85 when Frank launched his dirt Late Model career. Again, his milestone moment came at Stateline.

“I ran Sharon (Speedway in Hartford, Ohio) with my Limited Late and (local driver) Bill Southwell asked asked me if I’d drive his Late Model the next night at Stateline,” said Frank. “Of course, people said I was gonna get a rude awakening in the Late Models, but I ran second the first night with it. Then we went to Eriez the next night, and Dave Hess Sr. – he was the man to beat at that time – was leading and I passed him with eight or 10 laps to go, but they had a yellow with two to go and black-flagged me because the epoxy fell out of the head and I was smoking.

“I remember I told Southwell, ‘That’s bull—-.’ I drove his Late Model again the next week and we won at Eriez.”

Frank went on to win dirt Late Model titles at Stateline in 1988 and ’89, but then his years as a mainstay there came to an end. He “had a disagreement with Franny (Seamens)” and started running elsewhere, broadening his racing horizons with a schedule that steadily grew to include touring series shows and the sport’s biggest events.

While Frank never returned to run a full season at Stateline, he also never drifted too far away. It’s still his hometrack – in fact, no WoO LMS regular will run an event on this year’s tour that’s as close to their shop as Stateline is to Chub’s – so every time he races there he’s the center of attention, the local boy who made good coming home to be among family and old friends.

“I used to not like coming back there because it was too overwhelming with all the people,” said Frank. “Everybody wants to stop and talk to you – and don’t get me wrong, I like that. But when you’re racing for a living, it’s hard sometimes to do that. You could never get anything done, so I would’ve rather been on the road.

“Now, it’s not so bad. You just kind of work around it. It’s good to see people you haven’t seen in a while, people you’ve know over the years.”

Frank is hoping he can give his hometown crowd something to cheer about in Saturday night’s $10,000-to-win WoO LMS 50-lapper, the track’s third World of Outlaws event alltime but first since July 2006. He’s riding a frustrating 138-race winless streak since his last WoO LMS victory on Aug. 22, 2009, at Ohio’s K-C Raceway, but he’s confident that some familiar turf and local support could provide the magic potion he needs to get back in the circuit’s spotlight.

“We’ve been to Stateline a couple times already this month so hopefully we learned something,” said Frank, whose recent weekly-show appearances were highlighted by a second-place finish on May 4. “I want to win every damn race I’m in, but it would be nice to win an Outlaw show there.”

He paused, and then added, “We’d definitely have a bunch of people in the Victory Lane picture, there’s no doubt about that.”

Saturday night’s WoO LMS program at Stateline, which is presented by Roberts Trucking and Davies & Sons, will also include racing for the track’s Crate Late Model, E-Mod and Limited Late Model divisions.

Gates will open at 3 p.m. and WoO LMS hot laps are scheduled to begin at 6:45 p.m. Ohlins Shocks Time Trials will follow at 7 p.m.

More information on Stateline Speedway is available by logging on to www.stateline-speedway.com or calling 814-688-4550.