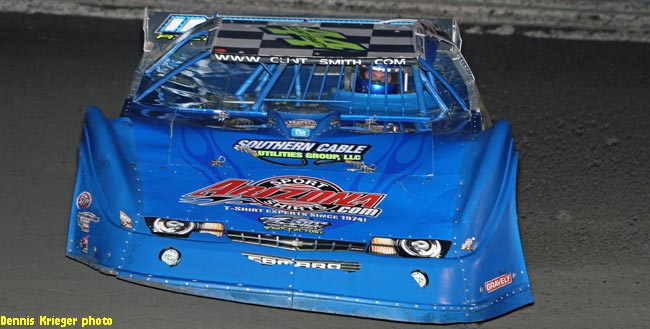 GRAND FORKS, ND – July 11, 2013 – Clint Smith has some unfinished business to tend to at River Cities Speedway when he visits the high-banked, quarter-mile oval on Friday night (July 12) with the World of Outlaws Late Model Series.

Last year Smith, 48, came within inches of a slump-busting victory at River Cities, losing to eventual tour champion Darrell Lanigan of Union, Ky., at the finish line after leading the entire distance. The defeat – by just 0.024 of a second, likely the closest finish in WoO LMS history – was a heartbreaker that Smith still remembers vividly.

“Not having any brakes was the hardest thing,” said Smith, who started last year’s A-Main from the pole position and bolted into the lead at the initial green flag. “We didn’t have any brakes from the get-go, so I had to pump ’em (at the end of) every straightaway to get in the corner. It was our mistake because we didn’t have the car maintenanced right – the night before the brakes got hot on the rubbered-up racetrack in Canada and we didn’t bleed ’em (for River Cities) – and that’s what really cost us the win.

“On the last lap I caught a lapped car and Lanigan ran in there and caught me. We just got side-by-side and racing and I didn’t think about the pump (entering turn three) that one lap. I didn’t pump ’em, so I pushed and he got me.”

Lanigan, whose 2012 victory at River Cities was his second in what would become a series-record streak of six consecutive wins, came off the inside of turn four to barely nose out Smith at the checkered flag. The dramatic turn of events denied Smith a triumph that would have snapped his WoO LMS winless streak at 47 races.

“That was a tough one,” conceded Smith, whose winless streak in World of Outlaws competition has stretched to 91 races through July 11 (last victory: May 8, 2011, at Needmore Speedway in Norman Park, Ga. “We run more laps and I think I still beat him because I’d have my rhythm back, but at that one spot where the transponders score he had me beat. I was coming back by him at the line, so another one foot later I think I would’ve been at least even on the transponders.”

Finishing the job will be on Cat Daddy’s mind when he returns to River Cities on Friday night. He’s in the midst of his roughest season ever on the WoO LMS – he currently holds the 11th spot in the points standings – but he’s been a contender for victory in several recent events and thus brings some confidence into the track’s eighth annual full-fender World of Outlaws show.

“We’re running pretty good,” said Smith, whose two strongest runs of 2013 have come in the past month (second on June 23 at Ontario’s Cornwall Motor Speedway, third on July 9 at Wyoming’s Gillette Thunder Speedway). “We blew a motor (on July 6) at Deer Creek (Speedway in Spring Valley, Minn.) and that kind of damaged us for this (western) trip, but the RaceTek 412 engine we put in the (Rocket) car is still a pretty good piece for a short track like Grand Forks.

“Grand Forks is a place we’ve usually been good at, so we have that on our side too. It’s an excellent racetrack that is known for having super racing every time we go there, so I’m looking forward to it.”

Smith, who has finished worse than 11th just once in his seven previous WoO LMS starts at River Cities, has been a WoO LMS stalwart since the circuit was restarted in 2004 under the World Racing Group banner and owns 12 career wins on the national tour. He loves being part of the traveling show, but he knows that he needs to crack Victory Lane to make it worthwhile for him to continue rolling down the highway with the series.

While Smith is enjoying life on the road this year like few others in his career – he’s been accompanied all summer by his 20-year-old daughter Jenna, who works in the WoO LMS apparel trailer at every event to earn some extra money before returning to Georgia Southern University in the fall, and Jenna’s 20-year-old boyfriend Andy Wilson, who serves as Smith’s fulltime mechanic – he has one rough fact hanging over him. If he’s unable to move up to 10th place in the points standings he’ll miss out on collecting valuable points-fund cash at the end of the season.

“I don’t know the forecast for the rest of the year, but we’re gonna do our best to finish the tour off,” said Smith, who has finished as high as third in the points standings (2007). “Definitely not being in the top 10 changes your thoughts on how much you’re gonna drag around the country because there’s no point reward at the end of the year, but it is what it is. We got in such a hole in Florida (in February) from having trouble with transmissions and motors, it’s been hard to get out of it.

“With all the heat down there in Florida at the start of the year, if you ain’t got your A-team equipment every night you’re gonna miss the show. You really have to give everything you got, but we really had nothing to get it with and that got us buried us so much in the points that we’ve never recovered.

“We haven’t really been that slow all year,” he added. “Our car’s been pretty good, but we’ve just had trouble with breakages and other drivers so far this year. We’re hoping things are turning around so we can finish out strong.”

General admission is $28 at advance ticket outlets and $30 at the track, with children 7-12 admitted for $15 and kids 6-and-under free.

Additional info on River Cities Speedway is available by logging on to www.rivercitiesspeedway.com.