BEFORE IT WAS #FALS: Fairbury’s Rich Racing History Paved the Way for Today’s Success 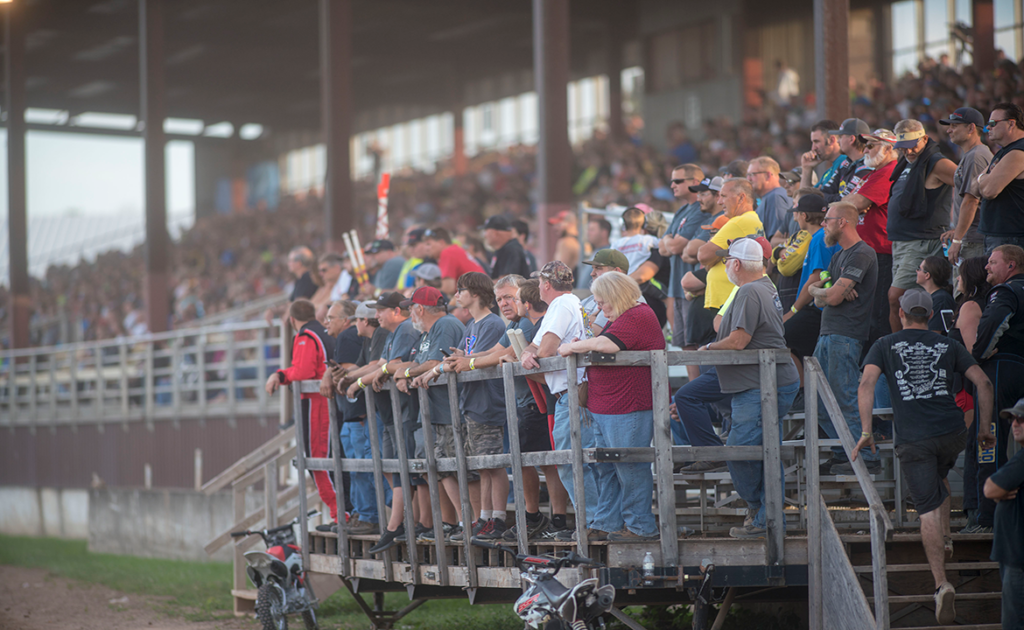 Tradition runs deep at Fairbury Speedway. Situated at the corner of 1st Street and Pine Street in a small Illinois farming community, what fans see today is rooted in more than 140 years of history.

Those charged with leading the next generation have gained the experience of those before them. Such is the case with Fairbury Speedway’s new owner, Matt Curl. A native of Fairbury, there are no bigger believers in how big a role the tiny quarter-mile dirt oval can play on the national racing scene.

For many, it will become obvious at this year’s 30th running of the Prairie Dirt Classic, featuring the World of Outlaws Morton Buildings Late Model Series. Racers from around the country will pour into the town of less than 4,000, bringing enough fans to more than double the its size.

“Being born and raised in the town of Fairbury and growing up and attending the races every Saturday night, nothing excites me more than to make sure we preserve the history of the speedway and continue the success so many people have built throughout all the generations of people involved with the Fairbury Speedway,” said Curl in a rare moment to catch his breath while making sure every aspect of the facility is ready for the next event.

Fairbury Speedway’s roots go back to 1876. As America celebrated its 100th birthday, the Fairbury Union Agriculture Board was formed in order to purchase land and start a fair for the citizens of the area. In 1903 a patch of Cyprus trees was cleared to make way for a horse track, which is still between the front stretch of the speedway and the covered grandstands that are still standing today.

After several years of horse racing, a gentleman named Newt Folton, the Fairbury Fair Secretary and local newspaper editor, had wooden planks installed on the half-mile horse track in hopes of hosting amateur auto racing in the near future. In 1917, Eddie Rickenbacker, an American Flying Ace in World War I and Medal of Honor recipient, visited the track in an attempt to break the world speed record on a motorcycle. There is no indication he was successful.

From 1922 to 1927 racing was held regularly at the track. Competitors would come from bordering states to battle it out for a top prize of $400. Adjusted for inflation that is nearly $6,000 in today’s economy. Offering a large purse and great racing surface was vital to the track’s early growth. The 1920s saw a boom in motorsports as technology began to improve with every passing day.

“Twelve cars competed for the $750 in cash prizes and they put up a fine race program. The track had been sprinkled previous to the races, but it was not long before the dust was flying and made the going somewhat precarious for the drivers. However, no accidents marred the day,” The Blade, 9/15/1922

Taking the first official checkered flag was Earl Worrick of Covington, Indiana on September 15th, 1922. The Hoosier outpaced 11 other cars that day completing the 20-mile race in just under 24 minutes and taking the trophy home in his Chevrolet.

During the depression, the track lay mostly dormant. Only three races were held between the years 1927 to 1937.

In 1938 the track was brought back to life by local auto dealer and race fan Elias Eli “Spud” Schlipf. Spud put together a committee who laid out improvements to the facility and came up with a proper marketing plan. They were able to persuade county officials that they could fill the stands, and the green light was given. Spud and his crew went to work with a long list of improvements — taking down the infield fences prepping the surface with chloride —  and managed to pull off a race in September of that year.

Racing was back at Fairbury!!!

“Everett Rice, Crawfordsville, Ind., in a Miller Special, won the feature race at the local fairgrounds track Sunday before a crowd estimated at between three-thousand and thirty-five hundred people… Much credit is also due Spud Schlipf, the manager, for the way the races were conducted,” The Blade, 9/16/1938

Finishing off the list of improvements; the East turn was widened; new pits were built, and additional seats were installed in time for the 1939 races. Spud became known across the country as a premier promoter. His team would constantly monitor local conditions to ensure that Fairbury was not only the fastest track around but also the most entertaining and fan friendly. He would go on to serve as the Fairbury race director until 1967, putting in a full 30 years at the track. It’s safe to say that without Spud and his vision there would be no racing at Fairbury Speedway today.

After a nationwide moratorium on racing during World War II, racing returned to Fairbury in 1946 on a newly built fifth-mile bowl-shaped Midget track.

“Interest in this city’s first midget auto race meet reached fever high Wednesday afternoon when the vanguard of the racing teams with their sleek, slim and powerful cars arrived at the American Legion Speedway at the Fairgrounds,” The Pantagraph, 5/23/1946

Midget racing was sweeping the nation, and the speedway reaped its share of the reward. Crowds swelled to a reported 6,500 in the mid to late ’40s. Famous drivers began to show up to compete, like Emil Andres and Tony Bettenhausen, who had both competed in the Indianapolis 500.

Midget racing became so popular in fact, new tracks were popping up all over the country. With too many tracks and not enough cars, Spud reduced the number of races at Fairbury to one each month.

“The midgets will return to Fairbury July 20 for 101 laps of racing thrills according to Spud Schlips. …there are now too many tracks for racing to be run on so frequently in one community, he said, explaining that quality, not quantity, has become the most important consideration.” The Blade, 7/1/1949

In July of 1949, the AAA sanctioned their first race outside of Chicago in Illinois at Fairbury. Attracting drivers from across the country, the race played out before a packed house.

“AAA stars from California to New York battled to the wire in the 40-lap feature event, but it was up to an old-time favorite of the Fairbury Speedway, hard driving, and never-say-die Frank Burany to lead the 12 Offys (Offenhauser) in the main event and cop the first money.” The Blade, 7/22/1949

Stock cars made their arrival in 1949. At this time tracks across the country were running races with the factory produced vehicles. It was common in those days for a competitor to drive their car to the track, put on racing tires and compete in races.

Originally running a split bill with the midgets, the stock cars gradually gained popularity, but it wasn’t always smooth sailing.

“Friday night ended the brief stock car season with a capacity crowd, which is still discussing the outcome of the feature, which was announced as No. 56, but developed into an argument when doubts were raised about the number of laps that the No. 56 had completed. The judges were arguing about the outcome long after the race was over, and Mayor Roy Taylor who was to award the trophy, went home when the judges could not reach a decision.” The Blade 9/1949

Stock cars would run at least one race at the track every year from 1949 all the way to the current day, crowning 40 different champions over the 70 years. The cars have changed quite a bit over the years. Gone are the “stock” cars, replaced with highly engineered machines touting advanced suspensions and finely tuned engines. Today’s Late Model Stock Cars barely resemble their ancient cousins, but the spirit of competition lives on.

In 1989 it became evident that improvements were needed at the aging track. While the purse had increased to one of the largest in the area, the car count had diminished. The track was too small and the corners too tight for the bigger and faster cars of the day. This led to single file racing, extreme difficulty passing, and many drivers moved on to other tracks where their odds of winning were higher. The low car count, in turn, drove attendance down. It was time to make a change.

“The Fairbury Fair board and American Legion agreed Tuesday to provide funding for renovation of the track, which was built in 1945. The dirt track will be leveled and rebuilt in time to open the 1990 season, said speedway spokesman Doug Aaron. ‘It will be a bigger and better race track,’ Aaron said. The size of the track will be enlarged, yet will still remain inside the horse track used annually at the Fairbury Fair.” Mike Murphy, The Daily Leader Sports Editor

Doug Aaron was a race fan and journalist who covered dirt racing in Illinois, reporting for The Pantagraph and The Daily Leader. His experience traveling to 50-plus races a year gave him concepts on what could be done to improve car count and attendance at Fairbury. He put his track design on paper and talked to the drivers. After some feedback a final blueprint was established, and the work began.

Thanks in a large part to good weather, an army of local and regional contractors set about making the improvements to the historical facility. The race track was completely leveled using heavy equipment. The new track surface was laid out with the help of lasers and 20,000 tons of dirt that had been trucked in.

The new surface measured 1/3 mile in length with 60-foot wide straightaways and sweeping 75-foot side corners with 25-degree banking. A $25,000 state-of-the-art MUSCO Sports Lighting System was also installed, illuminating the track like it had never been seen before. The project cost $500,000 and was well received by all involved.

In the winter of 1990 Fair Board and American Legion leaders, wanting to showcase the improvements to the then 70-year-old track, decided to host two annual events in hopes of attracting the country’s best drivers. The UMP Gold Series was renamed to the Summer Nationals, and a new feature late model race was born. The Prairie Dirt Classic (PDC).

The first PDC was run on September 5, 1990, when Snooky Dehm took home the top prize. After taking the lead at lap 5, he held it for 47 laps until Tom Pauley made a high side pass. Pauley’s engine would explode on the next lap, giving the lead back to Dehm who went on to take the checkered flag.

The event has become a huge success. Today known as one of the country’s premier dirt Late Model races, the PDC is a stop on the World of Outlaws Morton Buildings Late Model schedule. Touting a $93,000 purse and $30,000 to win, the PDC attracts close to 70 of the country’s top late models each year.