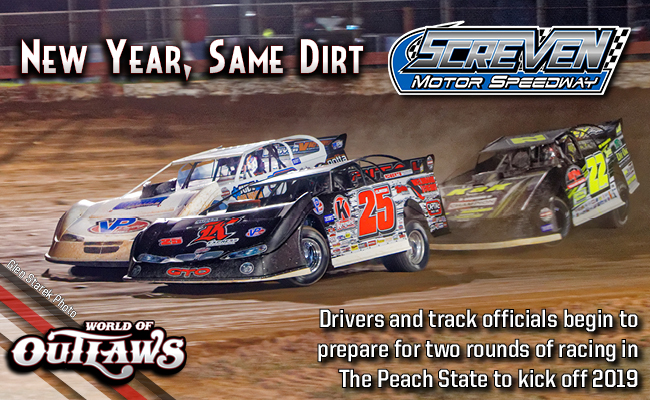 SYLVANIA, GA — Jan. 8, 2019 — The 2019 World of Outlaws Late Model Series championship battle kicks off in exactly one month at Screven Motor Speedway, setting the stage for what promises to be a thrilling season of full-throttle racing from Florida to North Dakota and practically everywhere in between.

February 8-9 marks Winter Freeze IX and the fifth consecutive and 10th overall year for the Outlaws to return to the 3/8-mile red clay oval, in the 18th season of Series competition.

While the newcomers to the Series will be looking to stake a claim to their place in Outlaw lore, the veteran racers have had much success at Screven. Shane Clanton, the 2015 Series champion, has the most Outlaw wins at the track with three, but the last Outlaw winner at Screven was Chris Madden, who begins the 2019 season as a teammate of Clanton’s.

As always, the team at Screven is gearing up to have the Outlaws back as part of the ninth edition of their annual Winter Freeze event, which serves as the Outlaws season opener for the fifth year in a row.

“We’re always excited about having the World of Outlaws here,” said Screven Race Director Kelley Carlton, who noted free camping in a designated area adjacent to the speedway and a full menu of fresh-cooked, non-traditional racetrack food available inside the facility. “This is our premiere event, a lot of money and prestige on the line. This event can either make or break a driver’s Speedweeks, so we try to have the track surface in excellent racing condition.”

Chase Junghans, a full-time Outlaw looking for a breakout season, is hoping two years of racing experience around the country and in the southeast has helped him stockpile some knowledge for his return to Screven next month.

“After doing this for so many years now, I kind of know what to expect,” said Junghans, who hails from Manhattan, KS. “Hopefully, we can just be better prepared and have a better game plan at some places I struggled. At the places I ran good last year, I got a notebook so we can go back to that if there’s anything we can use from last year to this year. That’s our plan.”

In addition to the Outlaw regulars, a sizable field of competitors from throughout the region is also expected to compete, including the likes of “Rambo” Dennis Franklin, Ray Cook, Cla Knight, Michael Brown, Ivedent Lloyd Jr., Brent Dixon and Brian Connor, to name a few.

Things will get under way at the track on Thursday night, Feb. 7, with an open practice session for all divisions. The following evening kicks off with the gates opening at 2 p.m. and drivers meeting at 6 p.m., with racing to follow. On Saturday, gates will open at 10 a.m., drivers meetings at 5:15. Tickets for any day of the event can be purchased at the gate; for more information, click here. Kids 12 and under are free on all three nights.

Winter Freeze IX will be part of a nine-day stretch for the Outlaws down south, as the Series then heads to Volusia Speedway Park to race four times in four nights at the 48th Annual DIRTcar Nationals, Feb. 13-16. Two DIRTcar Late Model races will precede the Outlaw invasion, Feb. 11-12. Single and multi-day ticket packages are on sale now; click here to learn more.

Live Online Updates
Watch every race live in 2019! Head to DIRTVision.com to get your World of Outlaws Late Model Fast Pass and see every lap of every race this season, anywhere you are!