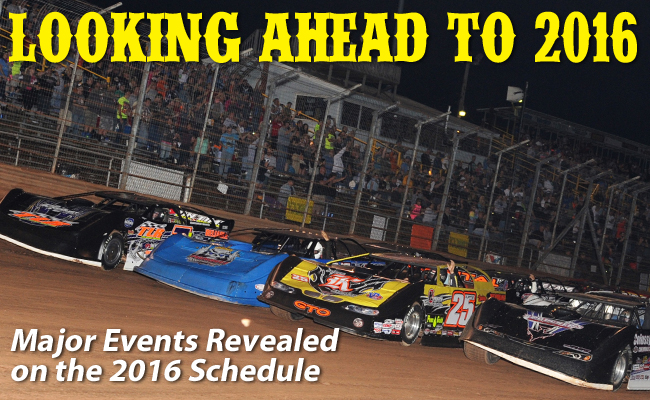 CONCORD, N.C. – Sept. 5, 2015 – The 2015 World of Outlaws Late Model Series championship battle is headed toward a showdown at the Bad Boy Buggies World Finals in November at The Dirt Track at Charlotte Motor Speedway, but series officials are already looking ahead to 2016.

Nine major destination events are on the slate for 2016 so far, giving nearly each month during the season a huge event for fans to plan around. The tour will kick off the season on Friday and Saturday, Feb. 12-13, at Screven Motor Speedway in Sylvania, Ga., invade Bubba Raceway Park on Sunday, Feb. 14, in Ocala, Fla., and close out the month Feb. 18-19-20 during the DIRTcar Nationals at Volusia Speedway Park in Barberville, Fla.

The first of two Outlaw weekends in Illinois will be the return of the Illini 100 on Saturday and Sunday, April 1-2, at Farmer City (Ill.) Raceway. Fans will be able to renew their seats to the event beginning Tuesday, Sept. 8, through Friday, Oct. 2. Tickets will then go on sale Monday, Oct. 5, for the big early season event.

In May, the World of Outlaws Late Models will return Saturday and Sunday, May 28-29, to The Bullring at Tyler County Speedway for the Fifth Annual Jackpot 100 in Middlebourne, W.Va.

June is highlighted by the 10th Annual Firecracker 100 weekend, June 23-24-25, at Lernerville Speedway in Sarver, Pa., followed the next month by the incredible atmosphere of the Prairie Dirt Classic on Friday and Saturday, July 29-30, at Fairbury American Legion Speedway in Fairbury, Ill.

The USA Nationals on Aug. 4-5-6 at Cedar Lake Speedway in New Richmond, Wis., will begin to set the stage for the championship battle in the fall that will conclude with the Bad Boy Buggies World Finals on Oct. 27-28-29 at The Dirt Track at Charlotte in Concord, N.C., moving a week earlier than in past years.

“We know our fans have busy schedules and like to have as much time as possible to plan around attending World of Outlaws Late Model Series events,” series director Tim Christman said. “We hope by letting everybody know now some of the big weekend events in 2016 they can make plans to join us next year.”