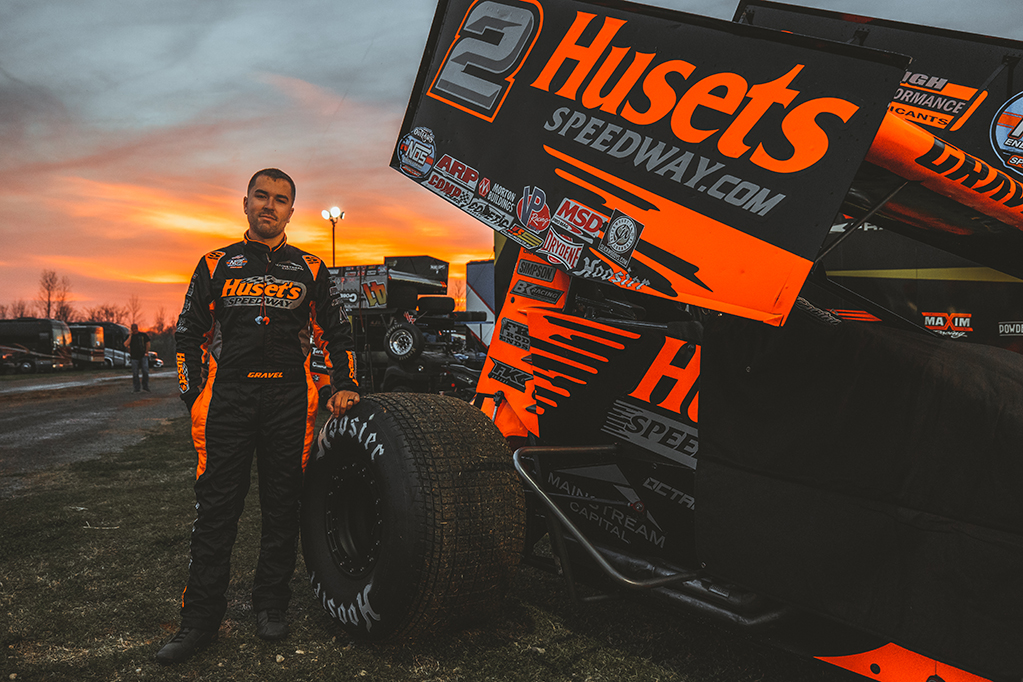 Look no further than his newest gig at Big Game Motorsports for proof of that. After two highly-successful seasons driving the Jason Johnson Racing #41, the Watertown, CT native decided to join owner Tod Quiring and the #2 headed by crew chief Cody Jacobs heading into the 2021 season.

With 61 career World of Outlaws NOS Energy Drink Sprint Car Series victories, there isn’t much Gravel has yet to accomplish. He’s a Knoxville Nationals champion and a National Open winner, but one specific bucket list item has eluded him: a championship.

The 28-year-old pilot finished third in the standings in four consecutive seasons from 2016-19. He was only 82 points away from the title in 2019, and the case could be made that he would’ve been a legitimate threat to steal it from Brad Sweet in 2020 if he competed in all 54 races.

Gravel’s goal at Big Game is simple. He believes they can win championships – plural.

“We’re trying to build something for years,” Gravel spoke on the dynamic at Big Game Motorsports.

Through the first 24 of 83 scheduled races this year, Gravel and the Big Game #2 sit second in the championship chase behind Sweet and his Kasey Kahne Racing #49. The gap is only 68 points; a gap he’ll try to close as the Series returns to Ohio this weekend for Attica Raceway Park on Friday and Sharon Speedway on Saturday. Fans can BUY TICKETS HERE.

A three-time winner with “The Greatest Show on Dirt” in 2021, Gravel’s first victory lane trip aboard the Big Game #2 came at The Rev in Monroe, LA when he outran his championship competitor Sweet in an electrifying event. A historic weekend sweep worth $35,000 at Bristol Motor Speedway followed that in April.

“I’d say our first little stint as a new team together has gone really well,” Gravel said on their season thus far. “Three wins is pretty solid. It’s one of those things where you can always be better, but you can always be worse too. I’d say it’s a good start, something we can build on for sure.”

His 61 career victories is impressive enough, but let’s not forget the fact that he’s done it with seven different car owners. Before his current spot at the Big Game #2, Gravel was winning with the JJR #41, the CJB #5, the Roth #83, the Tiner #83SA, the Rose #6, and his family-owned #89G.

Combine that ability to adapt to any situation along with his incredible qualifying prowess – 75 QuickTimes in last decade, most of all drivers – and you’ll get a driver that’s not only comfortable, but confident in any car he wheels.

“One thing I think that has helped with transitioning to different teams is the fact that we ran basically the same schedules for so many years,” Gravel mentioned. “You develop a good understanding of what the car needs and when and where to make those changes. Being a good qualifier definitely helps too. It’s not all that great all the time, you always have to work with your guys and get better.”

One of the favorite parts of the season for drivers and fans alike is the “Summer of Money.” From June to September, the schedule is lined with big paydays after big paydays across the country.

For Gravel, it’s a summer full of opportunities to grow his bank account, and gain valuable points. He’ll look to be on top of his game when Huset’s and Jackson rolls around, especially with a $100,000 bonus available to the driver that sweeps THE SHOWDOWN, which is promoted by his owner Tod Quiring.

“I’m pumped we get to kick everything off with a big week at Huset’s and Jackson,” Gravel said looking ahead at the schedule. “I’m anxious to get back to Eldora and get a couple more shots there. I really want to redeem myself at Williams Grove, too. We can qualify well and that will be big to get ourselves in the Dash. We’re working every where to get better for this summer.”

Before the swing of summer begins, Gravel first has to tackle Attica Raceway Park tomorrow on Friday, May 21 and then Sharon Speedway on Saturday, May 22. Fans can BUY TICKETS HERE.