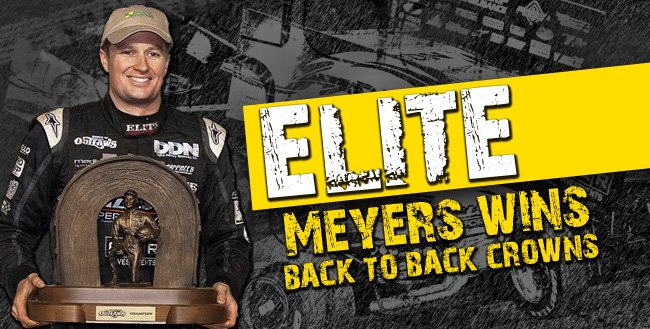 CONCORD, N.C — November 14, 2011 — What a difference a year can make. The 2010 World of Outlaws Sprint Car Series title race would go down as one of the most exciting in history as four drivers entered in season ending Lowes Foods World Finals presented by Tom’s Snacks, Coca-Cola and Natures Own with a four drivers having a mathematical shot at the title. In 2011, however, Jason Meyers didn’t want to leave near as much to chance. When the series rolled into the Dirt Track at Charlotte last November, Meyers held a 96 point advantage over four-time and defending series champion Donny Schatz. Meyers captured the title in dramatic fashion by sweeping the final two races of the season. Flash forward one year and the driver of the #14 DDNi/Media-Tile/GLR Investments/All-Star Performance KPC was atop the series points standings once again but by over 240 markers this year. After riding the strength of one of the most impressive winning streaks in recent World of Outlaws Sprint Car Series history, Meyers solidified his position in the series history books by becoming only the fifth driver to win multiple titles.

In a season that saw Schatz capture his fifth Goodyear Knoxville Nationals crown, Tyler Walker capitalize on Sammy Swindells heartbreak at the Kings Royal and many more memorable moments, Meyers and his Elite Racing team quietly put together one of the strongest seasons in recent memory. With five bonus points going to the fastest qualifier at each race, Meyers used Charlie Garrett horsepower record twelve Quick Time’s on the season. The Clovis, Calif. native also led the series in top-5 and top-10 finishes. In the month of July alone, Meyers finished 14 of 17 races in the top-5.

While Meyers didn’t catch fire until the summer months, Steve Kinser looked to be the man to beat after the series opened the season at the 40th Annual DIRTcar Nationals by UNOH. The 20-time series champion served notice to the rest of the field by claiming back to back victories. Throughout the entire season, the #11 Bass Pro Shops/J.D. Byrider/Chevrolet ran near the front and continued to prove that Kinser was among the best of the best behind the wheel of a sprint car.

Kinser’s Tony Stewart Racing teammate, Donny Schatz, continued his climb towards the ranks of Sprint Car immorality in 2011. Schatz captured the annual Brad Doty Classic in July to move into the fourth spot on the series all-time win’s list, one spot ahead of his childhood idol, Doug Wolfgang. When August rolled around, Schatz was fierce as ever, leading 35 of the 50 laps to claim his 5th win in sprint car racing’s crown jewel event, the Goodyear Knoxville Nationals. Schatz also went on to sweep the season ending Lowes Foods World Finals presented by Tom’s Snacks, Coca-Cola and Nature’s Own at the Dirt Track at Charlotte.

Kasey Kahne Racing continued to enjoy success at sprint car racing’s top level as all three machines visited victory lane in 2011. Brownsburg, Ind. native Joey Saldana appeared to be the early favorite for the title as he led the series standings throughout the spring and into the summer months. Sadly, Saldana’s hopes for a first career World of Outlaws Sprint Car Series title ended with a vicious crash at the Kings Royal. Saldana would be sidelined with multiple injuries for nine weeks but returned with a vengeance as he won his first two races back, including an emotional return to Eldora Speedway, the site of his accident.

Saldana’s teammates also enjoyed success on the season. Paul McMahan put his #83 HR Cattle/Roth Motorsports Maxim in victory lane four times on the season including the Outlaws Showdown at the Dirt Track at Charlotte in May and the series return to the Belleville Highbanks in early June. McMahan also picked up ten Quick Time honors on the season. Youngster Cody Darrah drove his #91 Great Clips Maxim to victory at Castrol Raceway in late August and claimed the annual Oil City Cup by virtue of having the highest average finishing position over the two races.

Craig Dollansky ended 2011 with nine victories on the season. The Elk River, Minn. native notched wins in the grueling Ironman 55 at I-55 Raceway, the Mini Gold Cup at Silver Dollar Speedway and swept the Duel in the Dakota’s at River Cities Speedway. Dollansky was never too far from the front as he finshed fourth on the total laps led chart with 218 and was presented with the overall KSE Hardcharger award for passing the most cars in 2011.

Coming out of the 40th Annual DIRTcar Nationals presented by UNOH, Jason Sides was red hot. The Bartlett, Tenn. native scored his first win of the season in only the third race and kept the strong momentum going into the early summer months. Sides notched three more wins until a mid-summer slump slowed his #7s Wetherington Tractor Service Maxim. “Double Down” rebounded on the Outlaws second West Coast Tour as he finished second in the prestigious Gold Cup Race of Champions at Silver Dollar Speedway.

Kraig Kinser wheeled the #6 Caseys General Stores Maxim to victory at Cottage Grove Speedway on Labor Day. With his victory, the Bloomington, Ind. native gave car owner Lonnie Parsons his second win in a row at the quarter mile bull ring. In addition to the win, Kinser opened the season strong with a top-5 showing on the second night of the 41st DIRTcar Nationals presented by UNOH.

Chad Kemenah and Lucas Wolfe both contended for victories throughout the season. Kemenah was strong early on with a fourth place finish at Royal Purple Race and showed surprising strength at Williams Grove Speedway all season long. Wolfe continued to inch ever closer to his first career series win. The Mechanicsburg, Pa. native led the first 24 laps of the Outlaws debut at the Salina Highbanks Speedway only to lose a tire near the end of the race. Wolfe also flexed some muscle at the beginning of August when he finished in the top-5 four consecutive races.

Bill Rose played the role of veteran rookie in 2011. Despite driving a transporter with more than a million miles and using old tires on his race car, Rose kept up with the Outlaws nearly every where they went. The Plainfield, Ind. native scored his best finish of the season, third, at River Cities Speedway. Upon climbing from his #6R KJM Trucking Maxim, he was given a standing ovation by the sold out crowd.

With the 2011 season in the books after the Lowes Foods World Finals presented by Tom’s Snacks, Coca Cola and Natures Own at the Dirt Track at Charlotte, each driver and team will turn their attention to the 41st Annual UNOH DIRTcar Nationals at Volusia Speedway Park.