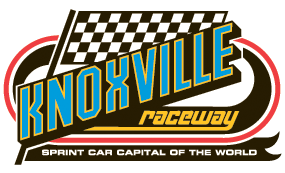 Event Description
It's Knoxville's finest vs. the World of Outlaws in this doubleheader at The Sprint Car Capital of the World.

Fifty-nine times Brian Brown has now triumphed in a 410 Sprint Car at Knoxville Raceway. But this one might be his most special in a long time.

“That’s Knoxville,” Brown said with assertion in Victory Lane. “Chalk that one up on the board for Knoxville.”

Brown’s jubilation in Victory Lane as he emerged from his car victorious in the Brownells Big Guns Bash and the weight of this win can best be illustrated with a few stats: his sixth career World of Outlaws NOS Energy Drink Sprint Car Series Feature win, first in Outlaws action since June 14, 2019 – ending a 90-race drought with The Greatest Show on Dirt.

But one accolade he earned Saturday night that stands out above the rest has to do with one man that helped get him into the winner’s circle – Sprint Car Hall-of-Famer Danny Lasoski.

Lasoski, the 2001 World of Outlaws champion, has 122 victories with the Series in his career, and now has one as a crew chief to match.

“My whole career, I’ve been a really, really big fan of Brian Brown’s,” Lasoski said. “I helped him get his start with my dad, and there’s nothing that makes me more proud to be a part of this team with Casey’s, FVP and all these partners here that make this happen.”

“Danny has been great since he’s come on board,” Brown, of Higginsville, MO, said. “But, me and Danny are just a small piece of this whole puzzle.”

Together, they figured out the right combination to beat one of the most stacked fields of 410 Sprint Cars assembled anywhere in the country so far this year. Forty-seven cars came back to the Marion County Fairgrounds Saturday night, and Brown topped them all, much to the pleasure of his fans and dismay of his doubters.

To pull off the win, Brown had to knock-off one of the Outlaws’ very best – the three-time and defending Series champion Brad Sweet. He and his NAPA Auto Parts #49 led the opening 14 circuits around the historic half-mile before Brown got a big run on him, using the high side of Turns 3-4. They crossed the stripe and bolted into Turn 1, where Brown decided to pull the trigger.

“You kinda build a sixth sense about where guys are,” Sweet said when asked if he was surprised by Brown’s close presence. “I knew I wasn’t getting off the corners like I needed to, so you just knew he was going to have a run.”

A big slide job through the wide, sweeping corner sent the local crowd into a frenzy as they watched their favorite begin to pull away down the backstretch. According to Brown, it wasn’t the first time the Knoxville faithful had seen the maneuver this year.

“That move that I [used to] get by Brad there – I used that a couple weeks ago,” Brown said. “It pays to run here and run with [the Outlaws].”

A red flag brought the action to a halt with seven laps to go, which restacked the field and erased Brown’s lead. On the restart, Sweet tried to get back by Brown in the low groove, but Brown was too fast on the top. He led the remaining seven laps, unchallenged after that point, and collected $10,000 for his 59th career victory at Knoxville, tying him for third-most all-time with seven-time track champion Terry McCarl.

Sweet held off a hungry Spencer Bayston in the closing laps to bag his 10th podium of the season – the most by any driver. Though he came up one spot short of his second win of the season, he recognized where he could have been better for the next time he’ll be here in August for the 61st running of the NOS Energy Drink Knoxville Nationals.

“The line I wanted to run, I felt like I needed to move off of it sooner,” Sweet said. “I think the top got a little faster. I knew Brian was gonna be really fast on the top of the racetrack, so I’m a little disappointed in maybe a couple of the decisions I made as a driver.

“Any time you come to Knoxville, you’re thinking about the Nationals, so to leave here in June with a really nice balance is definitely a plus.”

Bayston crossed the stripe in third, bagging his third podium of the season behind the wheel of the CJB Motorsports #5. Ten-time Series champion Donny Schatz came home in fourth after starting 10th, while Jason Johnson Racing pilot Carson Macedo rounded out the top-five.

The Outlaws will get a few days off before getting back into action next Friday-Saturday night, June 17-18, at Beaver Dam Raceway in Beaver Dam, WI. If you can’t be at the track, DIRTVision has you covered with a FAST PASS subscription to watch The Greatest Show on Dirt. 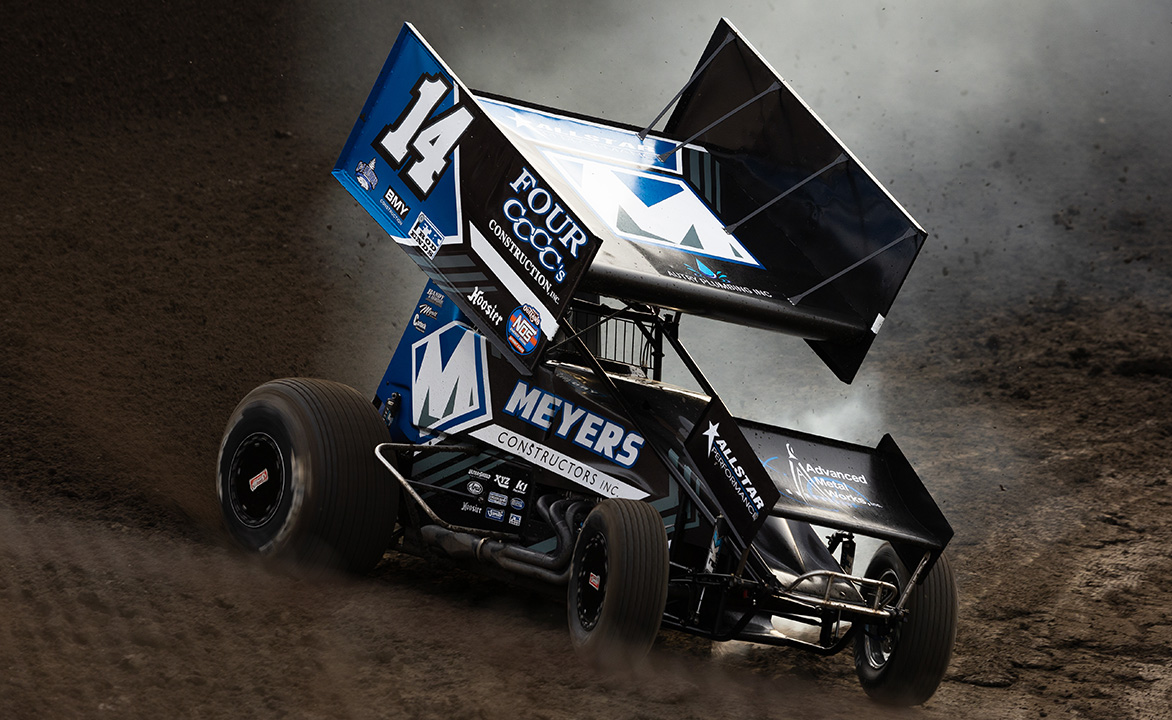 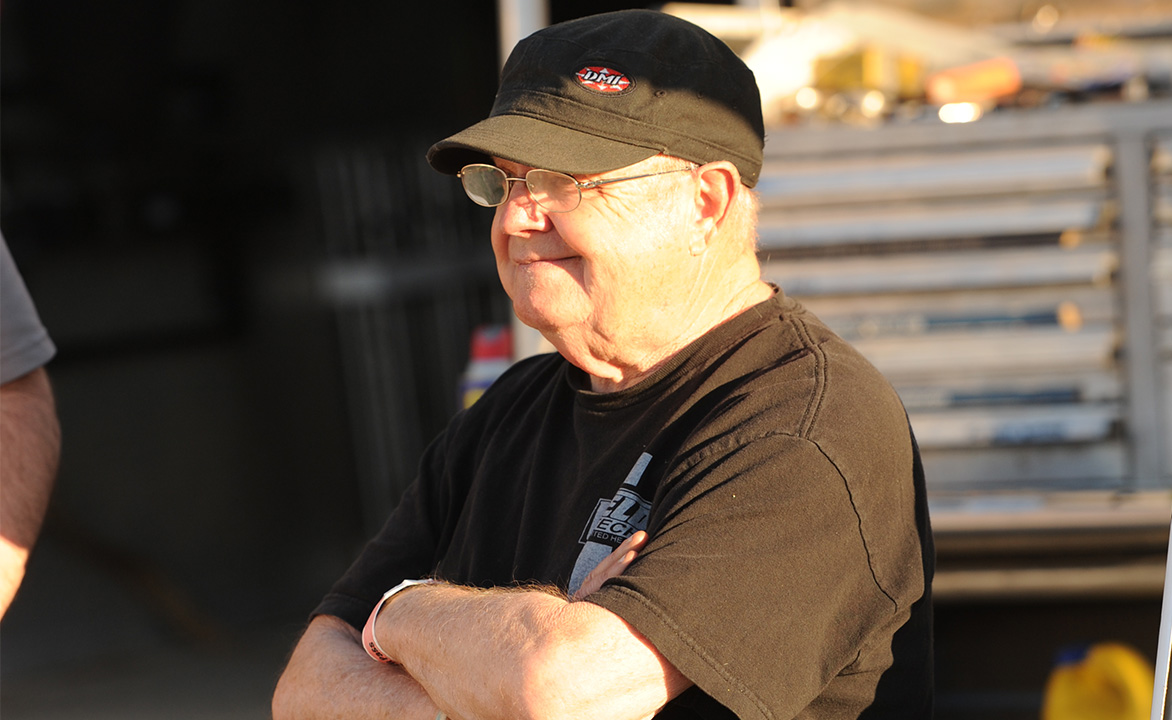 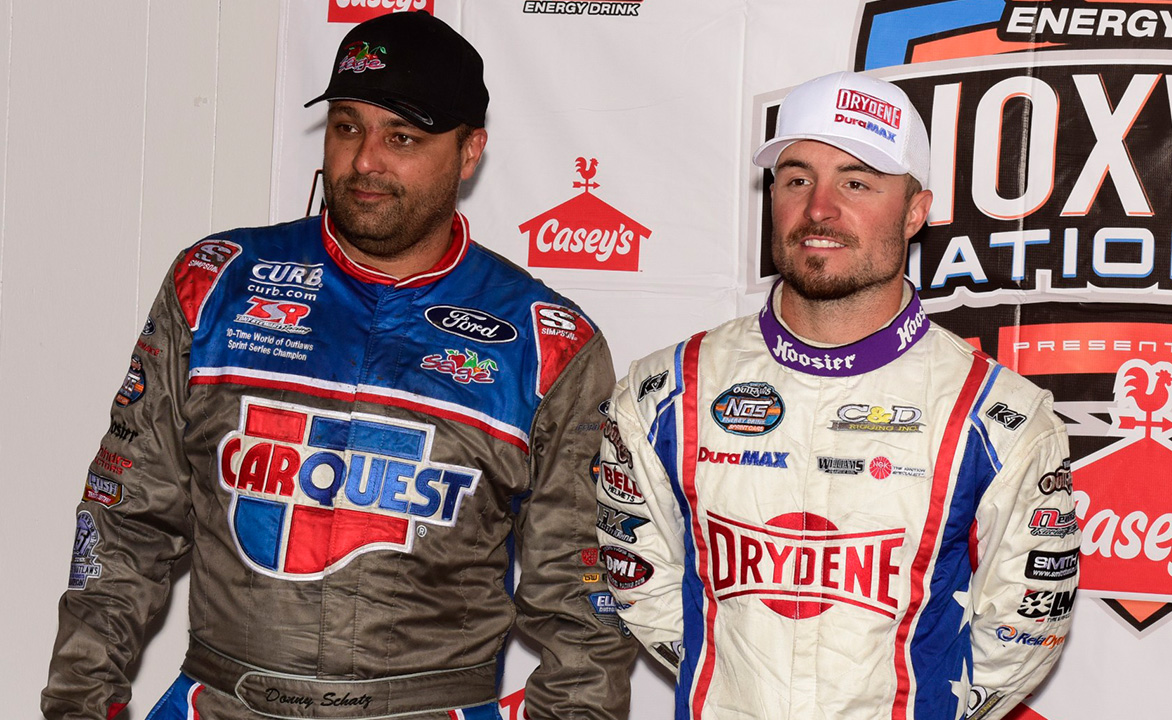 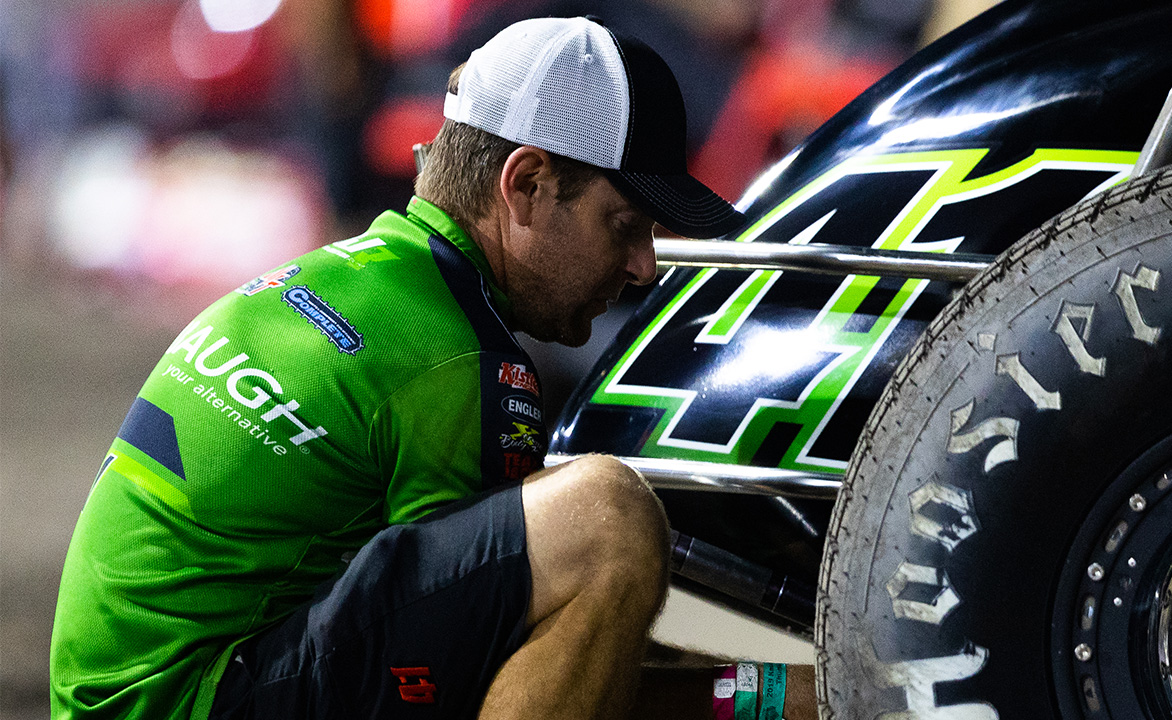 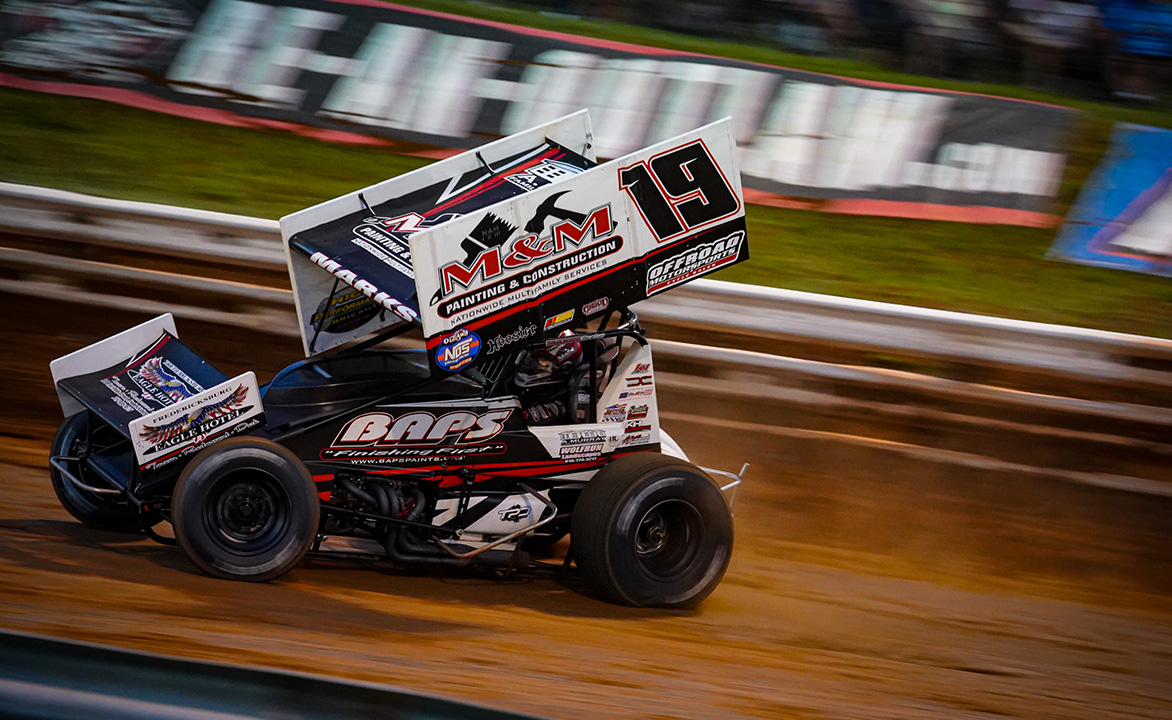 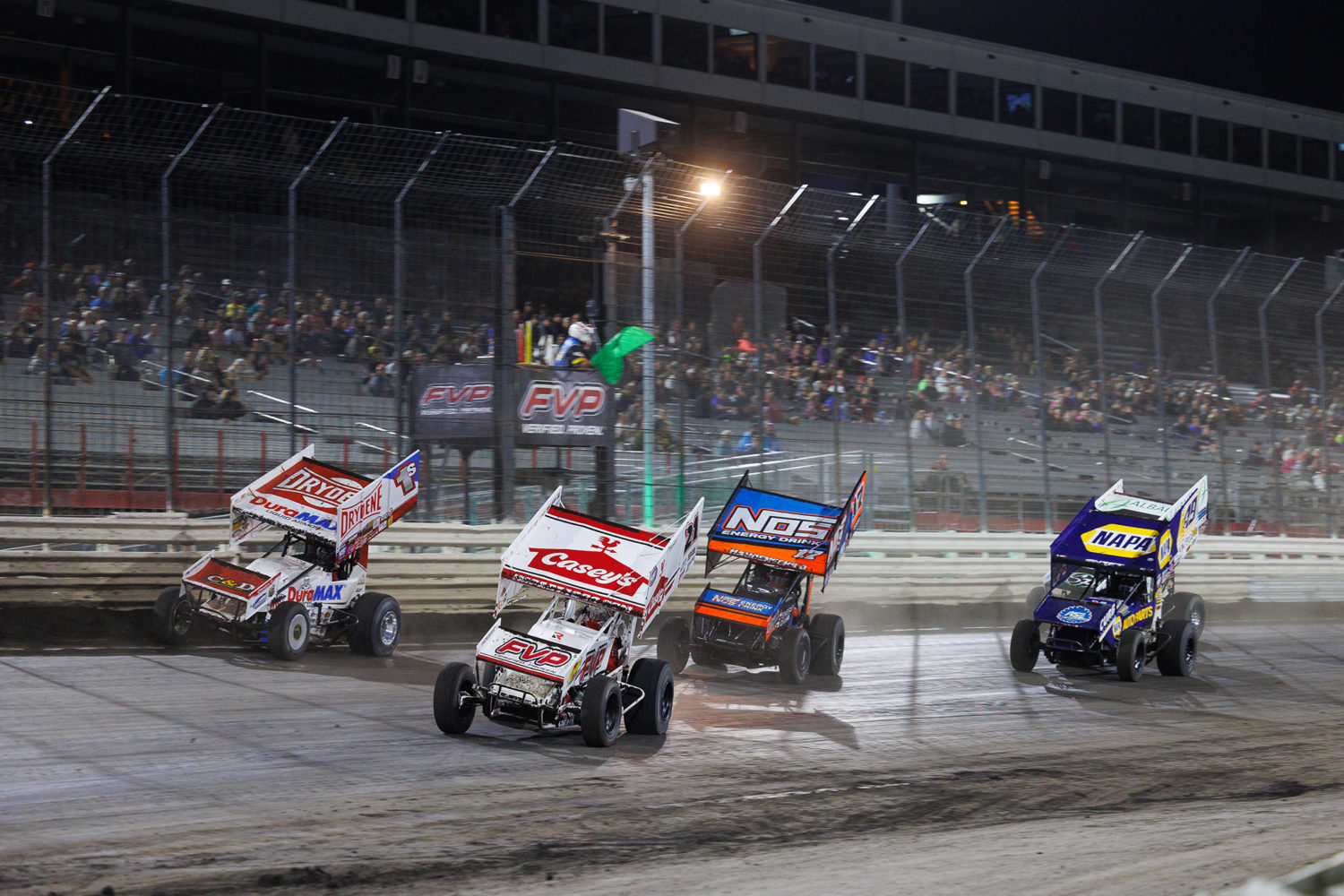 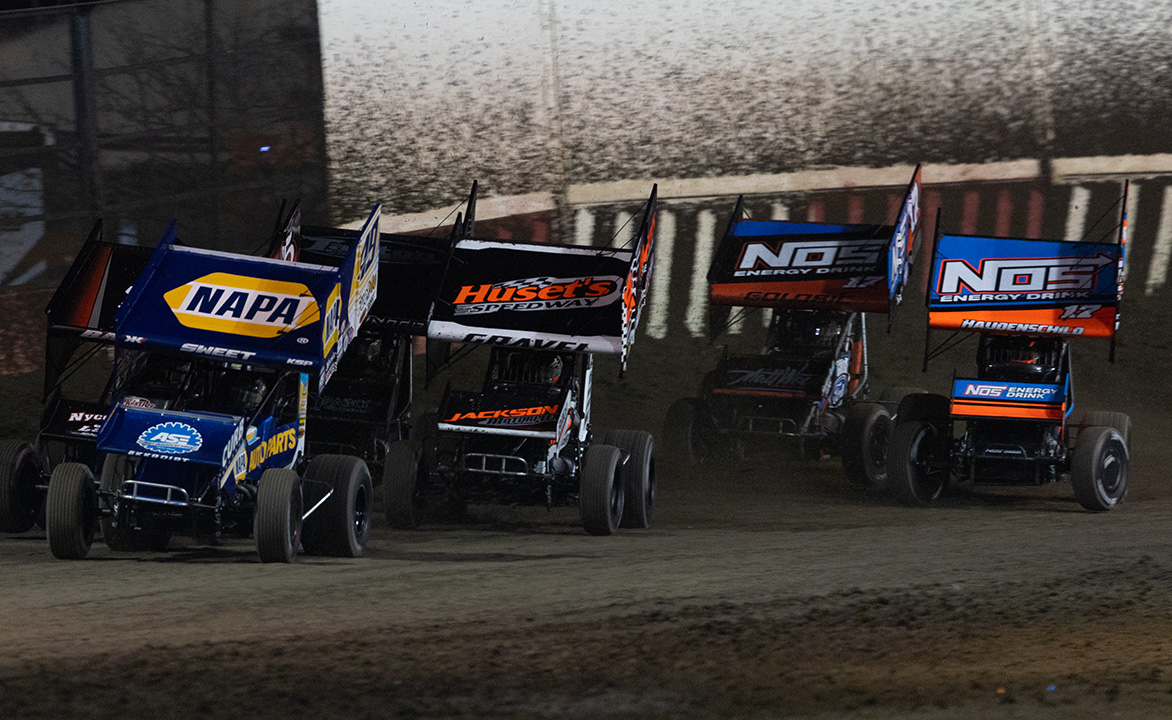