Event Description
Before the fireworks on July 4th, watch the fireworks fly at Cedar Lake Speedway for an epic doubleheader event with "The Greatest Show on Dirt."

Handicapped Parking
Outside the front gate

Personal Coolers
Coolers are permitted at the speedway, however you are NOT ALLOWED to bring in any alcoholic beverages or glass containers.

Alcohol Sales
Beer and wine will be available to purchase

Camping Cost
$60 for the Weekend

It was five years ago this month when Brock Zearfoss scored one for the PA Posse at the 2017 Summer Nationals, recording his first-career World of Outlaws NOS Energy Drink Sprint Car Series win at one of his home tracks, Williams Grove Speedway.

Since then, 1,807 days had passed and 169 races had come and gone with zero wins against The Greatest Show on Dirt. On Saturday night, that streak was finally snapped. The Moose’s LZ Bar & Grill #3Z made a triumphant visit to Victory Lane at Wisconsin’s Cedar Lake Speedway, beating reigning champ Brad Sweet and earning one of the sweetest wins of his career.

It’s no secret that the process has been grueling for the Jonestown, PA native since joining the Series full-time in 2021. There were nights when Zearfoss wanted to throw in the towel and head back home, but when you love it this much, he knew deep down that was never an option.

Ask any established superstar on the World of Outlaws trail – Donny Schatz, Brad Sweet, David Gravel, etc. – winning vs. the greatest Sprint Car drivers on the planet isn’t some overnight transition. They’ve all gone through those character-building moments of getting kicked in the dirt and losing night-in and night-out before the wins come consistently. But they all stuck with it and it paid off, a sensational joy that Zearfoss experienced himself on Saturday night.

Don’t be mistaken, either, this was no right time, right place, fluke-ish victory by The Jonestown Jet. The 31-year-old sophomore runner went wheel-to-wheel with Brad Sweet’s Kasey Kahne Racing, NAPA Auto Parts #49 on a racey 3/8-mile surface, and straight up outran the three-time and defending World of Outlaws champion.

“I’m speechless,” an emotional Zearfoss said in Victory Lane. “Nobody really knows how hard this team has worked. They’ve never given up on me, even on the nights that I think they should’ve. It’s not easy out here at all. I’ve been in this sport a long time, but racing at all these new tracks with this Series is so damn challenging. You get your butt kicked every single night against the Outlaws. This shows how far our team has come. We’ve been getting a lot better, and I hope this is only the start.

“I’ve told myself plenty of times that I should be coming off the road and that I can’t do this anymore, but deep in my heart I know this is where I need to be. We’ve all worked so hard to get to this level, we belong here and I want to prove that. It’s been a long time coming for sure. This is amazing.”

Offering three different leaders for the sixth consecutive race, the fourth-starting Zearfoss never assumed command until after halfway when a chaotic caution stripped second-running Giovanni Scelzi, third-running David Gravel, and fourth-running Logan Schuchart of position all at once.

The Lap 19 restart proved to be the ultimate game changer as Zearfoss fired off next to Sweet and executed a pitch-perfect run into turn one to steal the lead away. Sweet gave it all he had over the final 16 laps and found his way to Zearfoss’ rear bumper on several occasions, but a timely caution halted his shot at the #3Z each time.

“I knew I needed to nail that restart,” Zearfoss said on battling Sweet. “I knew my car was great in clean air, but I figured Brad would be the man to beat if I had to get too deep into lap traffic. I just needed to be consistent, but let me tell you that’s not east with the #49 breathing down your neck.”

Stretching out a 3.182-second margin of victory at the line, Zearfoss rode off into the sunset as a last-lap blunder by Sweet allowed David Gravel to complete a miraculous effort in his Big Game Motorsports #2. The Watertown, CT native went to the work area with a flat right rear tire on Lap 19, then drove from 16th-to-sixth in a quick six laps, and finished his charge with a stellar late-race rally to run it up to P2.

“I just can’t win a race here lately,” Gravel noted after his seventh runner-up result at Cedar Lake. “We didn’t give up, though, and I knew it would be a fight when my guys got the new tire on and sent me back out. We’ve been struggling a bit in the A-Main, but that changed tonight. I have to say congratulations to Brock. It can be depressing out here getting your butt kicked every night, but moments like that for him are why you work so hard.”

Current championship leader Brad Sweet of Grass Valley, CA continued his otherworldly career at Cedar Lake with an 11th podium finish in his last 12 starts at the track. As disaster struck other title contenders, The Big Cat enjoyed a big night in the points and pulled away to +38 margin through 34/77 events.

“I made a huge mistake choosing the top on that restart,” Sweet said afterward. “It’s funny because I complained last night when Donny [Schatz] was in the same situation, and I did it the same way tonight. Once I lost the lead we just never got back to lap traffic and I needed that. We’ll turn our focus to these big money races coming up next.”

The Shark Racing duo of Logan Schuchart (fourth) and Jacob Allen (fifth) rounded out the top-five at Cedar Lake Speedway, the only track where both the #1A and #1S have scored World of Outlaws wins.

Sheldon Haudenschild survived a late-race rush to the work area with a ninth-place effort in the Stenhouse Jr. / Marshall Racing, NOS Energy Drink #17. Closing out the top-10 and claiming KSE Hard Charger honors was Kraig Kinser with a 20th-to-1oth bid in his #11K machine.

A win for Zearfoss brings the count to 14 different winners through 34 World of Outlaws Features this season. The exciting battles continued as Saturday made it six-straight races with a trio of different leaders at the front of the field.

Some sort of trouble hampered second, third, fourth, and fifth in the championship points as Sweet enjoyed a peaceful night battling for the win and extending his lead. Carson Macedo flipped down the backstretch and failed to finish the race in 22nd, while Haudenschild, Gravel & Schuchart all visited the work area but rallied for top-10 efforts.

Giovanni Scelzi won the DIRTVision Fast Pass Dash and led the opening six laps of the Feature, but cut a tire and went into the fence while running second on Lap 19 of the 35-lapper.

UP NEXT (Fri-Sat) – The Greatest Show on Dirt now heads to 34 Raceway in West Burlington, IA on Friday, July 8 and Wilmot Raceway in Wilmot, WI on Saturday, July 9. Fans can BUY TICKETS HERE, or watch every lap LIVE on DIRTVision. 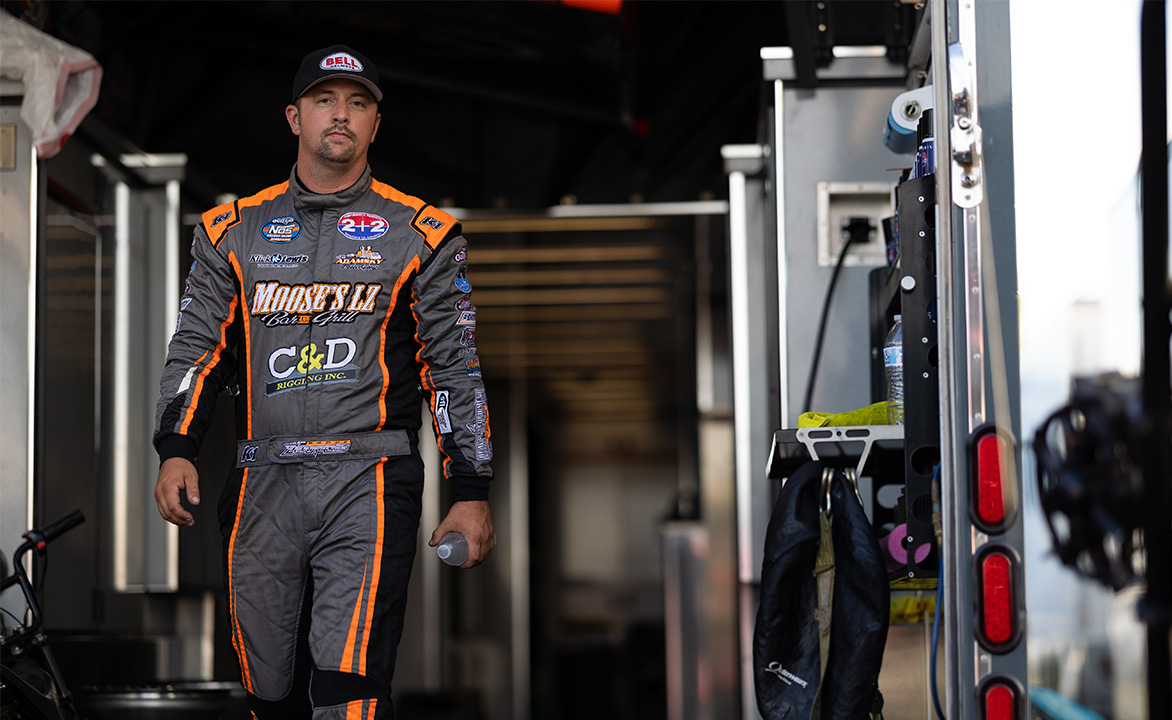 FINDING THE WAY: Zearfoss pushes through self-doubts for latest win 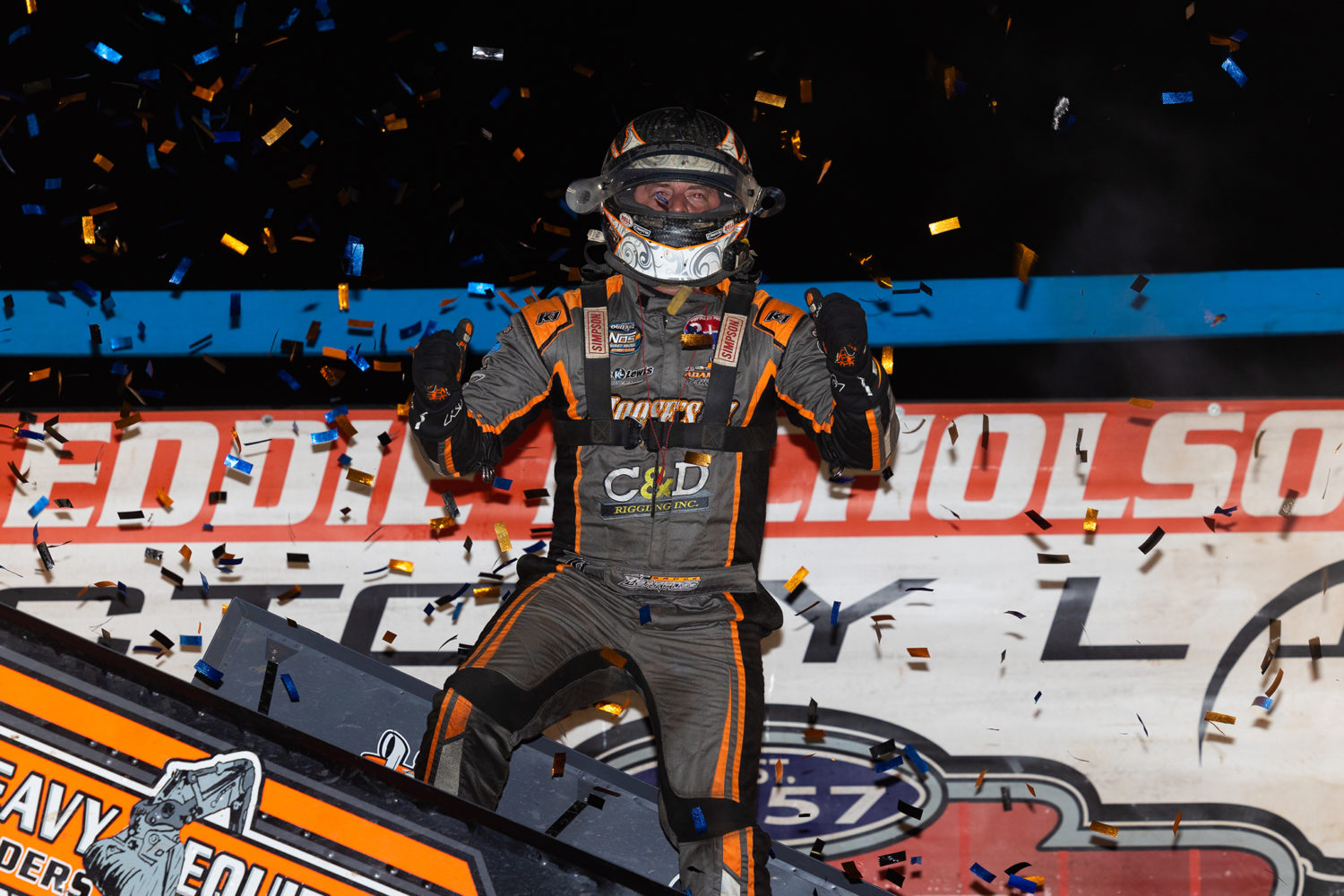 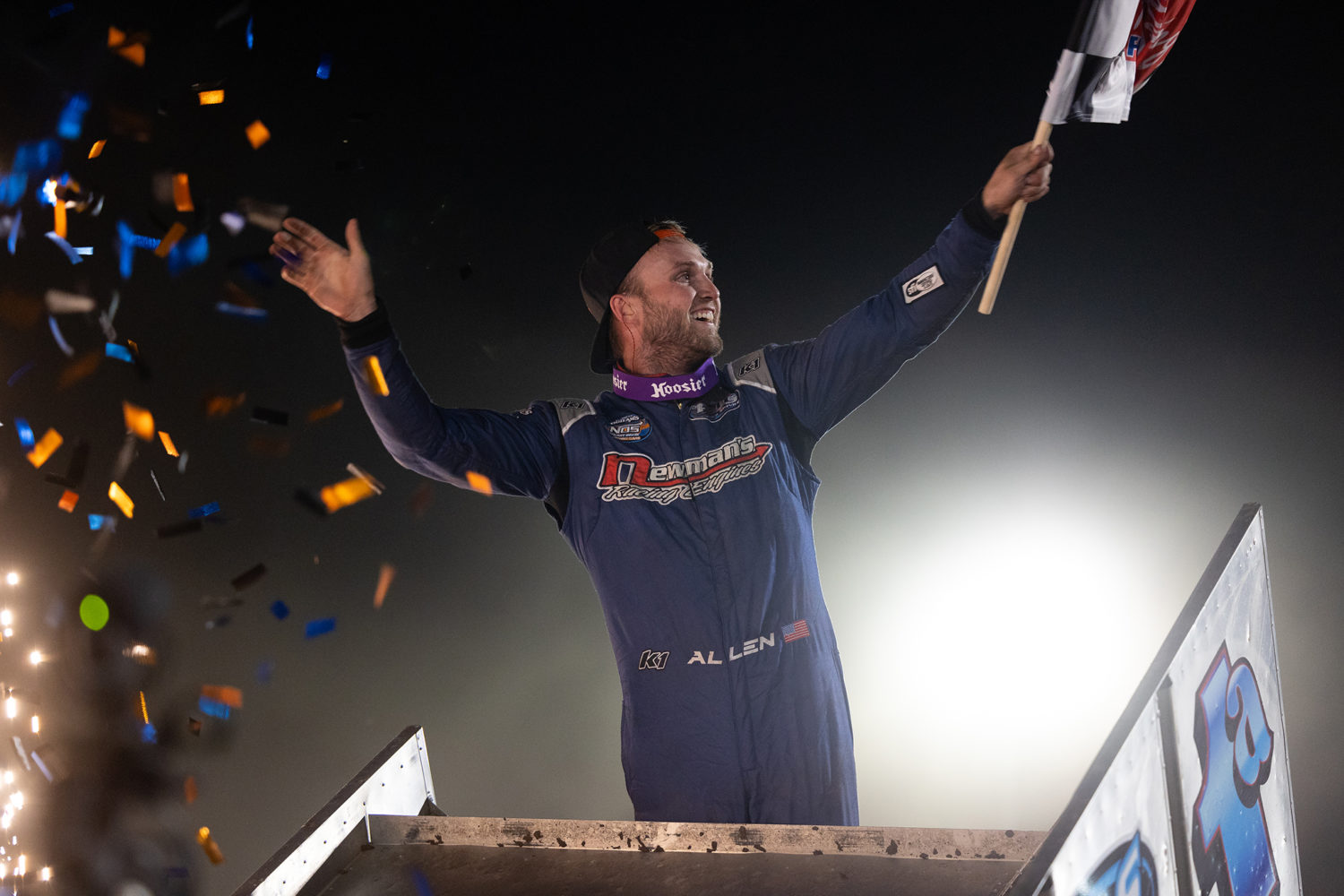 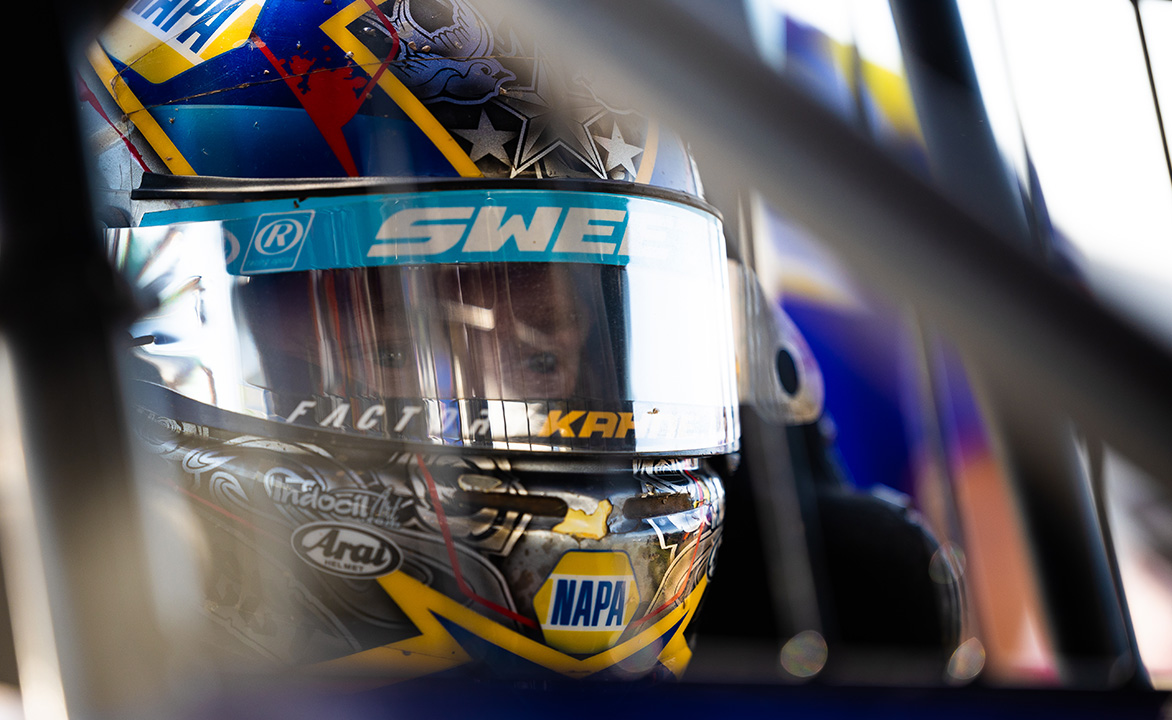 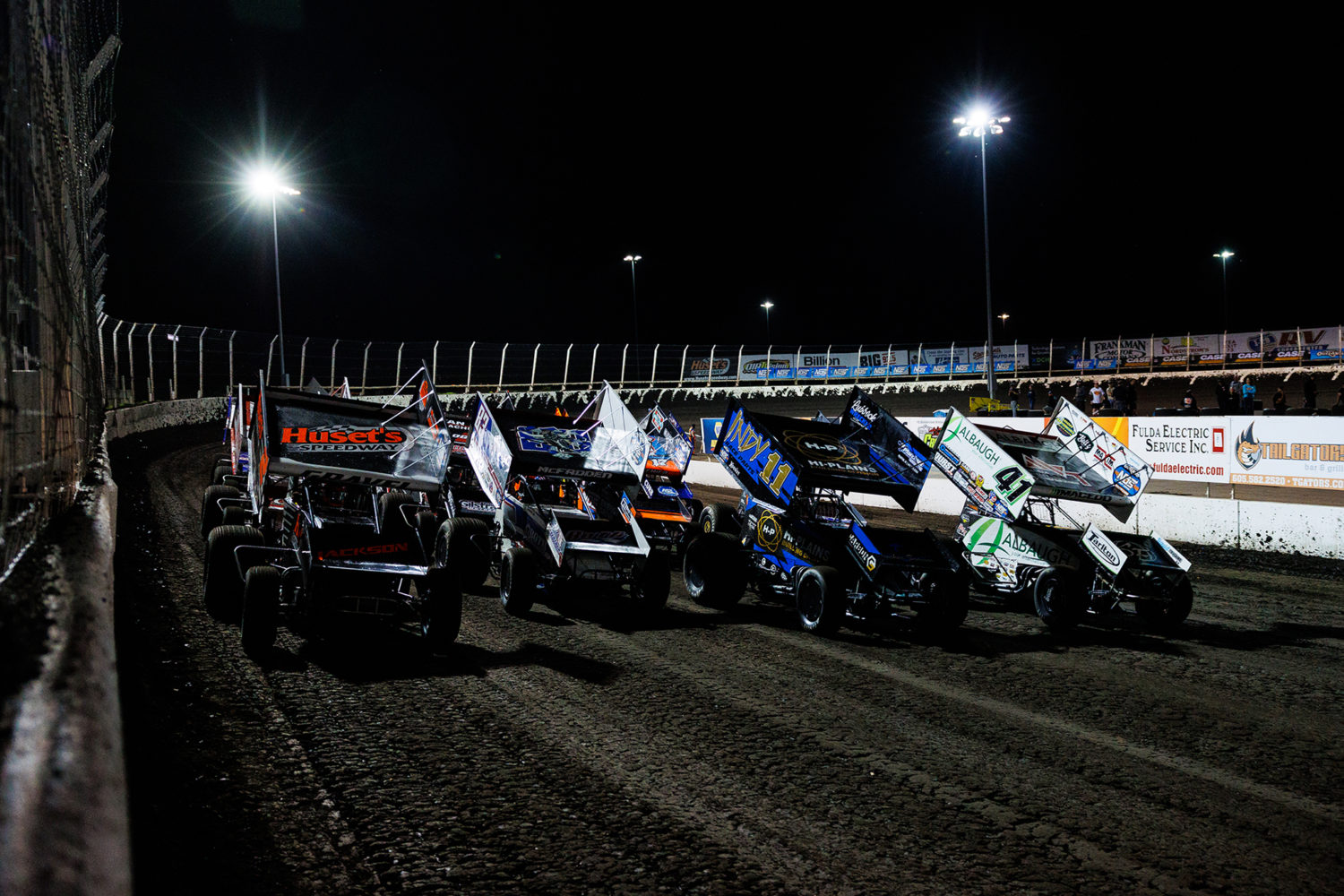 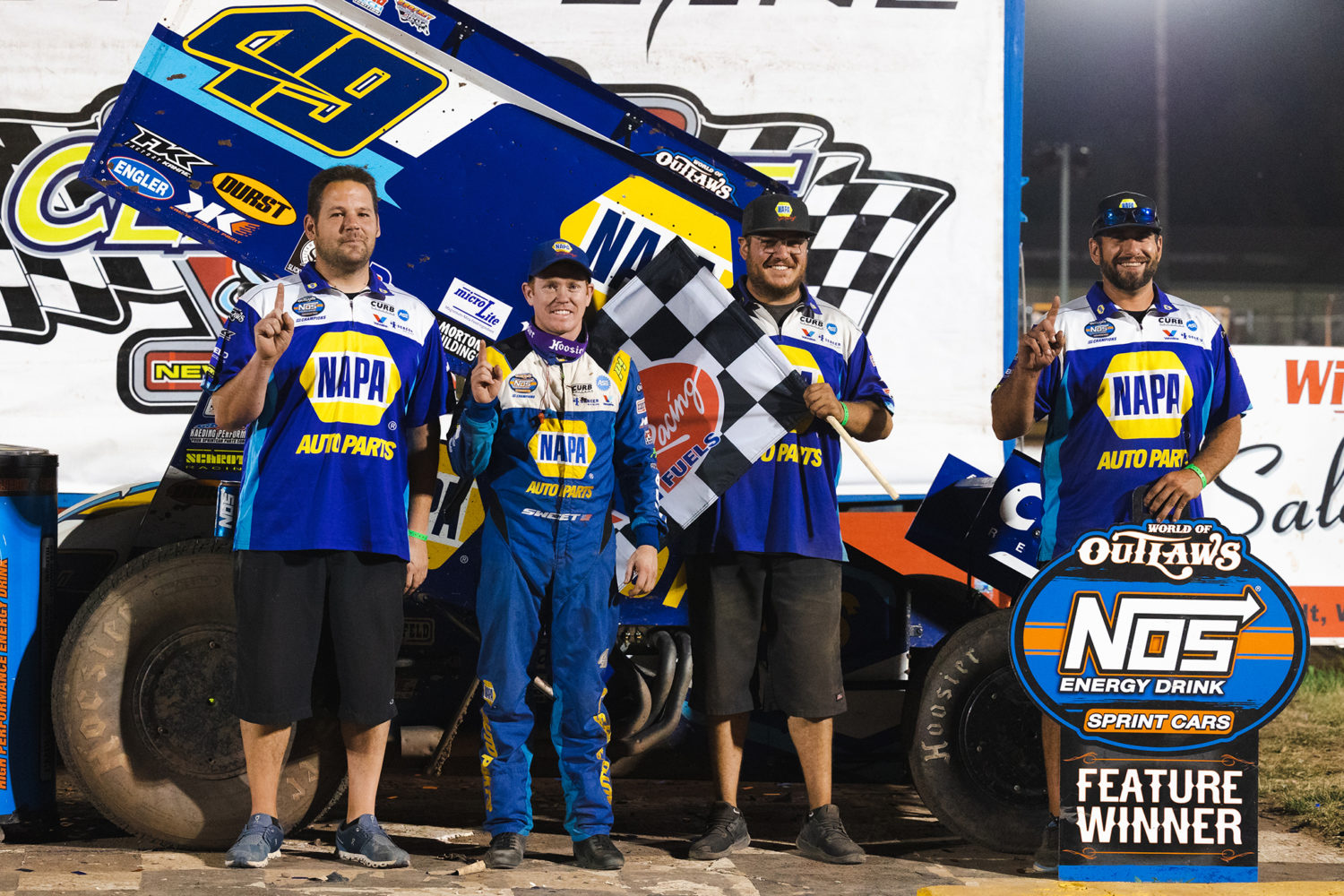 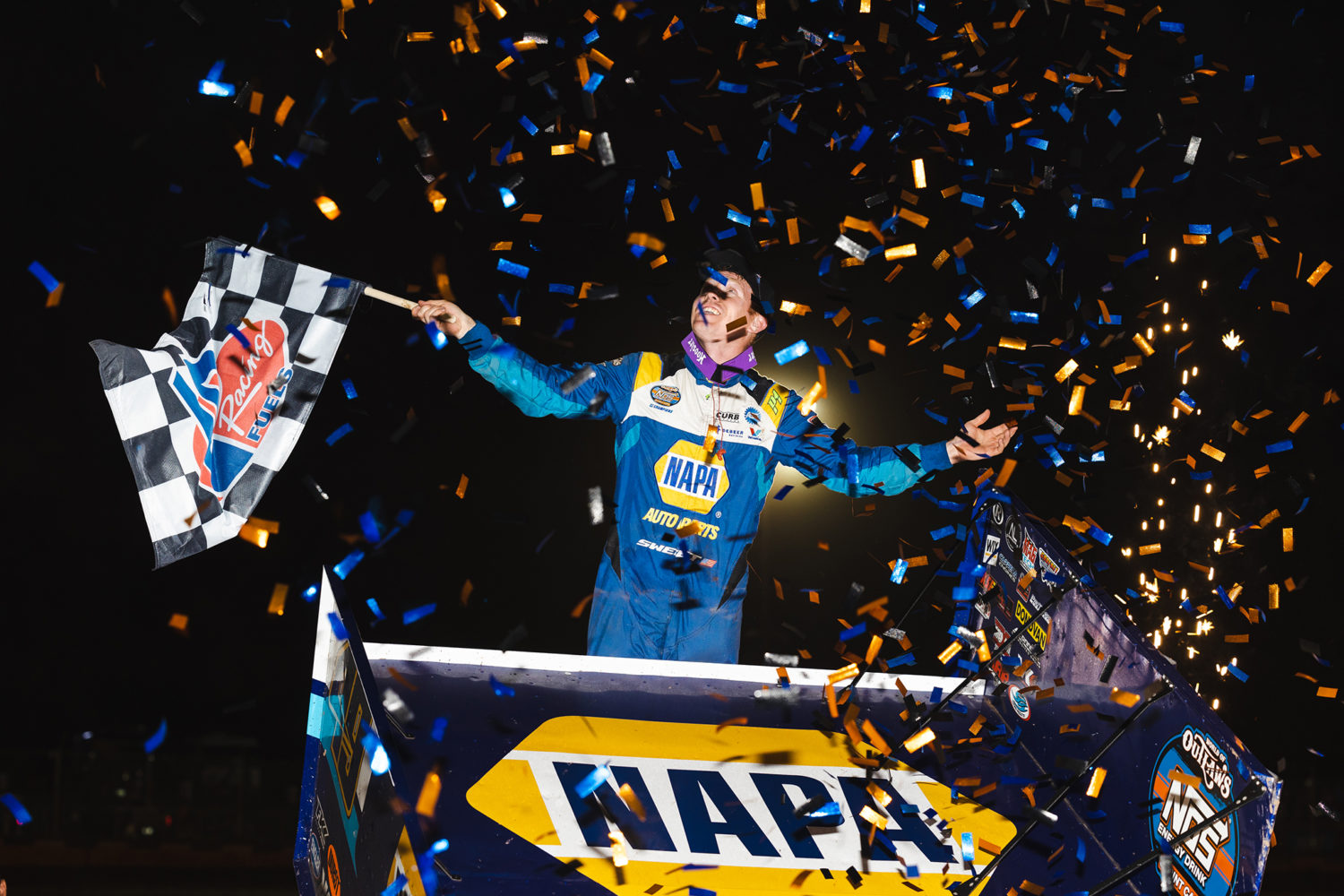