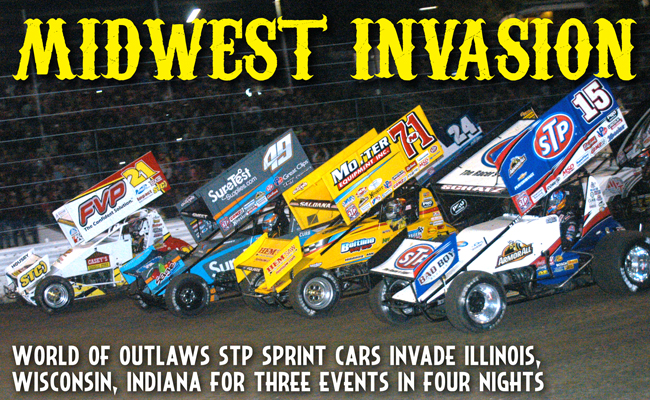 Saldana, Pittman and Gravel Have Unique Perspectives on Week Ahead in Midwest for World of Outlaws STP Sprint Car Series

Three events in four nights will test ‘The Greatest Show on Dirt’ in Illinois, Wisconsin and Indiana

JACKSONVILLE, Ill. – May 5, 2014 – The World of Outlaws STP Sprint Car Series is looking ahead this week to three races in four days at very unique venues across Illinois, Wisconsin and Indiana.

Three drivers have distinct experiences at the upcoming tracks. The series will be making its debut on Wednesday at Jacksonville (Ill.) Speedway, a quarter-mile banked dirt oval where current series points leader Joey Saldana did some racing in the ’90s; then on Friday for the third time in series history the Outlaws invade 1/3-mile Wilmot (Wis.) Raceway, where defending series champion Daryn Pittman has finished first and third and has led 55 of 75 laps there; and finally on Saturday for the 32nd time “The Greatest Show on Dirt” returns to quarter-mile Tri-State Speedway in Haubstadt, Ind., where last year David Gravel was the runner-up to the car he’s currently racing.

“Jacksonville is right outside of Springfield, where the Outlaws ran the mile years ago,” said Saldana, of Brownsburg, Ind., who last raced at Jacksonville in 1998. “I think the track was always in the background and never really got the exposure it deserved, so it’s pretty cool they’re finally getting an Outlaw race.”

Saldana owns a 1-point advantage over Paul McMahan in the championship standings through 21 races, a long way from the World Finals in November. Still, being on top is no doubt a confidence builder for the Motter Motorsports team that came together just before the start of the 2013 season.

“I’m not worried about points right now,” Saldana said. “For us, we need to win races. We need to go into Jacksonville and qualify well, go in there and race well. It’s definitely going to be a tight racetrack and the racing is going to be tight.”

At a venue like Jacksonville where the series is racing for the first time, or even Wilmot where the series is competing for only the third time, drivers who can adapt quickly will obviously find themselves up front. That’s what makes World of Outlaws STP Sprint Car Series racers who compete February to November throughout North America stand out.

“I think it’s just the amount that we race, how much variety of different tracks we see across the country gives us an advantage to pick up on something faster,” said Pittman, a native of Owasso, Okla., who led the championship wire-to-wire last year for his first series title in his Kasey Kahne Racing car. “We don’t have a choice, we have to pick it up quick because we’re limited on how much practice we get, how many times we’re on the track. You better pick it up fast or somebody else is going to beat you.”

Pittman, who also has a few laps at Jacksonville under his belt, is confident in his abilities at tracks where the series rarely competes.

“I’ve always felt like new tracks, or tracks where nobody has a lot of experience, I thought I excelled at pretty well,” said Pittman, who held off Donny Schatz and Jason Meyers to win the Outlaws’ last race at Wilmot in 2008. “I always love going to new places, I have a pretty good history of going to a track for the first time and picking it up fairly quickly and being in contention for the win. … I think on really flat, tricky places like Wilmot I have always had a pretty decent feel for what I need the car to do on those types of tracks.”

Many of the drivers have years of experience at Saturday’s venue, Tri-State Speedway. So perhaps it was a bit surprising one of the youngest racers in the sport, 21-year-old David Gravel, nearly pulled off a win last season at Tom Helfrich’s meticulous quarter-mile oval in southwestern Indiana. Gravel was filling in for Bill Rose in 2013 at Tri-State when he was runner-up to Tim Kaeding and the Roth Motorsports #83. Last week, Gravel hopped in that Roth Motorsports #83 car and on Saturday night at Eldora Speedway he picked up his second win of the season and fourth of his career.

“Last year at Haubstadt we ran real well, and obviously we were fast this past weekend,” said Gravel, of Watertown, Conn. “I’m definitely looking forward to Tri-State. It’s a really fun track. It should be a good weekend.”

All four of Gravel’s World of Outlaws STP Sprint Car Series victories have come in different cars. He’s quick to adjust and confident with his new team after only one weekend of competition.

“Ever since the first flight of hot laps in that car I was pretty comfortable,” Gravel said. “There wasn’t too much of a learning curve. The crew guys really work well together and care about my opinion and what I’m comfortable with. The past year I’ve driven quite a few different cars, and I seemed to be fast in almost every one I drove. Just driving different cars, driving different tracks is definitely a positive. When you’re strapped in, you can’t really see what the car looks like on the outside so you just drive it the same.”

No doubt the action will be intense on three consecutive short tracks in four days before the series sets sail next week for its first trip of the year to Pennsylvania. For Saldana, Pittman and Gravel, the anticipation is certainly building for tracks where history might just be on their side.

Jacksonville Speedway is a high-banked, quarter-mile oval. The series will be competing at Jacksonville for the first time in history.

Previous winners at Wilmot Raceway include:

Tri-State Speedway is a high-banked, quarter-mile oval. The track record of 11.110 seconds was established by Sammy Swindell on Oct. 8, 2004.

LISTEN LIVE: Listen live as the Voice of the Outlaws, Johnny Gibson, calls the action at all World of Outlaws STP Sprint Car Series events on the DIRT Radio Network, with a number of events throughout the season being featured as a DIRTVision Cybercast. Visit DIRTVision.com for more information on all the features.

UP NEXT: The World of Outlaws STP Sprint Car Series invades Pennsylvania for the first time this season, beginning Wednesday, May 14, with the Gettysburg Clash at Lincoln Speedway in Abbottstown, Pa.

There have been 21 World of Outlaws STP Sprint Car Series A-mains this season.