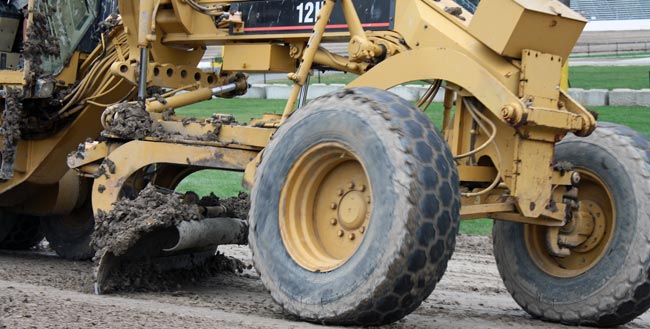 MARNE, MI – Sept. 20, 2013 – Saturated track conditions resulting from wet weather over the past two days have forced Berlin Raceway and World of Outlaws Late Model Series officials to condense the second annual Keyser Manufacturing ‘Down & Dirty’ By NAPA Auto Parts weekend to a single day of action on Saturday (Sept. 21).

Friday night’s scheduled qualifying program at Berlin was canceled late this afternoon after it was determined that the dirt surface spread atop the 7/16th-mile asphalt oval could not be run in sufficiently to allow safe and competitive racing.

The loss of Friday night’s show sets up a Saturday evening program headlined by a 75-lap WoO LMS A-Main paying $15,000 to win. Racing for the DIRTcar UMP Modified, Street Stock and 4-Cylinder divisions will also be part of Saturday’s card.

“We were looking forward to two huge nights of racing here at Berlin Raceway but unfortunately Mother Nature hasn’t cooperated with us to allow it,” said Berlin general manager Mike Bursley. “We want to make sure we provide the racers and fans the exciting racing that gained last year’s inaugural World of Outlaws Late Model Series event so much attention but that wouldn’t be possible tonight because the surface is simply too saturated.

“After consulting with Jeremie Corcoran (the promoter of New York’s Canandaigua Motorsports Park who was brought in by Berlin management to handle track preparation) it became clear that the racetrack has too much moisture in it to be dried and worked in well enough to go racing tonight. With better weather forecast for Saturday, our best course of action is to focus on preparing the racetrack for one big night of racing.”

Track officials said that the Keyser Manufacturing-sponsored party that was scheduled to take place in the barns outside turn one following tonight’s racing program has been rescheduled for Saturday at 1 p.m. A pig roast and live band will highlight the pre-race bash.

The value of tickets for Friday night’s qualifying program can be used toward the purchase of tickets to an upcoming event at Berlin – including Saturday night’s WoO LMS program – or exchanged for a speedway gift card.

More information on the Keyser Manufacturing ‘Down & Dirty’ weekend at Berlin Raceway can be obtained by logging on to www.berlinraceway.com or calling 616-677-5000.