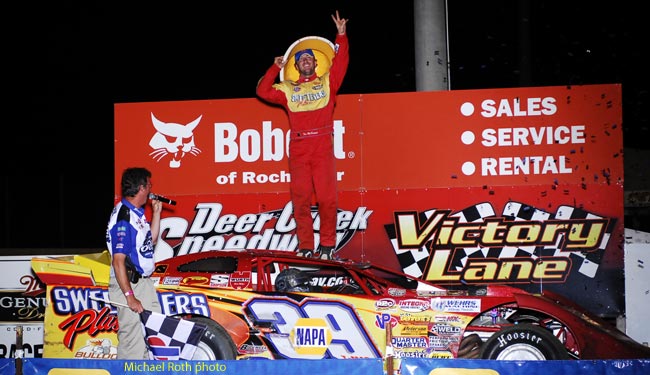 “It couldn’t have been a better week,” pronounced a beaming McCreadie, whose 7-pound, 7-ounce baby boy was born at 2:39 a.m. on July 5. “I came home (from the WoO LMS holiday-weekend doubleheader in Tennessee) in time to make it for my son’s delivery. That was an experience in itself, but to top it off with a win in my first race since he was born – man, it’s too cool.”

McCreadie roared off the outside pole to lead every lap of the A-Main in his Sweeteners Plus Rocket car, but he barely beat Lanigan to the finish line in a showdown of former World of Outlaws Late Model Series champions. Lanigan erased McCreadie’s full straightaway advantage during the 30-lap stretch of green-flag racing that closed the event but couldn’t complete a pass in the final frenetic circuits, falling short by a scant 0.047 of a second behind the wheel of his GottaRace.com Rocket.

Jimmy Mars of Menomonie, Wis., who started 11th, steered his MB Customs mount into third place on lap 34 and stayed there to the finish, running just a few car lengths behind Lanigan down the stretch. Polesitter Rick Eckert of York, Pa., settled for fourth place with a Team Zero by Bloomquist car that he said became “too tight,” and fourth-starter Shane Clanton of Fayetteville, Ga., completed the top five in the RSD Enterprises Rocket after climbing as high as second early in the event.

In a race that was slowed by seven cautions – all coming during the first 20 laps – McCreadie appeared headed toward a convincing victory. He held a commanding lead shortly after the halfway point was passed.

But Lanigan, who started third but fell to fifth during the race’s early stages, fought back to reach second place with a pass of Eckert on lap 32. He chased down McCreadie without the benefit of a caution flag and spent the last three circuits bidding for the lead all around the three-eighths-mile oval.

Lanigan clearly had the faster car at the end of the event. McCreadie, however, was savvy enough to turn back the challenge.

“I know we pulled away a little over the mid-stretch, but from like lap 30 on I didn’t feel that good,” said McCreadie. “I don’t know if we overheated the right-rear tire, but I just felt like I was hanging in the center of the corners and fading.

“I saw (Lanigan) get under me with a few laps to go, but I couldn’t get down there right to run as low as he was. At that point I’d run 45 some odd laps up on the cushion, so what do you do? You can’t just try to do something different.”

McCreadie did direct his car to the inside groove rounding turns three and four on the final lap – a strategy that likely paid off.

“I just figured that on the last lap I better go to where he is (on the bottom) because if I stayed way wide getting into three I probably would’ve gotten slid,” said McCreadie, who registered his 16th career win on the WoO LMS. “It was the last lap, you know, and it’s 10-grand on the line, so I knew that if I went (into three) where I had been the last three laps, (Lanigan) would’ve done what he had to do and cleared me. He almost had me cleared with one (lap) to go, but he gave me just enough room to get by.”

McCreadie lauded Lanigan’s gentlemanly manner during the race-deciding battle: “He raced me good through three and four. He could’ve slid me twice, and he didn’t. That’s just a professional way to race. I caught him before he left (Victory Lane) and told him I appreciated the way he raced me and I’ll race him the same way in the future. I’ll try to give him every professional courtesy I can.”

Sitting dejectedly in the window of his car just beyond McCreadie’s post-race celebration, Lanigan was asked to describe the final laps. He said only that they were “close,” and when asked whether he would have done anything different if he could re-run the race, he tersely responded, “Nope.”

“We just can’t get a win,” said Lanigan, who has fallen short several times since his lone WoO LMS victory this season, on March 19 at Ocala (Fla.) Speedway. “We were coming, but (McCreadie) moved to the bottom to block me. That’s what you’re supposed to do when you’re leading the race. I’d would’ve done the same thing.”

Finishing in positions 6-10 was 17th-starter Brian Birkhofer of Muscatine, Iowa; Steve Francis of Ashland, Ky., who ran in the top five for the race’s first 17 laps; Chub Frank of Bear Lake, Pa.; rookie Austin Hubbard of Seaford, Del., who pitted on lap seven after being collected when Brady Smith of Solon Springs, Wis., spun into the inside berm in turn four; and defending WoO LMS champion Josh Richards of Shinnston, W.Va., who started fifth but struggled throughout the race.

Richards saw his points lead shrink to 16 points over McCreadie, who shaved 20 markers off the deficit he faced entering the opening event of the four-race ‘Wild West Tour.’

Chad Simpson of Mt. Vernon, Iowa, finished 12th, earning himself the $500 WoO LMS ‘Bonus Bucks’ cash for being the highest-finishing driver who has never won a tour A-Main and wasn’t ranked among the top 12 in the points standings.

A field of 38 cars was signed in for the Gopher 50, which was part of the WoO LMS for the sixth consecutive year. A big crowd turned out despite a threat of thunderstorms.

Francis was the fastest qualifier during the Ohlins Shocks Time Trials with a lap of 14.949 seconds. It was his first fast-time honor of the 2010 season.

Heat winners were Francis, Richards, McCreadie and Eckert, each of whom earned $100 bonuses from NAPA for their efforts. The B-Mains were captured by Birkhofer and Andrew McKay of Edina, Minn.

WoO LMS regular Tim Fuller of Watertown, N.Y., entered the evening’s action just two days after undergoing an emergency appendectomy, but he was too sore to race competitively. He gained entry to the A-Main with a provisional spot but only circled the track during the pace laps to collect last-place points.

FOLLOW THE ACTION ON TWITTER: Fans can now keep up-to-date with the World of Outlaws Late Model Series online and through text messages on cell phones via Twitter, the internet’s fast-growing social-networking and micro-blogging website. Updates are provided to Twitter ‘followers’ of the WoO LMS throughout each race night, and fans also receive breaking news and interesting notes from the tour.

To sign-up as a WoO LMS ‘follower’ on Twitter to receive updates anywhere at anytime, visit http://twitter.com/WoOLateModels.

Listeners will need Windows Media Player 9 or higher to listen to the DIRT Radio Network. For technical support or questions, e-mail [email protected]