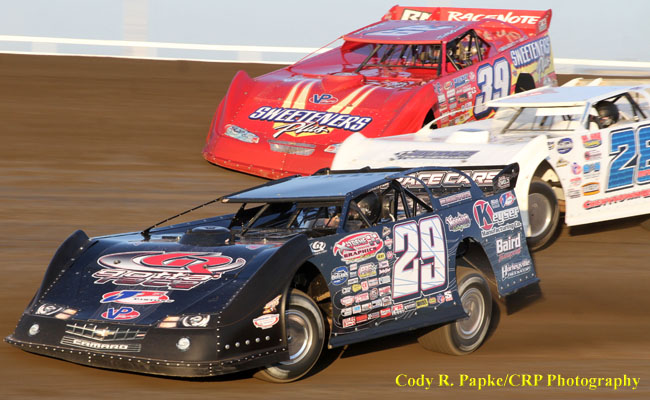 ABERDEEN, S.D. – July 15, 2014 – Darrell Lanigan may have led every lap of Tuesday night’s World of Outlaws Late Model Series race at Brown County Speedway, but collecting his ninth A-Main victory of the season was far from easy for the two-time series champion and current points leader.

Lanigan, 44, of Union, Ky., survived heavy pressure from Tim McCreadie midway through the 50-lap race and later turned back Morgan Bagley’s late charge to claim his second consecutive series victory in front of near-capacity crowd at the third-mile oval that hosted its first WoO LMS event since 2008.

Lanigan, who also won Sunday’s A-Main at Deer Creek Speedway in Spring Valley, Minn., led by 1.097 seconds at the finish in claiming the third of four races on the WoO LMS Wild West Tour.

“The car was good tonight, just got stuck in that lapped traffic a little bit,” said Lanigan, who added to his lead atop the national tour’s all-time wins list with his 62nd career WoO LMS victory. “McCreadie got up there on the outside of me and I had to move up a little bit. The car got better once I moved up and it definitely got better at the end.”

Advancing from his seventh starting spot, Bagley of Tyler, Texas, pressured Lanigan following the race’s only restart with 10 laps remaining. But the second-year WoO LMS competitor again came up one position short of claiming his first series victory in finishing runner-up to Lanigan for the second straight race.

Fifth-starting McCreadie of Watertown, N.Y., was third at the finish after recovering from near disaster when he slipped over the banking while attempting to drive around Lanigan on lap 33. Third-starting Rick Eckert or York, Pa., finished fourth while sixth-starting Tim Fuller of Watertown, N.Y., rounded out the top in a race slowed by one caution.

McCreadie gave Lanigan his biggest challenge when he chased down the leader in traffic just before the race’s halfway point. McCreadie took multiple looks under Lanigan amid heavy traffic between laps 25 and 30 before switching to the high groove once the leaders reached clear track.

McCreadie’s high line appeared to be quicker than Lanigan’s lane around the bottom of the track, but his bid to take the lead was denied when Lanigan also switched to the high side entering turn one on lap 33.

Lanigan’s abrupt lane switch forced McCreadie up the track and over the banking, effectively ending his chance at victory even though he maintained control of his car and drove back on the racetrack in the fourth position.

McCreadie recovered to move by Eckert for third late in the race but couldn’t run down Lanigan and Bagley in the closing laps. He settled for third but wasn’t pleased with the lap-33 incident.

“He’s doing whatever it takes to win and that’s what we gotta start doing I guess,” said McCreadie, who’s currently third in the WoO LMS points standings with just one victory on the year. “It’s tough. Sometimes it’s like he’s got eyes in the back of his head. I never would’ve thought he could’ve went to the top when I poked him on the bottom for five laps. But he’s good right now; we just gotta get better.”

Lanigan said he was aware that McCreadie was looking to his outside, but he felt he had moved back ahead of his challenger before making his move to the top groove.

“I knew it was close, but I thought I had him clear there when I moved up,” Lanigan said. “I don’t think I touched him. I think he kind of ran out of room up there and went over the lip a little bit. The lip’s really bad when you get to the top up there.”

Continuing his upswing on the series, Bagley, last year’s runner-up in the WoO LMS Rookie of the Year chase, notched his third straight top-five finish and his sixth top-10 result in the past seven series races. He was happy to score another solid finish but frustrated to once again fall just shy of a breakthrough victory.

“Maybe one night the tables will turn and you can talk to me first and Darrell second,” Bagley told WoO LMS announcer Ben Shelton during his post-race interview. “We got a good program working here, just trying to stick with it and do a little fine tuning and not get too far out of the ballpark.”

The race’s only caution occurred with 40 laps complete when Shane Clanton of Zebulon, Ga., slowed woes on the front straightaway before heading to the pit area.