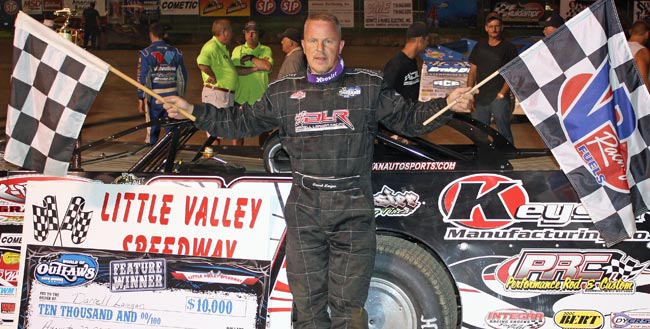 But while Lanigan cruised alone out front for virtually the entire distance to score his series-leading ninth triumph of 2013, his final margin of victory was a slight 0.377 of a second. That’s because Dan Stone of Thompson, Pa., made a gallant late-race charge, overtaking both Rick Eckert of York, Pa., and Josh Richards of Shinnston, W.Va., over the final seven circuits and closing within a car length of Lanigan at the checkered flag.

Richards settled for third place after starting from the pole position, maintaining his comfortable lead in the WoO LMS points standings with 11 races remaining on the schedule. The two-time series champion ended the night with a 62-point advantage over Lanigan, who moved past Shane Clanton of Zebulon, Ga., for second in the title battle.

Clanton stayed within two points of Lanigan in the standings by finishing fourth after rallying from a lap-six bounce over the inside berm in turn two that caused him to fall from fourth to eighth in the running order. Eckert settled for fifth after climbing as high as second early in the distance.

Lanigan, 43, almost precisely duplicated his run to victory in last year’s inaugural WoO LMS event at the paper-clip-shaped half-mile oval. He once again roared off the outside pole to pace the field from start to finish, earning himself a $10,650 payoff.

The defending WoO LMS champion even was back behind the wheel of the Rocket car he used for much of his record-breaking success on last year’s tour. The machine was knocked out of action in June by serious damage it sustained in a heat-race crash during the DIRTcar UMP-sanctioned Dream weekend at Ohio’s Eldora Speedway, but Lanigan decided to fix it up because he hasn’t been totally satisfied with the performance of two new cars he has been campaigning this summer.

“We just finally made a couple weeks time and got it back together this week,” Lanigan said of the car, which needed new front and rear clips. “We rebuilt the whole car and got it back to new, and it’s definitely back to where it was. Sometimes you get a good car, a car you really like, and this is definitely one of the good ones.”

After beating the polesitting Richards, 25, to the first turn to grab the lead at the initial green flag, Lanigan dominated most of the race, building an edge of as much as a half-straightaway. He was never seriously challenged, but Stone did threaten him.

Stone, 37, settled into fourth place early in the A-Main after starting sixth. He was still running in the position with 10 laps to go when he began tossing his Rocket car around the top side of Little Valley’s tight corners. He passed Eckert for third on lap 43, overtook Richards for second on lap 45 and erased Lanigan’s two-second lead before running out of time.

“I knew somebody was coming,” said Lanigan. “I looked at the board and knew it was a different car (than had been in the top three throughout the race). I just kind of figured (Stone) had a harder tire on, but I come to find out that he was just running a different groove. I guess he found that high groove before anybody else did. I didn’t even think about going up there. It seemed crumbly to me, but he definitely got up there and made it work.

“It’s kind of hard to tell where the guy is behind you and what he’s doing,” he continued, “but I knew if I just ran my line on the bottom it was gonna be hard to pass.”

Beating Stone to the finish line put Lanigan in the WoO LMS history book as the first driver to win 50 A-Mains.

“That’s a big accomplishment to get 50 wins,” said the preternaturally calm Lanigan. “That’s definitely a bunch of wins (with) the Outlaws.”

Stone, meanwhile, was happy with his second runner-up finish of 2013 on the WoO LMS after taking just a bit too long to get rolling.

“I didn’t get tired midway through the race, but I kind of got hypnotized or something running behind those guys and wasn’t running where I needed to be,” said Stone, who owns two career WoO LMS A-Main victories. “Once we caught that lapped traffic I tried (the outside lane) and I was like, ‘Ugh! I should’ve been here the whole time.’

“We really ran Lanigan down after getting to second. I can’t believe it. Maybe two more laps would’ve been enough, but 50 laps should be long enough so congratulations to him – man, he’s just good everywhere he goes.

“To be running up there,” he added, “we’re definitely happy. It’s a good night of pay for us.”

Just two caution flags slowed the event. Clint Smith of Senoia, Ga., brought out the first yellow flag on lap 11 when he stopped with terminal mechanical trouble on, and Mike Knight of Ripley, N.Y., relinquished fourth place on lap 16 due to a parts failure.

Clanton topped the evening’s 28-car field in Ohlins Shocks Time Trials, earning his second fast-time honor of 2013 with a lap of 21.867 seconds.

Heat winners were Clanton, Knight and Lanigan, and Coleby Frye of Dover, Pa., captured the B-Main.

The WoO LMS will be idle for one day before returning to action on Saturday night (Aug. 24) in the fourth annual Raye Vest Memorial at Winchester (Va.) Speedway.

A classic half-mile fairgrounds oval that sports extremely long straightaway and flat corners, Little Valley ranks as one of the bigger tracks on the 2013 WoO LMS.

Darrell does it again

10:50 p.m. – Darrell Lanigan showed the fast way around Little Valley Speedway for the second consecutive year, leading all 50 laps of the A-Main for his series-leading ninth triumph of the season and milestone 50th career win on the WoO LMS.

But while Lanigan cruised alone out front for virtually the entire distance, his final margin of victory was just 0.377 of a second. That’s because Dan Stone made a gallant late-race charge, overtaking both Rick Eckert and Josh Richards over the final seven circuits and closing within a car length of Lanigan at the checkered flag.

Richards settled for third place after starting from the pole position. Shane Clanton finished fourth — rallying after a lap-six bounce over the inside berm in turn two caused him to fall from fourth to eighth in the running order — and Eckert settled for fifth.

9:10 p.m. – Josh Richards was the last driver to redraw his starting spot for the A-Main – and on this night, that was a good thing. The only ball left in the WoO LMS canister was the No. 1, giving Richards the pole position for tonight’s 50-lapper.

The BRP 360 Late Model Tour feature is currently on the track, with the E-Mod A-Main to follow. Then the WoO LMS finale will hit the speedway.

8:05 p.m. – Shane Clanton, Mike Knight and Darrell Lanigan won the three 10-lap heat races …. Clanton turned the fastest lap of the heat winners, clicking off a top time of 21.510 seconds, while Lanigan’s victory margin of 2.500 seconds over Josh Richards was the largest of the victors…. Knight outdueled Rick Eckert to capture Heat 2, beating the former WoO LMS champion by just 0.070 of a second. Coming off a career-best WoO LMS finish of second in the tour’s June 1 stop at Stateline Speedway in Busti, N.Y., Knight is eyeing his first-ever victory tonight…. Tim Fuller made one of the most noteworthy charges in the prelims, advancing from the eighth starting spot to finish fourth in Heat 1…. Bub McCool and Chub Frank were the only WoO LMS regulars who failed to transfer through heats….

Heat race results can be viewed by clicking here….

7:30 p.m. – On Wednesday morning, WoO LMS rookie Morgan Bagley feared that he would end up missing tonight’s racing program. After reporting on Tuesday for jury duty near his home in Longview, Texas, he found himself picked to sit on a jury in a case starting Wednesday.

Fortunately for Bagley, the case he heard didn’t take long. By Wednesday evening the courtroom session was completed and he and his fellow jurors reached a guilty verdict on the defendant, who was charged with possession of a controlled substance.

Bagley was able to fly into Buffalo International Airport this afternoon – not long after Air Force One landed there for President Barack Obama to begin a two-day trip through upstate New York and Northeast Pennsylvania – and met his crewmen Randall Edwards and Nick Hoover at the track.

7:20 p.m. – Hoping to give his injured father-in-law Ron Davies something to cheer about, Shane Clanton kicked off the night by registering the fastest lap in Ohlins Shocks Time Trials at 21.867 seconds. It was Clanton’s second fast-time honor of 2013.

In an interesting quirk, the drivers who clocked in directly after Clanton — Mike Knight (22.045 seconds) and Darrell Lanigan (22.114 seconds) — also finished second and third, respectively, behind Clanton in the June 1 WoO LMS A-Main at Stateline Speedway in Busti, N.Y., which sits just 45 minutes southwest of Little Valley.

Three 10-lap heat races will be coming up soon. The top-six finishers from each will move on to the 50-lap A-Main, with the top-two redrawing for starting spots in the first three rows of the headliner.

Ohlins Shocks Time Trials are now on the track.

6:35 p.m. – No driver was more looking forward to tonight’s WoO LMS invasion of Little Valley than Ron Davies, the veteran from nearby Warren, Pa., who has been one of the track’s biggest winners in recent years. He even took his Capital Race Car down to Georgia recently for a thorough check-up from Capital’s main men – Davies’s son-in-law Shane Clanton and Marshall Green – in hopes of “getting it right” for this event.

Alas, the 55-year-old veteran is not in tonight’s field. A wicked crash he rode out during heat action last Friday night at Lernerville Speedway in Sarver, Pa., had made him a spectator.

The machine Davies planned to run tonight was virtually demolished after he flipped wildly into the concrete wall and catch fence in front of Lernerville’s pit grandstand off turn four. A stuck throttle sent him hurtling off the track at high speed; witnesses said his car flew at least 20 feet into the air before crashing down on the wall that sits well over the outside lip of the speedway.

Davies was extremely shaken up from the impact and was transported to a local hospital for treatment. He suffered a concussion and other assorted injuries, including an extremely sore left shoulder and bruised hip. He also bit down hard on the side of his tongue, drawing blood that scared the first responders to the scene.

“Fortunately my car held up well and all the safety equipment worked,” Davies said while sitting in a director’s chair near Clanton’s trailer as a long line of well-wishers stopped by to check how he was feeling. “My shoulder is probably the worst. The doctors said I might need surgery on it – and that would be at least a two-month recovery, so racing for the rest of this year is probably done.”

Davies said he had been contemplating retirement at the end of this season after 37 years behind the wheel, but he’s not so sure about going through with that now.

“You never say never,” said Davies. “We might have to come back now next year.”

5:45 p.m. – More than two-dozen cars are signed in for action as the 6 p.m. start of the drivers’ meeting approaches.