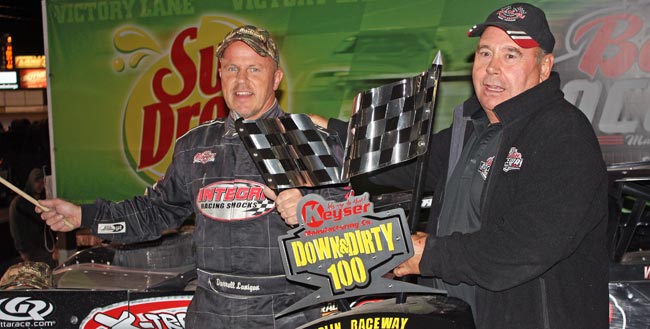 MARNE, MI – Sept. 21, 2013 – This time Darrell Lanigan didn’t need to pull off any late-race dramatics to win the Keyser Manufacturing ‘Down & Dirty 75’ Presented by NAPA Auto Parts at Berlin Raceway.

Lanigan, 43, of Union, Ky., emerged victorious in the World of Outlaws Late Model Series special for the second consecutive year in convincing fashion, grabbing the lead from Shane Clanton of Zebulon, Ga., on lap 33 and dominating the remainder of the distance behind the wheel of his self-owned Rocket car.

Continuing his mastery of a 7/16th-mile asphalt oval that for the second straight year was covered with clay for a late-season return to its dirt-track roots, Lanigan turned back brief threats from Clanton on restarts and while negotiating lapped traffic to cross the finish line 4.629 seconds – over a full straightaway – ahead of his fellow WoO LMS regular. The two-time tour champion earned $15,650 for his series-leading 11th triumph of 2013.

“We all put our heads together on this setup and it was unbelievable,” said Lanigan, who recorded his 52nd career win on the WoO LMS. “It’s a completely different setup from what we had last year (at Berlin), but it was definitely good.”

Rick Eckert of York, Pa., who started from the pole position and led laps 1-25, finished third at Berlin for the second consecutive year. WoO LMS points leader Josh Richards of Shinnston, W.Va., continued his march to a third career championship with a steady fourth-place finish from the seventh starting spot and 16th-starter Tim Fuller of Watertown, N.Y., primarily used the outside groove to charge forward and place fifth.

Lanigan actually got off to a slow start in the A-Main, slipping from his fourth starting spot to sixth place on the opening lap. Richards was among the drivers who surged ahead of Lanigan at the initial green flag.

But Lanigan quickly regained his footing, driving by Jeep VanWormer of Pinconning, Mich., for fifth on lap seven, Richards for fourth on lap nine and Bub McCool of Vicksburg, Miss., for third on lap 11. He needed just eight more circuits to erase his straightaway deficit to second-place Clanton and grabbed the runner-up position on lap 21.

A restart on lap 22 saw Clanton run the outside past Lanigan to regain second place and on the 26th lap the Georgian steered his Kennedy Motorsports Capital Race Car around Eckert to assume command. But Lanigan soon flexed his muscle, passing Eckert for second on lap 29 and overtaking Clanton with an inside move on lap 33 to take the lead for good.

“I got stuck on the outside there at the beginning and just had to bide my time to get back down there to the bottom,” said Lanigan. “Once I got to the bottom my car was on a rail down there.”

Aside from a brief outside challenge from Clanton after a lap-37 restart, Lanigan’s only real scare came with just over 10 laps remaining when he had some trouble lapping Rich Neiser of Fruitport, Mich. Lanigan’s two-second-plus lead over Clanton almost completely disappeared before he cleared Neiser on lap 65 and proceeded to pull away with ease.

“They showed me (Clanton) was closing in a little bit, so I knew I had to do something there,” Lanigan said of the signals he received from his crew while riding behind Neiser. “He was making it awful wide down the straightaways and tight on the bottom, so I just knew I had to do something quick. I got by him and got clean air, and (then) the car was good the rest of the way.”

One year after winning the inaugural ‘Down & Dirty’ event at Berlin with a late-race rally that carried him into the lead with just five laps to go, Lanigan happily spent the final circuits cruising alone around a speedway that he praised for its competitiveness.

“The track raced great,” said Lanigan. “They did a phenomenal job with this dirt on here. It was a little choppy coming off of two, but other than that the track was unbelievable again.”

Clanton, 38, spent time in the lead (laps 26-32) for the second consecutive year at Berlin but once again fell short of victory. He improved to second place after finishing fourth in 2012.

“That top (groove) kind of died there,” said Clanton, who entered the event tied for second with Lanigan in the WoO LMS points standings and ended it sitting four points behind the victor in third place. “We got so far out in (turns) three and four that it took all my momentum. Darrell was better through those holes in one and two too, so we run second again.”

Clanton registered his fifth runner-up finish of 2013 on the WoO LMS. He has won four A-Mains but last reached Victory Lane on June 1 at Stateline Speedway in Busti, N.Y.

Eckert, 47, was a serious contender for the second straight year at Berlin but ultimately was just a slight bit off the pace of Lanigan and Clanton.

“We definitely made some gains on our car from last year, but I was still a little bit free (handling),” said Eckert, who never ran worse than third in the 75-lapper. “Maybe they’ll have us back next year and we’ll figure this out.”

Matt Miller of Whitehouse, Ohio, finished sixth – the same spot from which he started – in his first WoO LMS start of 2013 in the Delong Racing No. 3, but he ran at the back end of the top 10 until gaining steam late in the distance. Chub Frank of Bear Lake, Pa., who started 15th, settled for seventh after being overtaken by Miller in the final laps. WoO LMS rookie Morgan Bagley of Longview, Texas, slipped to eighth in the rundown after running as high as fifth; Clint Smith of Senoia, Ga., placed ninth in his return to action after missing the previous weekend’s WoO LMS doubleheader due to his recovery from knee surgery; and McCool faded to a 10th-place finish.

Thirty-three cars were entered in the event, which was condensed to one evening of action after Friday night’s scheduled qualifying program was canceled because track officials determined that the track surface was too wet to allow safe and competitive racing. With the weekend cut back to just a single day, the WoO LMS A-Main was reduced to 75 laps from its scheduled 100-lap distance and the purse was readjusted, most notably from $20,000 to $15,000 for first place.

Ohlins Shocks Time Trials were split into ‘A’ and ‘B’ groups, with the first half competing for starting positions in heats one and two and the second half racing against the clock to align heats three and four.

Lanigan topped Ohlins Shocks Time Trials with a lap of 16.615 seconds during Group B. It was his fifth WoO LMS fast-time honor of 2013.

Heat winners were Miller, Clanton, Lanigan and Eckert. The B-Mains were captured by Hilliker and Brian Ruhlman of Clarklake, Mich.

Berlin is a 7/16th-mile paved track that for the second straight year has been covered with a layer of clay to host a WoO LMS weekend. Last year’s inaugural WoO LMS event was won in dramatic fashion by Darrell Lanigan.

10:45 p.m. – This time Darrell Lanigan didn’t need to pull off any late-race dramatics to win the Keyser Manufacturing ‘Down & Dirty 75’ Presented by NAPA Auto Parts.

Lanigan emerged victorious in the World of Outlaws Late Model Series special for the second consecutive year in convincing fashion, grabbing the lead from Shane Clanton on lap 32 and dominating the remainder of the distance.

Continuing his mastery of the clay-covered 7/16th-mile asphalt track, Lanigan turned back brief threats from Clanton on restarts and while negotiating lapped traffic to cross the finish line 4.629 seconds — over a full straightaway — ahead of his fellow WoO LMS regular. The two-time tour champion earned $15,000 for his series-leading 11th triumph of 2013.

Rick Eckert, whos started from the pole position and led laps 1-25, finished third at Berlin for the second consecutive year. WoO LMS points leader Josh Richards continued his march to a third career championship with a steady fourth-place finish and Tim Fuller primarily used the outside groove to place fifth after starting 16th.

9 p.m. – After the twin 12-lap B-Mains were captured by David Hilliker and Brian Ruhlman (full results can be seen here), it’s feature time for the WoO LMS. With some light rain still dancing around the area (some short bursts of moisture have been felt), the 75-lap A-Main has been moved up in the racing schedule and is in the process of being lined up.

Scrub on the point

8:25 p.m. – Rick Eckert drew the pole position for the 75-lap A-Main moments ago. He started last year’s feature at Berlin from the outside pole and finished third — a strong outing, but not what he had envisioned. He missed the setup slightly for the headliner, leaving him off the leader’s pace.

Bub McCool will start from the outside pole tonight. He finished 18th in last year’s event, dropping out midway through the race.

8:10 p.m. – Heat victories went to Matt Miller, Shane Clanton, Darrell Lanigan and Rick Eckert…. Miller dominated the first heat in the DeLong Racing No. 3, beating Bub McCool to the finish line by 6.504 seconds. Miller also turned the fastest lap of the prelims at 17.118 seconds…. Lanigan’s margin of victory in the third heat was just slightly smaller than Miller’s: a convincing 6.293 seconds over Michigander Jeep VanWormer… Clanton won the second heat by 0.708 of a second over WoO LMS rookie Morgan Bagley, who kept Clanton in sight throughout the distance in his first-ever start at Berlin…. Eckert outgunned Josh Richards for the lead at the start of the fourth heat and never looked back en route to the checkered flag. The Pennsylvanian beat the West Virginia driver to the finish line by 1.457 seconds…

Bluegrass Bandit on a roll

7:20 p.m. – Darrell Lanigan shined in Ohlins Shocks Time Trials, ripping off a lap of 16.615 seconds that was the overall fastest of the two-group session.

Not only was Lanigan the only driver to break into the 16-second bracket, he was also the quickest by over four-tenths of a second, easily besting Josh Richards’s second-fastest lap of 17.028 seconds in Group ‘B.’ It was his fifth WoO LMS fast-time honor of 2013.

Ohio’s Matt Miller was the fastest qualifier in Group ‘A,’ turning a lap of 17.117 seconds in his first WoO LMS appearance of the season.

6:25 p.m. – Darrell Lanigan, who won last year’s WoO LMS event at Berlin, came out of the box fast tonight, turning a lap of 16.035 seconds in practice to lead all drivers on the speed chart.

Of the five fastest drivers in hot laps, only Richards did not compete in last year’s inaugural WoO LMS event.

Ohlins Shocks Time Trials will begin shortly after the completion of practice for UMP Modifieds and Street Stocks.

5:40 p.m. – With the drivers’ meeting complete, the 33 cars signed in for tonight’s action are firing up in preparation for hot laps at 6 p.m.

After last night’s qualifying program was canceled because track officials determined that the two days of rain leading into the weekend had left too much moisture in the dirt surface to allow safe and competitive racing, track-prep guru Jeremie Corcoran,  spent the remainder of the day turning countless laps around the speedway with a grader and roller to dry and pack the surface. Today the clay appears to be packed down hard and is clearly not as soft as it was yesterday.

Due to the weekend being condensed to one night of action, tonight’s scheduled 100-lap/$20,000-to-win WoO LMS A-Main was restructured to a 75-lap headliner with a $15,000 first-place prize. Berlin’s event contract with the WoO LMS stipulated that the race purse would be reduced if Friday night’s qualifying program was lost due to the track’s loss of a second day of revenue.