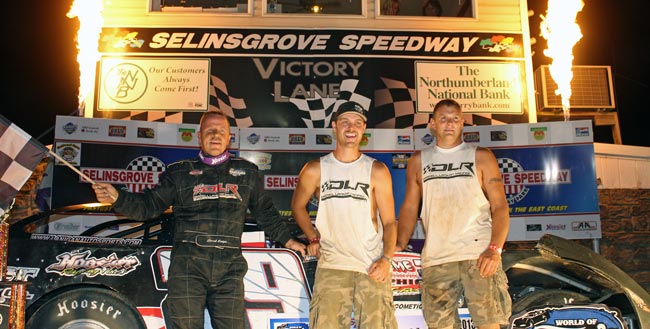 Twenty-four hours after dropping out of the weekend’s opening event due to an overheating engine, Lanigan stormed forward from the fourth starting spot to take the lead from Rick Eckert of York, Pa., on lap 14 and never looked back en route to his series-leading 10th win of the season.

Lanigan, 43, was never challenged once in command, cruising to the checkered flag in a race that ran non-stop following an opening-lap caution flag. He beat the 47-year-old Eckert to the finish line by 2.859 seconds to secure a paycheck worth $10,650.

Matt Cochran, 20, of Williamsport, Pa., defended the honor of Selinsgrove’s regular Late Model competitors with a strong third-place finish in just the second WoO LMS A-Main start of his career. He drove a Rocket car that he purchased earlier this summer from Lanigan, who assembles machines for several customers as part of his ‘Club 29’ business.

Josh Richards of Shinnston, W.Va., maintained control of the WoO LMS points battle with a fourth-place finish after starting 10th and Shane Clanton of Zebulon, Ga., started and finished fifth. The weekend ended with Richards leading Clanton by 96 points with seven events remaining on the 2013 schedule.

Lanigan saw his hopes for a second straight WoO LMS title take a major hit on Saturday night when a hot engine forced him to slow moments after he lost the lead to Gregg Satterlee of Rochester Mills, Pa., on lap 17 of the 40-lap A-Main. He tried to continue after making a pit stop but retired shortly thereafter, pushing his deficit to Richards in the standings to triple digits.

Disappointed but undaunted, Lanigan and his crew went to work on Sunday to rectify their overheating problem. He knew his Rocket machine would be tough to beat on the sprawling half-mile oval if its Cornett engine didn’t heat up past the 300-degree mark like it did on Saturday, so keeping the powerplant cool was his number one priority.

“We just changed some stuff on it – the oil cooler and radiator again – to try and make it run cooler,” said Lanigan, who sits third in the points standings. “I think we found the problem in it.”

Indeed, Lanigan experienced no dire overheating while driving away from the pack on Sunday night. He built an edge of nearly a straightaway over Eckert, who started on the outside pole and led laps 1-13 before occupying second place for the final 37 circuits.

“I definitely had (the overheating) in the back of my mind,” said Lanigan, whose alltime-series-best 51st career win pushed him over the $200,000 mark in earnings for the 2013 season. “But I was keeping my eye on the gauge and it was staying pretty steady so I knew we was alright then.

“The car was phenomenal. We learned some things on tires last night that helped us tonight. There at the end the car was on a rail – I thought (the track surface) rubbered up actually.

“The car was so good all weekend,” he added. “I wish we could’ve stayed in (the A-Main) last night. I think we would’ve had that one too.”

Lanigan’s crewmen Jason Jameson and Adam Logan did pull off the hood of their car and pour water on the engine to cool it down before Lanigan reached Victory Lane, but that was just a precautionary measure.

Eckert, meanwhile, watched Lanigan’s post-race celebration from about 100 feet away. His fifth runner-up finish of the 2013 WoO LMS campaign left him slightly frustrated, but he managed to put on a happy face because his run came with many of his family members and fans in attendance at a track less than an hour-and-a-half from his home.

“That’s just about the story of our whole year,” Eckert said when asked to comment on his bridesmaid run. “We get close to winning, but we just can’t win.

“We were a little too soft on tire. I couldn’t maneuver very good in traffic – and traffic was pretty tough.”

Eckert was glad to get the chance to compete in a WoO LMS weekend at Selinsgrove, the track where he ran the first dirt Late Model race of his career nearly three decades ago.

“It was great to come back here and great to see all the people come out,” said Eckert, who has one WoO LMS triumph this season. “Hopefully (Selinsgrove promoter) Charlie (Paige) keeps doing this. This is a cool deal this late in the year.”

Cochran drew plenty of attention with his visit to the Victory Lane ceremonies as the race’s surprise third-place finisher. A feature winner just four times in his six-year dirt Late Model career – twice at Selinsgrove, twice at Clinton County Speedway in Lock Haven, Pa. – he turned heads with his performance.

After starting sixth and finding himself still running in the same spot at the race’s halfway mark, Cochran came alive. He reached fourth place on lap 31 and then dogged Richards until finally slipping past the two-time WoO LMS champion for third exiting turn four on lap 48.

“I can’t believe I was going as far forward as I was,” said Cochran, who used a hard tire compound that made his car faster the longer the race ran under green-flag conditions. “But the car was working excellent.”

Cochran credited his burgeoning relationship with Lanigan for making his career-highlight outing possible. He proudly accepted a congratulatory handshake from Lanigan after his post-race interview.

“He definitely is running well up here,” Lanigan said of Cochran. “He calls me about once a week and I help him out. I put him on our program and he runs well.

“I enjoy watching them guys (that are part of ‘Club 29’) be able to do that. He helps me sell parts and cars up here so he helps me out too.”

Dan Stone of Thompson, Pa., finished sixth after running in the top five for more than half the distance and Satterlee placed a quiet seventh after winning the previous evening. Tim McCreadie of Watertown, N.Y., started and finished eighth, WoO LMS rookie Morgan Bagley of Longview, Texas, was ninth and eight-time Selinsgrove champion Jeff Rine of Danville, Pa., advanced from the 17th starting spot to round out the top 10.

The race’s only caution flag flew on the opening lap when Chub Frank of Bear Lake, Pa., slowed on the backstretch with a broken rearend.

Thirty-six cars were entered in the program, which was run under a threat of rain for the second consecutive night.

Clanton’s lap of 19.244 seconds in Group ‘A’ was the quickest overall of the qualifying session. He earned his third fast-time honor of 2013.

The WoO LMS will be off for a weekend – during which eight of the tour’s 11 regulars plan to compete in the DIRTcar UMP-sanctioned World 100 on Sept. 5-7 at Eldora Speedway in Rossburg, Ohio – before returning to action with a doubleheader in the Midwest. The circuit will visit Belle-Clair Speedway in Belleville, Ill., on Fri., Sept. 13, and Federated Auto Parts Raceway at I-55 in Pevely, Mo., on Sat., Sept. 14.

Twenty-four hours after dropping out of the weekend’s opening event due to an overheating engine, Lanigan stormed forward from the fourth starting spot to take the lead from Rick Eckert on lap 14 and never looked back en route to his series-leading 10th win of the season.

Eckert settled for second place in a race that ran non-stop after an opening-lap caution flag. Matt Cochran, a Selinsgrove regular who runs a car he purchased from Lanigan, recorded a career-best WoO LMS finish of third after passing Josh Richards with two laps remaining. Richards finished fourth and Shane Clanton was fifth.

8:55 p.m. – After the completion of the two B-Mains — Jeff Rine won the first over Bub McCool and Jim Yoder, and Dylan Yoder (Jim’s son) won the second over Kenny Pettyjohn and Clint Smith — teams are making final preparations for the 50-lap National Open. The eight-minute horn to line up the event has already been blown.

8:35 p.m. – With Selinsgrove Speedway being the first track at which Rick Eckert drove a dirt Late Model nearly three decades ago and less than 90 minutes north of his home in York, Pa., there’s no doubt he has plenty of fans here tonight. That became plainly evident when he drew the outside pole starting spot for the 50-lap A-Main, producing a hardy roar from the attendees up in the stands.

Eckert has six career wins at Selinsgrove, including a special-event score in each of the last two seasons.

WoO LMS rookie Eric Wells, who campaigns a Team Zero by Bloomquist car like his traveling partner Eckert, will start from the pole position. He’s hoping he’s able to parlay his spot into a solid finish; he’s been in the redraw for three straight nights but wasn’t able to finish well on either Friday or Saturday.

The twin 12-lap B-Mains are now being run. Upon the conclusion of the last-chance events, the WoO LMS 50-lapper will be next to hit the track.

8:15 p.m. – The most intriguing moment of tonight’s heat action came in the fourth and final qualifier when defending WoO LMS champ Darrell Lanigan shared the front row for the start with polesitter Matt Cochran, a 20-year-old Selinsgrove regular from Williamsport, Pa., who just one month joined Lanigan’s ‘Club 29’ gang by buying a Rocket car assembled by the Kentucky star.

Cochran, whose performance has definitively picked up since he became a customer of Lanigan’s, was deemed by officials to have started the heat too early at the initial green flag and was thus penalized back to the third spot for the restart. Lanigan then went on to win the heat over Cochran, who showed poise by recovering from the penalty to pass Chub Frank for second and earn his way into the feature redraw.

The earlier heats were won by Shane Clanton, Tim McCreadie (by just 0.140 of a second over Rick Eckert) and Coleby Frye.

The most significant incident of the prelims came durng the fourth heat when Jamie Lathroum, who won a WoO LMS A-Main in 2009 at Delaware International Speedway, slapped the wall off turn four and limped into the pit area. It marked the second time Lathroum has crashed at Selinsgrove in as many visits this season.

7:35 p.m. – Shane Clanton has quickly established himself as a driver to beat in tonight’s 50-lap National Open after registering the overall fastest lap in Ohlins Shocks Time Trials (19.244 seconds in Group ‘A’) and winning the first of four 10-lap heat races.

Coleby Frye, a three-time Selinsgrove winner in ’13 who is behind the wheel of his family-owned No. F1 tonight after his No. 32F machine was sidelined by mechanical trouble last night, was the fastest qualifier in Group ‘B’ at 19.477 seconds.

With rain a threat, officials had the first heat on the track moments after qualifying was completed.

7 p.m. – Aiming to rebound from a rare DNF last night due to overheating woes, Darrell Lanigan came out of the gate tonight by topping the speed chart in practice with a lap of 19.414 seconds.

Cars are now rolling onto the line for Ohlins Shocks Time Trials, which will begin shortly.

Mars had originally planned to compete in both ends of the Selinsgrove doubleheader, but his arrival was delayed one day because his brother’s girlfriend underwent surgery on Friday.

It’s another sultry day in central Pennsylvania, with hot, muggy conditions prevailing. The threat of thunderstorms remains, but so far radar indicates that the rain is staying away from Selinsgrove. Officials are hopeful that the weather will continue to hold out, but they are planning to run tonight’s show off in a rapid-fire manner to avoid any potential problems with Mother Nature.