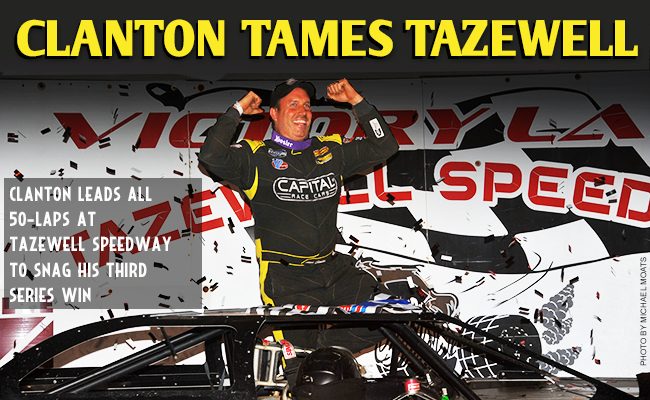 Jimmy Owens finished one spot shy of sweeping the night

TAZEWELL, T.N.—June 2, 2017— Shane Clanton proved he is bad fast and fearless as the 31-degree banking at Tazewell Speedway didn’t hold him back from leading all 50-laps of the Ray Varner 50 in order to land his third Series win of the season.

“We were just buying our time waiting for the checker flag to come out,” said Clanton. “Our car has been working real good the past month and that just shows what hard work that Penske and Ronny Crooks, Aaron and Nick and all of them guys have done to get me back on top here.”

Clanton’s win broke the two-year streak of Tennessee top-guns overtaking the Outlaws at the third-mile but Jimmy Owens was looking to carry on the tradition. Owens landed fast-time and a heat win before unfortunately drawing a sixth place start in the feature. After steadily passing three cars, Owens passed Ricky Weiss on lap 40 for the second position. After an unsuccessful effort to reel in the lap-leader, Owens finished in second and Weiss rounded out the podium

“We had an awesome race car tonight the track just kind of locked down a little quicker than we needed it to,” said Owens. “I would’ve liked to see what we had for Shane there if we could’ve gotten to race a little more but he had a good car. He’s been good for a while so congratulations to Shane and his crew and I’m glad that we get to come home with a good second place finish.”

Owens wish to take on Clanton may be granted sooner than later as he follows the Outlaws to Senoia Raceway for the third annual Billy Clanton Classic on June 3. The Tennessee-native will be sporting a different look during the 50-lap $10,025-to-win event as he will sit behind the wheel of Tod Darda’s no. 91. Yet, Clanton will be on the gas trying to defend his home turf and a title he has held for the past two years.

For complete results from the World of Outlaws Craftsman Late Model Series event at Tazewell Speedway visit the results page.