Clanton Cruises To Another Volusia Victory 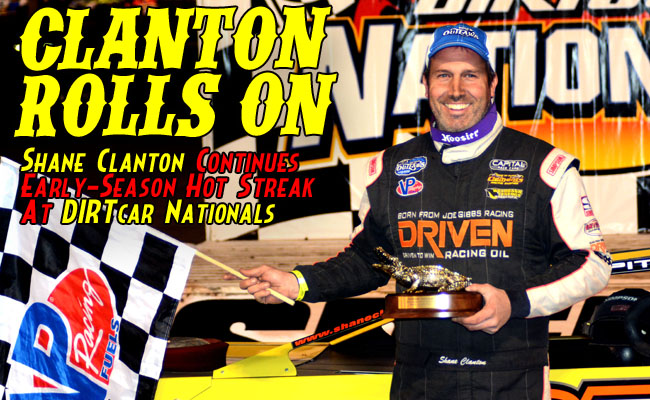 Clanton, the 39-year-old World of Outlaws Late Model Series veteran, led every lap of Thursday’s 50-lap race to earn his second WoO LMS victory of the season and his second victory during the 2015 version of Volusia’s six-day stretch of Super Late Model racing.

“This shows how hard we worked over the winter to get where we’re at,” said Clanton, whose only opposition came in the form of brief challenges from runner-up Don O’Neal of Martinsville, Ind., and third-place finisher Jonathan Davenport of Blairsville, Ga., following restarts. “This sport is grueling at times and great at others. Right now it’s just great to me.”

Indeed, 2015 has been more than kind to Clanton thus far. Following a disappointing 2014 campaign, Clanton has been fantastic in his Weldbank Energy-sponsored Capital Race Car this season with top-five finishes in all five WoO LMS events and a DIRTcar-sanctioned victory during Monday’s DIRTcar Nationals opener to go along with his two WoO LMS triumphs. The early-season hot streak has landed Clanton firmly atop the WoO LMS standings by 64 points as he chases his first series title.

“It feels great to know what it feels like to win a lot again,” said Clanton, who ended a 66-race WoO LMS winless streak with his first victory of the year at Screven Motor Speedway in Sylvania, Ga., on Feb. 7. “It’s been a long struggle to get where we’re at, but we work hard and never give up.”

O’Neal crossed the finish line well behind Clanton in the second spot, with Davenport farther back in third. Kent Robinson of Bloomington, Ind., advanced from his 19th starting spot to finish fourth with 12th-starting Earl Pearson Jr. of Jacksonville, Fla., rounding out the top five in a race slowed by five cautions, all for either slowing cars or single-car spins.

O’Neal gave Clanton his biggest challenge following a lap-29 restart, using the high side to nearly pull even with the leader exiting turn two. But O’Neal’s bid came up empty and after a similar challenge following the race’s final restart on lap 33, Clanton pulled to more than a five-second advantage in the closing laps.

O’Neal fell short of claiming his first DIRTcar Nationals victory since 2011, but the 50-year-old racer was boosted by the strong performance.

“I couldn’t run it any harder than I ran it up there them couple of laps,” said O’Neal, who pilots a Peak Antifreeze and Motor Oil-sponsored Barry Wright Race Car for Clint Bowyer Racing. I realized when I couldn’t get buy him I was just getting the tires hot, so I had to move back down.

“This is a lot better than we’ve been doing. We just lacked a little bit there when (the track surface) slicked off. But we’ve got something to work with now so maybe we can have another good couple of nights.”

Davenport ran second for much of the race’s first half, but he wasn’t able to keep pace with Clanton and eventually allowed O’Neal to slip passed him following a lap-16 restart. With his third-place result, the 31-year-old Davenport recorded the best DIRTcar Nationals finish of his career in his Lee Roy and Kevin Rumley-owned Longhorn Chassis.

“We’re finally getting a little better here,” said Davenport, whose previous best DIRTcar Nationals finish was a fifth-place result in 2011. “I ain’t ever been any good at this place when it comes feature time. I’ve won a bunch of heat races, but as soon as it gets slick I struggle.

“Kevin’s been working on the car and getting it really good and maybe my driving’s getting a little better. Maybe tomorrow we’ll move up and try to get a win.”

Dale McDowell of Chickamauga, Ga., was sixth in Thursday’s final rundown after climbing as high as third midway through the race. Brandon Sheppard of New Berlin, Ill., advanced from his 15th starting spot to finish seventh, while three-time and defending WoO LMS champion Darrell Lanigan of Union, Ky., charged from 24th to eighth.

Jimmy Owens of Newport, Tenn., recovered to finish ninth after having to start from the tail of the field because he switched to a backup car when his primary machine suffered mechanical woes during his heat race victory. He was followed at the finish by 18th-starting Steve Francis of Union, Ky.

A number of drivers charged into contention only to fade late in the race. Three-time WoO LMS champion Josh Richards of Shinnston, W.Va., quickly advanced from his 10th starting spot into the top five, but faded during the race’s middle portions. A pit stop under a lap-26 caution dropped him to a 19th-place finish. Tim McCreadie of Watertown, N.Y., advanced into the top five from his 20th starting spot, but a lap-33 spin relegated the former series champion to a 15th at the checkereds.