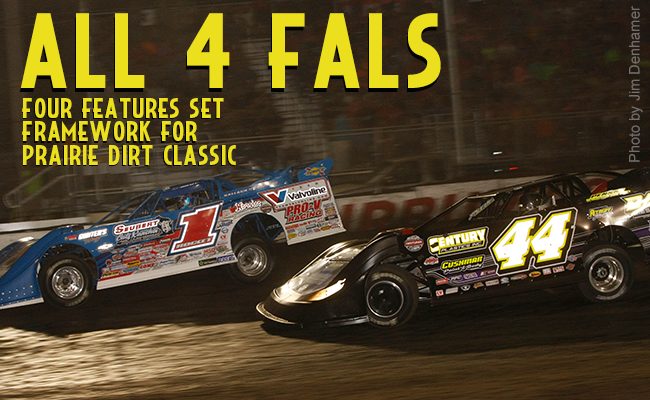 FAIRBURY, IL— July 28, 2017— One of the most anticipated Late Model events in the country kicked off Friday evening at Fairbury American Legion Speedway with the running of the 28th annual Prairie Dirt Classic.

Friday’s portion of the two-day show topped the charts of the 2017 season with the most cars entered in a World of Outlaws Craftsman® Late Model Series event with 65 Late Models in attendance. Late Model drivers from across the nation collided on the Fairbury, IL stage in hopes of walking away with a portion of the $93,000 purse.

Friday’s portion of the two-day show set the stage for the 100-lap main event on Saturday with four showdown features taking place. The top four drivers from each showdown secured their position in the Prairie Dirt Classic with the top two finishers headed to the redraw.

On Saturday, two Last Chance Showdowns will take place allowing six additional drivers to fight for their spot in the main event alongside four provisional positions to create a 26-car field for the 100-lap program.

Devin Moran was a man on a mission during the first of four showdown features. He led every lap of the 25-lap feature over Jason Feger who was relentlessly trying to reel the Rookie of the Year contender in. By the time the checker flag fell, Moran had created 4.703-seconds between him and the rest of the field. Moran’s dominating performance proved he remained the fastest car on the track after grabbing quick-time earlier in the day.

“Tomorrow night is going to be a long race and I’m not sure they will have the track the same,” said Moran. “I think we have to get a little better but I was pretty decent. We’ll just go back there and keep working on it.”

Shane Clanton and Shannon Babb started in the front row of the Pontiac RV showdown where they ran side-by-side around the track in what looked like was going to shape up to a great battle for 25-laps. Unfortunately for Babb, he climbed the wall in turn two on lap two and was forced to retire from the race.

Tyler Erb was next to battle Clanton before he followed in Babb’s misfortune ultimately leaving the race due to mechanical failures. Clanton then controlled the feature for the remainder of the event over a battle for second between Ryan Unzicker and Brian Shriey.

“That was a work out right there,” said Clanton. “Our car is as good as it is … I hope tomorrow night we have a good enough car to last 100 laps here. 100 laps is a long time around here.”

Dennis Erb Jr. wheeled his way from a 10th place start to claim the final transfer position from the second 25-lap feature.

Sheppard patiently waited to make his move on Madden and on lap-18 he saw the opportunity to slide pass the race long leader on the high side of the track nearly clipping the nose of the no.44 machine in the process.

“The track was a little bit treacherous up there but you know it’s FALS, if you can get up there to make it happen, you can make it happen.” said Sheppard. “Hats off to both Chris’ they did a good job and had some smooth lines running. They also probably don’t have as much stuff tore up as I do but we got it done and we got in the redraw. That’s the biggest thing. Getting in the redraw.”

With only four laps remaining, Pierce was able to pass Madden for the final spot in the redraw. Madden ended up finishing third and Simpson fourth.

Mike Marlar led all 25-laps of the qualifying feature despite one mistake that almost cost him his victory. On lap 17, Marlar jumped the cushion ultimately losing his momentum on the backstretch. It was then Don O’Neal who paid the price as he was hit from behind bringing out the caution on the same lap.

“I really got lucky there,” said Marlar. “I don’t know how everyone didn’t pass me. It looks like a cost O’Neal to get his car tore up and I hate that but I just got over that edge… We have a stellar field here with some of the best guys in the country so it’s a tough deal to get in from the heat race. We should have an awesome race tomorrow.”

Rick Eckert had been steadily running second behind Marlar while fending off multiple charges from Tim McCreadie. On lap 20, McCreadie was able to pass Eckert followed by Jimmy Owens and Chris Ferguson who also found their way around the No. 7 by the time the checkers fell.

To see behind the scenes coverage and live updates on the 28th annual Prairie Dirt Classic follow the World of Outlaws Craftsman Late Model Series on Facebook and Twitter or listen to live audio for free available on dirtvision.com.