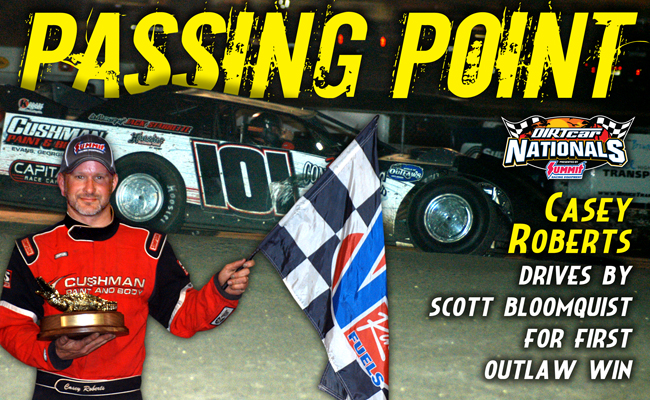 But when the checkered flag flew on the fourth race – Thursday night’s 50-lap World of Outlaws Late Model Series A-Main – the unheralded 36-year-old driver from Toccoa, Ga., was first across the finish line.

Roberts pulled off one of the biggest upsets in the history of the DIRTcar Nationals by Summit, passing dirt-track legend Scott Bloomquist of Mooresburg, Tenn., coming to the white flag to become the mid-winter motorsports meet’s third first-time dirt Late Model winner in four events.

Refusing to concede after losing the lead to Bloomquist on lap 31, Roberts patiently stuck to the bottom of the half-mile oval and slipped ahead of Wednesday night’s DIRTcar Late Model feature victor to gain command as lap 49 was scored. The Peach State racer then staved off a last-ditch bid by Bloomquist to score his first-ever WoO LMS triumph by a mere. 0.185 of a second.

Roberts’s dramatic drive to a win worth $10,550 ignited the large Volusia crowd, which gave the consummate underdog a rousing welcome when he emerged from his Cushman Motorsports Capital Race Car in Victory Lane.

“I’m pretty much a no-name or whatever,” Roberts modestly said while standing on the homestretch stage following the race. “I guess everybody thinks it’s good to see guys like me win.

“I’ll tell ‘ya, I’m just blessed to be here. It feels like it’s not even really happening.”

After winning his first career WoO LMS heat race earlier in the program, Roberts started from the pole position in the first of three scheduled 50-lappers for the national tour during the DIRTcar Nationals by Summit. But he was outgunned for the lead at the initial green flag by front-row mate Brady Smith of Solon Springs, Wis., setting the stage for a difficult road to victory for the two-time Ultimate Super Late Model Series champion.

“We had a gameplan, me and (Capital Race Cars builder) Marshall (Green) and all the guys, and stuck to it,” said Roberts. “The 2 (Smith) got out front there and I just kept riding. I didn’t want to get my tires hot and tried to take care of my tires for the end.”

Eventually Roberts “started coming back” to Smith, and on lap 15 Roberts slid underneath Smith to take the lead. Roberts initially edged away from the pack, but after the race’s four caution flags flew in rapid-fire fashion – on laps 20, 22, 24 and 28 – he watched Bloomquist use the outside lane to sail into the top spot on lap 31.

On most occasions, a Bloomquist move into the lead during the second half of a race means the rest of the field is running for second. But this wasn’t a normal situation.

“Scott come up through there and gosh, whenever he passed us, I was like, ‘Dang, we might run second,'” said Roberts. “But I wasn’t gonna go down without a fight.”

With the A-Main running caution-free to the finish, the low-riding Roberts slowly inched toward Bloomquist’s two-race-old Sweet/Bloomquist car. He challenged Bloomquist on lap 43 only to fall several car lengths back on lap 45 while negotiating lapped traffic; moments later, Roberts broke free of slower cars and again closed in on Bloomquist.

On lap 48 Roberts surged to the inside of Bloomquist in turns one and two and stayed alongside the leader down the backstretch. After rounding turns three and four, Roberts was in the lead with the white flag flying – and less than 20 seconds later, the race was his.

“We definitely could drive and rotate around the bottom real nice,” said Roberts. “That was really the key to the win.”

Bloomquist, 50, conceded that Roberts’s mastery of the inside groove was the difference.

“I thought the racetrack would move up and you’d have to run the middle and all over it, but that bottom stayed a lot longer than I expected,” said Bloomquist, who started sixth. “He ran a great race. It looked like he just stuck to the bottom. Tonight, that’s where it was at.”

Outdueling a Hall of Famer like Bloomquist was an unforgettable accomplishment for Roberts, a low-key sort who displayed surprisingly little outward emotion after the race.

“To run with Scott like that, with as much as he’s done in our sport – it ranks definitely at the top of the wins that I have,” said Roberts, whose wife, Cathy, and children Brynn, 15, and Mason, 10, were unfortunately not in attendance at Volusia. “I can’t thank God enough for blessing me with all the fine people around me.”

Roberts’s car owner, Jimmy Cushman, was a bit more demonstrative in his post-race actions. The longtime team owner was teary-eyed in Victory Lane, overjoyed by the magnitude of his driver’s triumph.

“I’ve always dreamed of winning an Outlaw race,” said Cushman, who, along with his wife Ann, has fielded cars for Roberts for the last 10 years. “It’s come true.”

Brandon Sheppard of New Berlin, Ill., finished sixth and took over the WoO LMS points lead for the first time in his young career. Steve Francis of Ashland, Ky., faded to seventh after briefly challenging Roberts for second early in the distance. Darrell Lanigan of Union, Ky., rallied to finish eighth after being forced to the rear of the field on lap 24 by contact with Smith that sent him spinning in turn four. Rick Eckert of York, Pa., and Shane Clanton of Zebulon, Ga., rounded out the top 10.

Wrapping around the lap-24 caution flag for Lanigan’s problem were slowdowns on lap 20 for third-starter Brian Shirley of Chatham, Ill., who stopped in turn three; lap 22 for Kyle Bronson of Tampa, Fla., who slowed after climbing the homestretch wall; and lap 28 for a turn-two spin by Chub Frank of Bear Lake, Pa.

With 45 cars were entered in the evening’s action, Ohlins Shocks Time Trials were split into ‘A’ and ‘B’ groups. The first half competed for starting positions in heats one and two and the second half racied against the clock to align heats three and four.

Billy Moyer of Batesville, Ark., turned a lap of 15.791 seconds in Group ‘A’ that was the quickest overall of the night. It was his first WoO LMS fast-time honor of 2014 and the 19th of his career.

Heat winners were won by Roberts, Satterlee, Bloomquist and Shirley. Vic Coffey of Caledonia, N.Y., and Eckert captured the B-Mains.

The DIRTcar Nationals Presented by Summit continue on Friday (Feb. 21) and Saturday (Feb. 22) with WoO LMS programs headlined by 50-lap, $10,000-to-win A-Mains. The Super DIRTcar Series for Big-Block Modifieds will also be part of both shows. Race time is 7:30 both evenings.

A 50-lap A-Main paying $10,000 to win will headline tonight’s WoO LMS action, which fans can watch live by purchasing a DIRTcar Nationals video subscription at www.DIRTVision.com. Identical WoO LMS 50-lappers are also scheduled for Friday and Saturday to close out the 2014 DIRTcar Nationals by Summit.

10:10 p.m. – Georgia’s Casey Roberts pulled off one of the biggest upsets in the history of the DIRTcar Nationals by Summit, passing dirt-track legend Scott Bloomquist coming to the white flag to win the 50-lap WoO LMS A-Main.

Refusing to concede after losing the lead to Bloomquist on lap 31, Roberts patiently stuck to the bottom of the half-mile oval and slipped ahead of Wednesday night’s DIRTcar Late Model feature winner to gain command as lap 49 was scored. The Peach State racer then staved off a last-ditch bid by Bloomquist to score his first-ever WoO LMS triumph by a mere. 0.185 of a second.

Dale McDowell charged forward for the second straight night, advancing from the 15th starting spot to place third. John Blankenship and Gregg Satterlee finished fourth and fifth, respectively, after spending the final laps in a dogfight for position.

9:10 p.m. – Vic Coffey and Rick Eckert were victorious in the 12-lap B-Mains, which completed qualifying for the 50-lap A-Main. Shane Clanton and Chub Frank also transferred through the first B-Main, while Eric Wells and Kenny Pettyjohn made the cut in the second last-chance event.

Clint Smith is eligible for a WoO LMS emergency provisional to start 25th. He will have to forfeit his start money ($700) if he accepts the provisional.

The second of two DIRTcar Big-Block Modified consolations is currently on the track, with the WoO LMS A-Main to follow.

8:15 p.m. –Casey Roberts, Gregg Satterlee, Scott Bloomquist and Brian Shirley were victorious in the four 10-lap heat races…. Roberts won the first prelim over fast-timer Billy Moyer, whose car sustained right-rear bodywork damage from a hit he received while the field was slowing for a caution flag on the opening lap. The caution was thrown for Frankie Heckenast Jr., who slid over the cushion in turns one and two…. John Blankenship slid by Shane Clanton on the last lap to grab the final transfer spot in the first heat…. Satterlee controlled the second heat, outdistancing an all-Florida battle for second between Kyle Bronson and Monday-night DIRTcar Late Model winner Ivedent Lloyd Jr. Bronson held off Lloyd to finish second and make the redraw for his first-ever WoO LMS A-Main start…. Coming off a win in Wednesday night’s DIRTcar Late Model A-Main, Bloomquist absolutely dominated the third heat. He beat Steve Francis to the finish line by a commanding margin of 6.482 seconds – over a full straightaway…. Shirley (pictured below racing with Mike Marlar) cruised to the checkered flag in Heat 4, beating Brady Smith by 1.098 seconds. Smith overtook Marlar late in the distance to sneak into a feature redraw spot…. Clint Smith ran team owner Todd Wood’s backup car in the fourth heat after his primary machine was sidelined by terminal mechanical trouble during time trials. He finished eighth….

Click here for full results from the heat races….

7:40 p.m. – Billy Moyer found the quick way around the half-mile once again in Ohlins Shocks Time Trials, turning a lap of 15.791 seconds in Group ‘A’ to earn the overall fast-time honor.

Scott Bloomquist, meanwhile, was fastest in Group ‘B’ with a lap of 15.880 seconds.

Moyer, Bloomquist, Kyle Bronson and Brian Shirley will start from the pole position in tonight’s four heat races, which have already begun.

6:25 p.m. – With practice complete (Scott Bloomquist turned the fastest lap at 16.343 seconds), Ohlins Shocks Time Trials will be lined up momentarily. The qualifying will be split into two groups, with Group ‘A’ results lining up heats one and two and Group ‘B’ results used to align heats three and four.

The top four finishers from each 10-lap heat will move on to the 50-lap A-Main, with the top two in each prelim redrawing for the first eight starting spots in the headliner. Two 12-lap B-Mains will transfer three more drivers from each and two provisionals will round out the starting field.

Brady Smith enters the first of three WoO LMS events this week sitting atop the national tour’s points standings. If his success continues (he had a win, a second and a third last weekend at Bubba Raceway Park and started the DCN with a pair of top-three finishes) and he’s able to make the necessary sponsorship and manpower arrangements, he said he might take a shot at following the WoO LMS this season.