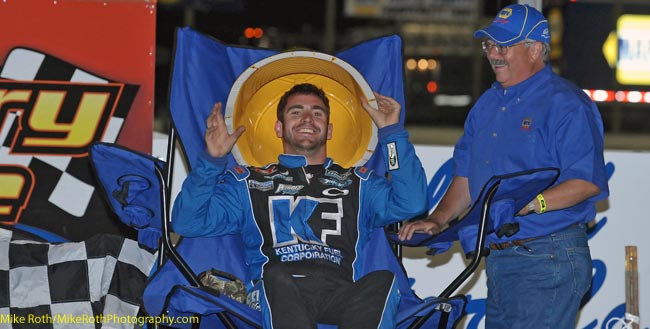 The 23-year-old superstar vaulted from the fourth starting to the lead at the initial green flag, capping the explosion by splitting front-row starters Clint Smith of Senoia, Ga., and Rick Eckert of York, Pa., rounding turns three and four. He turned back a late challenge from Brian Birkhofer of Muscatine, Iowa, to register his third victory of the 2011 World of Outlaws Late Model Series season and first-ever at the Queensland family’s three-eighths-mile in southern Minnesota.

“It’s just awesome to finally get a win here at Deer Creek,” said Richards, whose $11,850 in earnings included a $1,000 bonus from NAPA Auto Parts. “These guys do a phenomenal job with this place. It’s one of my favorite tracks to come to every year.”

Driving his father Mark’s Seubert Calf Ranches/Kentucky Fuel Corporation Rocket No. 1, Richards paced the entire distance in front of a standing-room-only crowd that turned out for the prestigious co-promoted by the Blooming Prairie (Minn.) Lions Club and Deer Creek Speedway to raise money for Jaycee and Lions projects. The two-time defending WoO LMS champion was victorious for the third time in his last six starts on the national tour.
{vimeo}26414785{/vimeo}
Birkhofer, 39, passed Eckert for second on a lap-16 restart and drew close to Richards in the final circuits but settled for the runner-up spot in his MB Customs car. The two-time Gopher 50 winner crossed the finish line 0.537 of a second behind Richards.

Defending Gopher 50 champ Tim McCreadie of Watertown, N.Y., finished nearly two seconds behind Birkhofer in third after charging forward from the 12th starting spot in the Sweeteners Plus Victory Circle mount. He matched his best finish of the season on the WoO LMS.

Chad Simpson of Mt. Vernon, Iowa, recorded a career-best WoO LMS finish of fourth – and earned the $500 ‘Bonus Bucks’ cash for being the highest-finishing driver who hasn’t won an A-Main on the series and isn’t ranked among the top 12 in the points standings – and ninth-starter Jimmy Mars of Menomonie, Wis., recovered from a slow start that dropped him out of the top 10 to place fifth.

Richards, who made his NASCAR Camping World Truck Series debut for Kyle Busch Motorsports on July 7 at Kentucky Speedway, used his head-turning move on the opening lap to propel himself to the checkered flag in the opening event of the WoO LMS ‘Wild West Tour.’

“The car just took off on the start and I couldn’t waste the momentum,” said Richards, who pushed his WoO LMS-leading career win total since 2004 to 31. “The track was getting drier and drier and Brian was on harder tires than we were, so I had to use every bit of the brown (moisture) that I could. I couldn’t really stick in the bottom too well so I just tried to use all of the track and get through there the best I could.

“If we would’ve hit it wrong just a little bit, Brian no doubt would’ve won the race.”

Birkhofer appeared to be in position to steal the race from Richards when he ducked underneath the leader in turns one and two with two laps remaining, but Richards managed to overtake the slower Ron Davies of Warren, Pa., entering turn three and hold on for one more tense circuit.

“It was a fun race,” said Birkhofer, who started third. “The lapped traffic was what it was. I knew Josh was gonna slide Davies, and when he got by him I got all screwed up for a second behind him and that probably cost me.”

The 37-year-old McCreadie, meanwhile, was upbeat despite seeing his year-long winless streak reach 35 races. He reached third place with a lap-36 pass of Simpson but never caught a caution flag that might have given him a shot at the leaders.

“To be second to these two guys in the slick like this – especially where we started – I’m happy,” said McCreadie, who last victory on the WoO LMS came in the 2010 Gopher at Deer Creek. “Since I got in this (Victory Circle) car (in mid-May) we’ve gone forward. It’s a matter of getting qualified a little better through a heat. It just seems like, for me personally, when you draw a bad (time-trial) pill you can’t overcome it like you could a few years ago.

“I’m cautiously optimistic,” he added when asked about his recent improvement. “We’re still making gains. Hopefully these other guys like Josh are where they’re gonna be and we can keep gaining and gaining. I know there’s more left in this car if we can just tweak it to find it.”

Chris Simpson of Mt. Vernon, Iowa, finished sixth, falling just short of his brother Chad in the final rundown. Eckert faded to seventh at the finish after starting from the pole position – causing his WoO LMS points lead to shrink to 26 points over Richards – while Chub Frank of Bear Lake, Pa., was eighth (from the 19th starting spot), WoO LMS Rookie of the Year points leader Pat Doar of New Richmond, Wis., was ninth and Shane Clanton of Fayetteville, Ga., climbed from the 17th starting spot to 10th.

Two caution flags slowed the event – for spins by John Lobb of Frewsburg, N.Y., on lap six and Nick Herrick of Kenyon, Minn., on lap 16.

With 37 cars on hand, Austin Hubbard of Seaford, Del., was quickest in Ohlins Shocks Time Trials with a lap of 14.365 seconds. It was his second fast-time of 2011 and the sixth of his career on the WoO LMS.

Heat winners were Hubbard, Clint Smith, Birkhofer and Doar; each received a $100 bonus from NAPA Auto Parts. The B-Mains were captured by Clanton and Tyler Breuning of Decorah, Iowa.