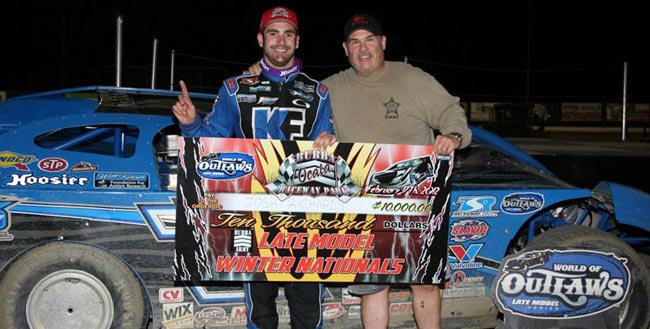 Richards, 23, of Shinnston, W.Va., made WoO LMS history in the process, becoming the national tour’s alltime winningest driver. He won for the 38th time in his career, moving him out of tie for first with Billy Moyer of Batesville, Ark., on the checkered flag list that includes races run in the modern era (2004-present) and the original 1988-89 seasons contested under late WoO Sprint Car Series founder Ted Johnson.

“That’s really crazy,” said Richards, who earned $10,100 for his first win of the 2012 WoO LMS campaign. “To look back at what we’ve accomplished (since 2004) is phenomenal. To win that many races against these guys, I couldn’t be more proud.”

Richards’s milestone score appeared headed toward a repeat of Thursday night’s Winter Nationals opener, however, when Union, Ky.’s Lanigan, who started outside of Richards on the front row for the second consecutive night, surged into the lead at the initial green flag. But Richards turned up the wick on his father Mark’s Rocket Chassis house car after falling to third place and rallied to grab the top spot from Lanigan for good on lap 26.

Lanigan, 41, settled for a runner-up finish in his Rocket mount, flashing under the checkered flag several car lengths behind Richards after his last-ditch bid fell short. It was the first WoO LMS defeat of 2012 for Lanigan, who followed his $20,000-plus victory in the season opener on Feb. 11 at Screven Motor Speedway in Sylvania, Ga., with a wire-to-wire win on Thursday evening.

WoO LMS Rookie of the Year contender Bub McCool of Vicksburg, Miss., finished third in a Victory Circle by Moyer car. He marched forward from the 12th starting spot to register a career-best placing on the tour, bettering his previous high by eight positions.

Moyer drove his Victory Circle mount to a fourth-place finish after climbing as high as second and falling as far as fifth, and Mike Marlar of Winfield, Tenn., was fifth in the Bryson Motorsports Rocket to earn a top-five finish for the second consecutive night.
{vimeo}37009412{/vimeo}
Richards gained a dose of redemption for his near-miss on Thursday night, when he finished second to Lanigan after having his bid for the lead turned back with two laps remaining. He didn’t let his opportunity to overtake Lanigan slip through his fingers this time.

“We got off to a little bit of a slow start again,” said Richards, who fell back to third by lap eight. “I kept hitting the black with a 20 on the right front and shoving across the center, and Billy (Moyer) got by me. I just had to get back up on it and get back by.

“Once we got some heat in the right front tire we were able to gain some speed and get up on top and roll. That was the key to getting by Darrell. He runs a really aggressive, wide line, and it’s hard to get clear. I knew when I passed him on the front straightaway (on lap 26) it was a make-or-break deal to try and squeeze up through there.”

Beating Lanigan to the finish line was a satisfying development for Richards, whose team parked alongside Lanigan’s in the BRP pit area.

“It was cool to get the 29 behind us,” smiled Richards.

Lanigan, meanwhile, wore a frustrated scowl following the race. The ultra-competitive driver was disappointed that he couldn’t hold on for another victory.

“Our right-rear (tire) sealed over for some reason,” said Lanigan. “I don’t know why, but it did. It happened under the (lap-15) caution. When we went back racing, it felt like we had an old tire on it. I thought we had a flat.”

Lanigan managed to close within a car length of Richards on lap 47, but his hopes evaporated when he bobbled on the cushion in turns one and two that circuit.

“We just got up there and started winging it on the top,” said Lanigan, who ended the night leading the WoO LMS points standings by eight markers over Richards. “We just missed it one lap and lost too much ground to make up.”

DIRTcar UMP star Jason Feger of Bloomington, Ill., finished sixth after taking the green flag from the fifth spot. Chub Frank of Bear Lake, Pa., who switched to his backup car after failing to qualify through his heat, used a provisional to start the A-Main and then came alive, charging forward from the 25th spot to place seventh. WoO LMS rookie contender Brandon Sheppard of New Berlin, Ill., recorded a career-best tour finish of eighth, while Sweeteners Plus teammates Tim McCreadie of Watertown, N.Y., who used a provisional and started 24th, and Vic Coffey of Caledonia, N.Y., placed ninth and 10th, respectively.

Four caution flags slowed the event. Ron Davies of Warren, Pa., was involved in two incidents, slowing on lap 15 and later tangling on the backstretch with Dan Stone of Thompson, Pa., on lap 36. Defending BRP Late Model champion Ivedent Lloyd Jr. of Ocala, Fla., slowed with a smoking car on lap 32 and Shane Clanton of Fayetteville, Ga., relinquished second place on lap 40 due to a cut right-rear tire.

Lanigan was fastest in Ohlins Shocks Time Trials for the second time in three 2012 events, besting the 51-car field with a lap of 13.938 seconds. He established a new track record, nipping Richards’s one-day-old mark of 13.994 seconds.

The Bubba Army Late Model Winter Nationals will conclude on Saturday night (Feb. 18) with a 60-lap A-Main paying $12,000 to win. Hot laps are scheduled to start at 6 p.m. each day and racing is set to get the green flag at 7 p.m.

To listen to the free audio broadcasts, log on to http://www.dirtvision.com/welcome.php and click on the DIRT Radio Network logo.

BLOGGING: WoO LMS fans can now read interesting stories from the road by checking out two blogs – ‘Life As An Outlaw’ by series announcer Rick Eshelman and ‘The Scoop With Scoop’ by tour P.R. director Kevin Kovac. Both blogs can be accessed by clicking on the preceding links or the specific ‘Blog’ buttons on the right-hand side of http://www.woolms.com/.