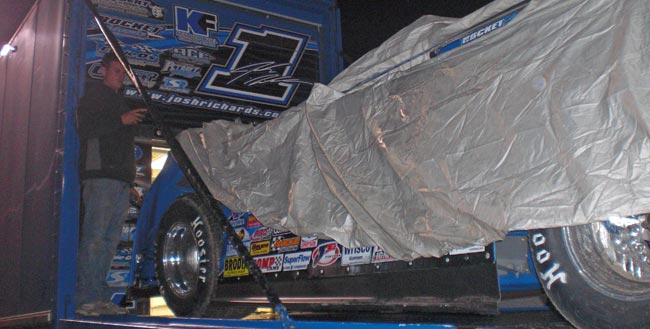 Track promoter Kevin Gundaker was finally forced to cancel the evening’s action after waiting in vain for the precipitation to clear the area at a reasonable time.

Gundaker will talk with WoO LMS officials to determine if a new date for the event can be arranged. Any news will be released on www.worldofoutlaws.com.

It was the second consecutive and eighth overall weather-related cancelation or postponement of the 2011 season for the WoO LMS. The tour’s last scheduled event, on Sept. 4 at Roaring Knob Motorsports Complex in Markleysburg, Pa., was also washed out by rain.

Thirty-seven cars were signed in for Friday night’s program, which would have marked the first WoO LMS event at Tri-City since Gundaker shortened the former half-mile oval to a three-eighths-mile oval prior to the 2008 season.

Just six drivers were still left to take qualifying laps during Ohlins Shocks Time Trials when the rain arrived and stopped the session.

The evening did not end early enough for Chub Frank of Bear Lake, Pa., whose time-trial effort was short-circuited when his car’s right-rear wheel broke and flew off on his first qualifying lap. He bounced to a stop in turn one and was towed off.

Frank was racing with a special protective cast on his right thumb, which he broke in a tangle during heat racing for the World 100 on Sept. 10 at Ohio’s Eldora Speedway.