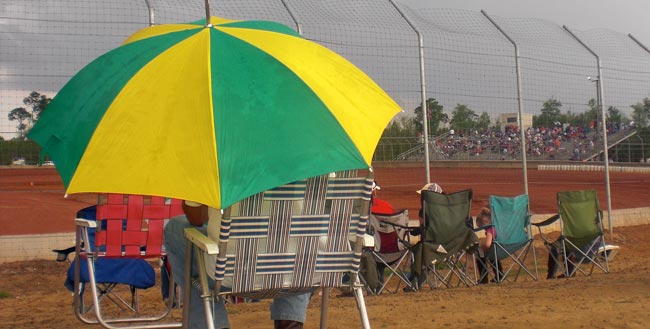 Tour Will Return To Georgia Track For Second Try On Sunday, May 8

WoO LMS director Tim Christman and Needmore Speedway owner Chris Hunnicutt agreed to reschedule the 40-lap, $8,000-to-win show for Sun., May 8. The race will cap a tripleheader weekend in the Southeast for the WoO LMS, which is set to visit Fayetteville (N.C.) Motor Speedway on May 6 and Swainsboro (Ga.) Raceway on May 7.

While severe thunderstorms swept across much of southern Georgia for much of the day on Sunday, the rough weather largely avoided Hunnicutt’s three-eighths-mile oval save for a brief downpour around 12:30 p.m. But two lighter periods of rain – the first at 5:15 p.m. as local-division cars were running in the surface and another at 6:50 p.m. moments after Hunnicutt had scraped the track with a grader – proved impossible to overcome.

“Chris Hunnicutt and his staff deserve plenty of credit for all the hard work they put in to give the racers and fans a great show despite the tough conditions we were dealt,” said Christman. “Unfortunately the weather wouldn’t quite cooperate, but we’ll look forward to returning to Needmore Speedway on Sunday, May 8.”

A field of 26 cars was signed in for Sunday night’s racing program. Rainchecks and pit bands from the event will be honored on May 8.

Sunday marked the second postponement in as many nights for the WoO LMS, which was also rained out on Saturday night at Screven Motor Speedway in Sylvania, Ga.

The WoO LMS will head north for its next action, traveling to LaSalle (Ill.) Speedway for the fourth annual Illini 100 on April 1-2. A $20,000 top prize will be on the line in the 100-lap spectacular at the high-banked, quarter-mile oval.

Drivers signed in for Sunday night’s event at Needmore Speedway: