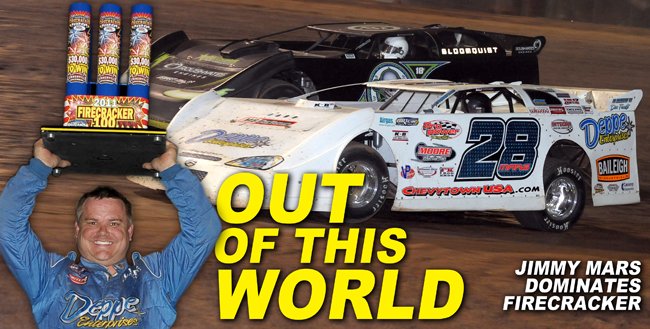 Driving the same MB Customs car that he steered to the checkered flag in the 2009 edition of the summer-starting spectacular, Mars navigated forward from the seventh starting spot to grab the lead from 2007 Firecracker 100 winner Scott Bloomquist of Mooresburg, Tenn., on lap 45 and never looked back. He cruised around the four-tenths-mile oval to post a commanding 4.434-second margin of victory over Bloomquist.

Mars, 39, pocketed $30,050 as he became the first repeat winner of the Firecracker 100, which was contested in front of a massive crowd and the SPEED television cameras. His latest success, however, came in much less dramatic fashion than in ’09 when he pitted early to change a cut tire and rallied to snatch the lead from Darrell Lanigan of Union, Ky., in the final laps.

“This route (to victory) went a little bit smoother,” said Mars, who registered his fourth career win on the WoO LMS. “Usually it seems like all of my bigger wins have been kind of an uphill battle, but tonight went pretty good. Once we were able to get up to the front and kind of run the line that I wanted to, everything was just awesome.”
{vimeo}25613179{/vimeo}
The 46-year-old Bloomquist, who started third and led laps 31-44, ran roughly a straightaway behind Mars throughout the 53-lap stretch of green-flag racing that closed the race. He was clearly second-best – unable to keep his self-built Team Zero mount close to Mars, but also never in danger of losing the runner-up spot.

WoO LMS points leader Rick Eckert of York, Pa., who started from the pole position and led laps 1-30, finished a distant third, 14.715 seconds behind Mars and over 10 seconds in arrears of Bloomquist. It was a career-best placing in the Firecracker 100 for Eckert, who put a $7,650 cap on a weekend that also included runner-up finishes in both 30-lap WoO LMS preliminary A-Mains.

Two-time defending WoO LMS champion Josh Richards of Shinnston, W.Va., also recorded a career-high finish in the Firecracker 100, using a late-race surge to take fourth in his father Mark’s Rocket Chassis house car. He found an outside lane around the track to move from eighth to fourth over the final 30 circuits, falling just a car length short of Eckert at the checkered flag.

Steve Shaver of Vienna, W.Va., completed the top five in the K&L Rumley Rocket car. He started from the outside pole and held second place until losing the spot on a lap-18 restart and ultimately falling two more positions over the remaining distance.

Mars, who finished fourth in Thursday night’s preliminary feature but didn’t compete on Friday evening due to an engine issue, began to show his superiority about a quarter of the way into the 100. A relatively quiet fifth when the race’s third of four caution flags flew on lap 18 for a turn-four spin by Clint Smith of Senoia, Ga., Mars soon turned up the wick, grabbing fourth from Dale McDowell of Chickamauga, Ga., shortly after the restart, third from Shaver on lap 28 and second from Eckert on lap 38.

The Wisconsinite’s relentless march to the front was complete when he ducked underneath Bloomquist off turn two and surged into the lead on lap 45.

“Once my (hard-compound) tires started to get a little bit of heat in them they started working,” said Mars, whose last WoO LMS win came on July 10, 2010, at Dakota State Fair Speedway in Huron, S.D. “(Bloomquist) kind of left the bottom open so we got in the lead and it worked out.”

After the race’s final caution flag was needed on lap 47 when Austin Hubbard of Seaford, Del., slowed with MSD box problems, Mars simply drove away from the field in one of the most dominant performances on the 2011 tour. He scarcely let up, lapping up to the 10th-place finisher.

“You just don’t know what’s gonna happen when you haven’t won for a while,” Mars said of his continued aggressiveness despite holding a substantial lead. “I’ve been too passive in lapped cars before and got snooked in lapped traffic, and I wasn’t gonna let that happen.”

Bloomquist had no answer for Mars’s speed, but he did question its source. Following the race Bloomquist lodged a formal protest with WoO LMS officials concerning Mars’s tires; as a result, Mars’s left-rear and right-front Hoosier tires were impounded to be sent off for detailed laboratory testing underwritten by Bloomquist.

“If the tires are right, we just want to know if they’re right,” Bloomquist told DirtonDirt.com when asked about his decision. “Sometimes it’s good to be sure just to keep everybody honest. My hat will be off twice as high if everything comes back (correct) on tires. It’s not about – again, he had a good car. He looked good out there tonight. I just know that the difference between second and first is substantial.”

Mars flatly denied Bloomquist’s accusation of tire doctoring in an interview with DirtonDirt.com following the event.

Eckert, meanwhile, fell short in his bid to top off his successful visit to Lernerville with a flourish.

“I just made (the car) way too tight for the race,” said Eckert, who ended the Firecracker 100 weekend with a 16-point edge over Richards. “I was pretty sure, as tight as I was when we fired off, that I was gonna have a hard time fending (Bloomquist) off. I just couldn’t rotate the center of the corner. I could early, but I knew I was using a lot of wheel to do it – and then as soon as I overheated the right-front tire I was dead in the water. I didn’t want to see any cautions because I was fading in a hurry.”

Richards, 23, was the hard-charger of the race’s late stages after discovering a very useful outside line around the oval.

“I wish I would’ve gone up there earlier,” said Richards, who reached fourth with a lap-97 pass of Shaver. “I don’t think we were good enough to beat Mars, but I knew we could’ve beat Scott and Eckert. I was up on Eckert’s bumper there at the end, but it was too late. I didn’t want the race to end.”

Tim McCreadie of Watertown, N.Y., finished sixth, marking the second consecutive night that he ended the race in the same position that he started it. Tim Fuller, also of Watertown, N.Y., placed seventh, followed by McDowell, who ran as high as fourth; Dan Stone of Thompson, Pa., who started 21st in the Leo Milus-owned Super Duece; and 2010 Firecracker 100 winner Shane Clanton of Fayetteville, Ga., who was the first driver one lap down at the finish.

Lanigan, who finished second in the last three Firecracker 100s, was never a factor. He moved from the 16th starting spot to 10th by lap 20, but he couldn’t climb any higher and ultimately faded to 13th at the checkered flag.

The race’s first two caution flags were caused by Rookie of the Year leader Pat Doar of New Richmond, Wis., who slowed with a flat left-rear tire on lap two, and Clint Smith, who spun off the backstretch on lap four after getting jostled around in a tangle.

Sixty cars were entered in the final night of the Firecracker 100 weekend.

Matt Lux of Franklin, Pa., salvaged a rough weekend at Lernerville with a victory in the ‘Uncle Sam 30′ Non-Qualifiers’ Race that preceded the Firecracker 100.

Lux, who repaired his car after it sustained significant damage in an opening-lap tangle during Friday night’s preliminary A-Main, passed Eric Wells of Hazard, Ky., for the lead on lap 13 of the ‘Uncle Sam’ event and never looked back. He beat 2009 WoO LMS Rookie of the Year Russell King of Bristolville, Ohio, to the finish line by 1.559 seconds to pocket a cool $3,000 consolation prize.

The Firecracker 100 presented by GottaRace.com will be broadcast on Sat., July 9, at 1 p.m. Eastern Time as a two-hour special event on the SPEED cable network.

The WoO LMS will contest another extra-distance special over the Independence Day weekend with the running of the inaugural ‘Outlaw Sizzler 101’ on July 2-3 at Tazewell (Tenn.) Speedway. A $20,000 top prize will be on the line at the high-banked, one-third-mile oval.