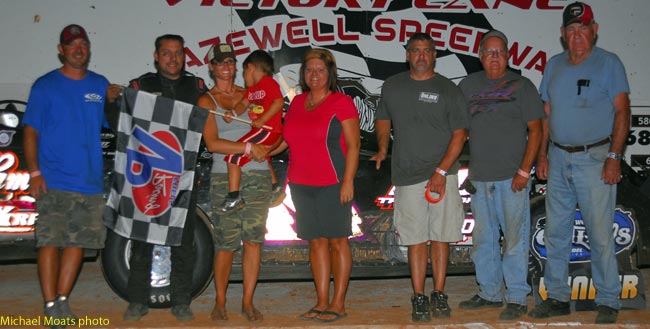 Madden Hangs On For $20,050 Victory In Inaugural ‘Outlaw Sizzler 101’ At Tazewell Speedway

In fact, for most of the extra-distance World of Outlaws Late Model Series event Madden stressed over a mechanical malady that threatened to cost him a sorely-needed big-money triumph in front of an overflow crowd.

Madden, 36, ultimately overcame the trouble and survived a couple close calls while negotiating lapped traffic to become the eighth different winner in 15 A-Mains on the 2011 WoO LMS. It was his seventh career win on the national tour and fourth in a 100-lapper; only Madden’s chassis builder, 2004 WoO LMS champion Scott Bloomquist of Mooresburg, Tenn., has won more 100-lap events on the circuit (six).

“We fought the whole race with a fuel-pressure problem,” said Madden, who started from the outside pole in his Team Zero by Bloomquist car. “We don’t know what it was, but obviously you could tell on restarts I couldn’t take off. I was just trying to ride in the middle of the racetrack and hope I could keep those guys behind me. After I could make it through the first corner it would pick up fuel and I could hold my own then.”

Madden’s restart troubles were most evident after the event’s ninth and final caution flag, on lap 98. He stumbled dramatically on the restart, allowing Eric Jacobsen of Sea Cliff Beach, Calif., who started from the pole position and ran second behind Madden from the initial green flag, to pull alongside the pacesetter heading toward turn one.
{vimeo}25957138{/vimeo}
But Madden managed to slide in front of Jacobsen’s Team Zero machine between turns one and two, keeping the top spot and leaving Jacobsen scrambling to maintain control of his car. Jacobsen was overtaken for second by Jonathan Davenport of Blairsville, Ga., before he could recover.

Davenport went on to finish in the runner-up spot driving the Barry Wright house car, 0.551 of a second behind Madden at the checkered flag. Jacobsen settled for a career-best WoO LMS finish of third, followed by WoO LMS points leader Rick Eckert of York, Pa., in a Team Zero car and 2006 tour champion Tim McCreadie of Watertown, N.Y., in a Victory Circle Chassis.

“I thought the race might be three laps too long,” Madden said when asked about the final restart. “I got off to a real slow start and Jacobsen got next to me, but it just happened that I had four tires in the rubber and he had two (rounding turns one and two) so I got enough traction to stay in front.”

That wasn’t the only close call for Madden. He was fortunate to remain in the lead on lap 34 when he got into the back of Powell, Tenn.’s Steve Smith while attempting to lap the veteran racer, sending Smith into a slide-for-life just past the start/finish line and causing Madden to lose momentum long enough for Jacobsen to surge ahead. A caution flag was thrown for Smith, however, before a lap could be completed, keeping Madden in front.

“My (Cornett-powered) car was perfect,” said Madden, whose previous 100-lap WoO LMS victories came at Volusia Speedway Park in Barberville, Fla. (2006), Volunteer Speedway in Bulls Gap, Tenn. (2007) and Virginia Motor Speedway in Jamaica, Va. (2010). “That thing went around there like it was on a string and I never slid a tire once, so I really wasn’t concerned about the tires.”

The 27-year-old Davenport, meanwhile, had tire conservation on his mind as he calmly navigated to a second-place finish worth $10,050.

“I just used as much as I needed to,” said Davenport, who set fast time and won a heat race on Saturday night and started third in the ‘Sizzler 101.’ “We got to about 30 or 40 (laps) to go and I knew there was no way I could pass those guys (Madden and Jacobsen), so I just made sure I had enough to make it to the end.

“We’re happy,” he added after taking advantage of Jacobsen’s lap-98 slide to steal second place. “We came out here, didn’t tear nothing up and were one of the fastest cars every time we went on the racetrack, so all in all it was a good weekend for us.”

Jacobsen, who followed the WoO LMS fulltime in 2006, wasn’t disappointed after falling short.

“I thought we had a really good car tonight and it was competitive enough to win the race,” said Jacobsen. “I thought there were a couple times in lapped traffic where I could’ve made a run at (the lead), but track position meant a lot and the right opportunity never presented itself.”

Eckert enjoyed a quiet-but-solid run to fourth place. He started 11th and moved forward by benefitting from others’ misfortune – the kind of drive that is needed to win a championship.

With Richards running into trouble in the final laps and finishing 16th after making a pit stop, Eckert stretched his WoO LMS points lead to 40 markers over the two-time defending champ.

“About lap 30 (the track) started rubbering up – and I knew 70 more laps in the rubber is a long time around here,” said Eckert, who is the only driver to start every WoO LMS A-Main since 2004 but has never won the title. “I’ve been around for awhile so I just understood that I needed to take care of my tires and I just eased up. I ran myself a decent pace not near anybody so I didn’t get collected – and then they all just started blowing out tires and we kept moving up.

“Sometimes you gotta slow down to end up better, and that’s what we did tonight. We didn’t have a very good car, but we ended up with a fourth-place finish. If we keep doing stuff like that we’ll be in good shape.”

McCreadie, who started alongside Eckert in 12th place, also benefitted from the rash of flat tires to crack the top-five. He also moved up to third in the WoO LMS points standings, overtaking Lanigan, who finished 14th after pitting to change a flat right-rear tire.

Clanton made the biggest rally of the drivers who pitted for flats, reaching sixth place at the finish. Tommy Kerr of Maryville, Tenn., finished seventh, followed by Clint Smith (after pitting), Mark Vineyard of Powell, Tenn., and 17th-starter Chub Frank of Bear Lake, Pa.

Despite high speeds and close-quarters racing, the only significant accident of the ‘Sizzler’ came on lap 98 when several cars stacked up on the backstretch as Richards slowed with a flat tire. Davies got the worst of the incident, sustaining a busted radiator after running into the back of Lanigan’s car.

Steve Smith won the 15-lap B-Main that kicked off Saturday evening’s program, which was run under hot summer conditions.