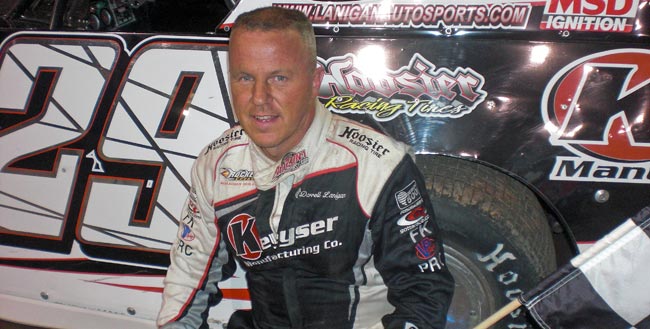 The 41-year-old former series champion overtook Chad Simpson of Mt. Vernon, Iowa, for the lead on lap 26 and cruised to his second straight and seventh overall win of the 2011 season. He matched his single-season career-high win total on the national tour and moved within two triumphs of equaling Scott Bloomquist’s WoO LMS record of nine victories in 2004.

“We’ve just been doing our own little thing and it’s definitely been working,” said Lanigan, whose $10,775 win was his third in four starts over an eight-day span. “Our car’s been awesome.”

WoO LMS points leader Rick Eckert of York, Pa., finished second for the third time in the last four tour A-Mains, ending the race 0.924 of a second behind Lanigan after a lap-48 caution period gave him a chance to make a last-ditch bid. The green-white-checkered finish was necessitated by the misfortune of Simpson, who led laps 1-25 and appeared headed to a career-best WoO LMS finish until his car’s rearend gears broke as he held second place.

Don O’Neal of Martinsville, Ind., placed third in Larry Moring’s car after slipping as far back as seventh from the fourth starting spot. He earned the $500 ‘Bonus Bucks’ cash for being the highest-finishing driver who hasn’t won a WoO LMS A-Main and isn’t ranked among the top 12 in the series points standings.

Shane Clanton of Fayetteville, Ga., charged forward from the 23rd starting spot to finish fourth after using a provisional to gain entry to the A-Main. A heat-race scrape and flat tire prompted him to park his Rocket car and drive his Capital Race Car in the B- and A-Mains.

Steve Francis of Ashland, Ky., placed fifth after starting seventh. He was overtaken for fourth by Clanton racing toward the white flag.
{vimeo}27280334{/vimeo}
Lanigan started on the pole position in his GottaRace.com Rocket, but he watched Simpson blast off the outside of the front row to assume command at the initial green flag. Simpson, 32, controlled the race’s first 25 laps before finally ceding the top spot to Lanigan, who ducked to the inside of the backstretch to make his winning move.

“He ran a good heat heat race and I knew he was gonna be the one to beat on the outside pole,” Lanigan said of Simpson. “We had a little bit harder tire than some of the people. I knew I was gonna be better the second half of the race, so I was kind of just biding my time (behind Simpson). As long as I could stay with him, I knew I could get around him there at the end.”

Lanigan was slowed by three of the race’s five caution periods after he grabbed the lead, but he never faltered on a restart. He held on for his 26th career win on the WoO LMS and his third set of back-to-back victories on this year’s tour.

Simpson was unable to keep pace with Lanigan after losing the top spot but still had a firm grip on runner-up money until slowing with two laps to go.

“I was a little tight in the middle (of the corners), but other than that the car was rolling around there pretty good,” said Simpson, who was credited with a 17th-place finish. “I don’t know if the right-front (tire) gave up or what, but as the race went on I just got tighter in the middle of the corner and then I couldn’t rotate.”

How disappointed was he after his lap-48 misfortune?

“Flat out, it sucks,” said Simpson. “We had the best car we’ve ever had in a big show like this. We know we’re good enough to run with these guys but just never put the whole package together. We put it together tonight but got snakebit.”

Eckert, 45, took advantage of Simpson’s mechanical woes to add another bridesmaid finish to his ’11 ledger. With his closest pursuer in the points standings, two-time defending champion Josh Richards of Shinnston, W.Va., finishing 11th after relinquishing third place to a cut left-rear tire on lap 33, Eckert extended his edge to 60 points through 22 events.

“Second pays the bills,” said Eckert, who started fifth. “We come to win, but if we can’t win second’s the next best thing. If we keep this up we might be able to pull something (his first-ever WoO LMS title) off.

“We had a car good enough to pass tonight, but I never really got a chance to run with Darrell,” he added. “From the two laps I was behind (following the lap-48 restart), I think I might have been as good as him through (turns) one and two, but I lost a little time getting into three because I had my shocks a little messed up to run through that choppiness and I’d get myself loose.

Richards was one of four WoO LMS regulars who ran into trouble during the A-Main. He was joined by Austin Hubbard of Seaford, who retired from the race on lap 12 when his Dale Beitler-owned car suffered terminal engine problems as he ran ninth; Tim Fuller of Watertown, N.Y., who gave up ninth place to motor woes on lap 40; and Tim McCreadie of Watertown, N.Y., who held fourth when a broken right-rear shock mount knocked out his Victory Circle car and ended his streak of 12 consecutive top-10 finishes.

Jimmy Mars of Menomonie, Wis., who finished third in last year’s WoO LMS A-Main at Shawano, was running sixth on lap 26 when a broken right-front lower control arm forced him out of the race.

Francis topped the 37-car Ohlins Shocks Time Trials session with a lap of 19.284 seconds. His first fast-time honor of 2011 earned him a $100 bonus from Mid-States Hydraulics and made him the second driver to record a fast time in every WoO LMS season since 2004, joining Richards in the elite group.

Heat winners were Francis, Richards, Lanigan and Simpson. The B-Mains were captured by Coffey and Chip Brindle of Chatsworth, Ga.

Among the non-qualifiers were Billy Moyer of Batesville, Ark., who won last year’s WoO LMS A-Main at Shawano, and DIRTcar UMP star Jason Feger of Bloomington, Ill. Both drivers dropped out of the first B-Main – Moyer due to an overheating engine and Feger after spinning in a late-race tangle.

Next on the WoO LMS schedule is the 24th annual USA Nationals presented by U.S. Steel on Aug. 4-6 at Cedar Lake Speedway in New Richmond, Wis. After a Cornbelt Clash Series event kicks off the weekend on Thurs., Aug. 4, the WoO LMS takes center stage with USA Nationals time trials, heats and a dash on Fri., Aug. 5, and then last-chance events and the 100-lap, $50,000-to-win A-Main on Sat., Aug. 6.

Details on the USA Nationals are available by logging on to www.cedarlakespeedway.com.