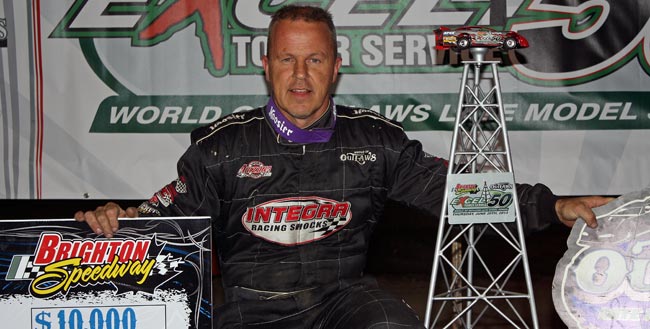 Lanigan, 43, of Union, Ky., roared off the outside pole starting spot to grab the lead from front-row mate Josh Richards of Shinnston, W.Va., at the initial green flag and never looked back. His two-race-old Rocket Chassis machine became stronger as the race wore on, propelling him to a convincing 3.187-second margin of victory over Richards.

The $10,650 triumph in Brighton’s first-ever WoO LMS event was Lanigan’s tour-leading fifth of the 2013 season. It came almost exactly 24 hours after he was nearly lapped while struggling to a 14th-place finish in a WoO LMS event at Fonda (N.Y.) Speedway.

“We struggled to death last night, so man, it definitely pays off to work hard,” said Lanigan, whose streak of seven straight top-three finishes ended at Fonda. “Me, (chief mechanic) Jason (Jameson) and (crewman) Adam (Logan) put our heads together and we came up with a pretty good plan. We put some stuff that Jason learned last week on (a car) he drove and it definitely works good.

Lanigan’s impeccable mount was the same car he debuted so inauspiciously the previous night at Fonda. Everything the car didn’t do in its first racetrack appearance it did flawlessly in Canada.

“I thought we were good (at the start),” said Lanigan, “and then we moved to the bottom and got really good. I could actually run through the corner and not hardly even lift. It was just unreal.”

Richards, 25, stayed within a few car lengths of Lanigan during the race’s first 24 laps, which were slowed by caution flags for Gil Tegg Jr. of Rochester, N.Y. (slowed in turn three on lap six); a turn-two tangle involving seventh-place Tim Fuller of Watertown, N.Y., and the lapped Jon Rohacevich of Prattsville, N.Y. (lap 18); and Larry Wight of Phoenix, N.Y. (slid to a stop high in turn four). But over the final 26 green-flag circuits Lanigan pulled away with ease.

“I knew I had a big lead,” said Lanigan, whose increased his alltime-best WoO LMS win total to 46. “But I could just roll right through the center and be just as good, so I just kept rolling.”

Richards conceded that Lanigan was the class of the field.

“I knew after we made one corner that we just didn’t tighten up enough (for the feature),” said Richards, who extended his WoO LMS points lead to 32 points over Clanton. “I’m frustrated that we started on the pole and got beat, but Darrell just had the better car and beat us tonight.

“The track had a lot more grip in it earlier and we really didn’t adjust our car enough for later. We just kind of left it alone. It still drove really good, but it just wasn’t quite right for that (slicker) condition in the feature.

“The track had shiny spots and traction spots and as long as I hit the traction spots I was fine,” he added. “The longer the race went on, though, the black (shiny) spots got a lot wider. I was a little too free in those spots, but Darrell could go right through them and maneuver through lapped real good.”

Beyond the top-two finishers, Frank, 51, was story of the race. He enjoyed his best outing of the season, reaching third by lap 20 and holding strong to the show position for the remainder of the distance.

“It was a good run for us,” said Frank. “We were a little tight if we slowed down and loose if we ran in there hard like them (leaders) were, but we’re happy. (Lanigan and Richards) are the two guys that you gotta beat, so I guess finishing behind them is almost like a win – for us anyway right now.”

Finishing in positions 6-10 was Rick Eckert of York, Pa., who quietly inched forward from the 10th starting spot; WoO LMS rookie Morgan Bagley of Longview, Texas, who started third and briefly nosed ahead of Richards for second on two restarts before falling from the top five late after he was forced off the track’s wall-less backstretch; Bub McCool of Vicksburg, Miss., who was celebrating his 36th birthday; Andrew Reaume of Blenheim, Ont.; and 17th-starter Billy Decker of Unadilla, N.Y.

Thirty-six cars were signed in for the evening’s action.

Ohlins Shocks Time Trials were split into ‘A’ and ‘B’ groups, with the first half competing for starting positions in heats one and two and the second half racing against the clock to align heats three and four. Wells’s lap of 13.753 seconds in Group A was the fastest overall time of the night.

Wells earned his second WoO LMS fast-time honor of 2013 in what was his first-ever start at a track in Canada.

Heat winners Richards, McCool, Fuller and Reaume, who became just the second Canadian driver in WoO LMS history to claim a heat. The B-Mains were captured by Decker and Corey Earl of Picton, Ont.

The WoO LMS will be silent for two days before returning to action on Sunday night (June 23) at Cornwall (Ont.) Motor Speedway. The 50-lap, $10,000-to-win event brings the tour back to the quarter-mile oval after a one-year absence caused by wet weather in 2012.

BRIGHTON, ONT – June 20, 2013 – The World of Outlaws Late Model Series is north of the border tonight making its first-ever visit to Brighton Speedway for the Excel Tower Service 50.

A one-third-mile oval that sits just under two hours southwest of the Thousand Islands Bridge above Watertown, N.Y., Brighton features crate Late Model racing on a regular basis. Tonight’s $10,000-to-win A-Main will represent the richest event in the track’s history.

11 p.m. – Following a lengthy Victory Lane ceremony that included a fireworks display, Darrell Lanigan is back at his trailer enjoying his circuit-leading fifth win of 2013.

Lanigan outgunned fellow front-row starter Josh Richards for the lead at the initial green flag and never looked back in the Excel Tower Service 50. He got stronger as the race wore on, defeating Richards by a commanding 3.187 seconds.

9:50 p.m. – The eight-minute horn to line up the A-Main has been blown as the open-wheel Modified feature winds down. The 24-car WoO LMS field will soon take to the track for driver introductions and then the Excel Tower Service 50.

9:25 p.m. – The twin 12-lap B-Mains were completed a short time ago, setting the stage for the Excel Tower Service 50. Billy Decker and Canadian Corey Earl captured the last-chance events; John Mason and Greg Oakes also transferred through the first B-Main, and Greg Belyea and Philip Potts moved on through the second B-Main.

The points provisional starters are Jon Rohacevich and Gil Tegg Jr., who actually was the runner-up in the second B-Main but was disqualified for weighing in light post-race. It marked the second consecutive night that Tegg came up light at the scales in Oakes’s second car; last night at Fonda he lost his time-trial lap.

The open-wheel Modified feature is now rolling on the racetrack, with the WoO LMS headliner to follow.

8:45 p.m. – The race to turn one at the start of the Excel Tower Service 50 will be an interesting one after traveling buddies and racing rivals Josh Richards and Darrell Lanigan picked the top-two spots in the feature redraw. Richards (three wins this season) will go off from the pole and Lanigan (four wins) will start second.

At the conclusion of the feature redraw, WoO LMS announcer called McCool back up on the mobile stage and asked the crowd to shout out, “Happy birthday Bub!” McCool, who is celebrating his 36th birthday today, gave the fans a sheepish grin.

The first of two B-Mains (qualifying three from each) is now on the track….

8:10 p.m. – Josh Richards, Bub McCool, Tim Fuller and Andrew Reaume were victorious in the four 10-lap heats, which transferred the top-four finishers from each to the Excel Tower Service 50. The top-two finishers in each heat will redraw for feature starting spots 1-8…. Fast-timer Eric Wells was penalized two spots after officials deemed he started Heat 1 too early. He didn’t recover, running third for the entire distance…. Richards held off a strong Dan Stone to win the first heat. Stone actually turned the fastest lap of the prelims (14.135 seconds)…. Fuller’s triumph in the third heat was his sixth of the season, tying him with Shane Clanton for the third-most on this year’s tour…. Reaume, a rising DIRTcar UMP Late Model driver who made the four-hour tow up from his home near South Buxton (Ont.) Speedway, looked very impressive in winning the fourth heat over Darrell Lanigan. Ironically, Reaume has developed a friendship with Lanigan in recent years, even traveling with the WoO LMS star to several events last year to get a first-hand education… With his victory, Reaume became the second Canadian in WoO LMS history to win a heat race. Mike Balcaen of Winnipeg, Manitoba, was the first, taking a heat on July 10, 2009, at River Cities Speedway in Grand Forks, N.D….

7:30 p.m. – WoO LMS Rookie of the Year Eric Wells was the fastest overall qualifier in the split Ohlins Shock Time Trials, turning a lap of 13.753 seconds in the first qualifying group to earn his second fast-time honor of the season.

Tim Fuller was fastest in the second qualifying group with a lap of 13.899 seconds. The New Yorker is off to a good start as he bids to end a WoO LMS winless streak that now exceeds three years; his last triumph came on Canadian soil on June 17, 2010, at Merrittville Speedway in Thorold, Ont.

6:30 p.m. – A unique feature at Brighton Speedway is the creek that runs between the pit area and wall-less backstretch, necessitating drivers to cross a short bridge to reach the racing surface.

According to Brighton promoter Mark Rinaldi, a race car has never ended up in the creek after sliding off the track. But during tonight’s second hot-lap session, the feat was nearly achieved by New Yorker Jon Rohacevich, who spun on the backstretch and came to rest with his back wheels at the edge of the hill leading to the water.

The spot where Rohacevich’s machine stopped – and the bridge leading to the backstretch – is pictured below.

5:45 p.m. – Dirt Late Model veteran John Mason of Millersburg, Ohio, has been a stalwart entrant in Canadian WoO LMS events since the tour began crossing the border in 2007.

Why has Mason been such a big supporter of the Canadian shows? It’s a chance for Mason to simultaneously go racing and visit his longtime buddy Bert Robideux, who operates the well-known Bert Transmission business based in Montreal, Que.

This year Mason is extending his swing with the WoO LMS, sandwiching the Canadian events tonight and Sunday at Cornwall Motor Speedway with starts at Fonda Speedway last night and Canandaigua (N.Y.) Motorsports Park on June 25. There isn’t a race in Robideux’s home province of Quebec this year, but Mason will hook up with his pal at Cornwall.

Mason is running these races with a minimum of assistance. His crew consists of….his daughter Kerry.

It’s a father-daughter trip, but don’t call it a vacation even though the WoO LMS has off days on Friday, Saturday and Monday.

“I hope this isn’t my vacation for the year,” Kerry quipped with a smile – and then added, “I think I’m along so he can get some sleep while I drive the truck.”

4:45 p.m. – The WoO LMS is enjoying a second straight day of absolutely spectacular weather as sunny skies with temperatures in the 70s are prevailing today at Brighton Speedway.

A strong contingent of Canadian entrants is also on hand, including former Brighton crate Late Model champion Greg Belyea, who is driving Chub Frank’s second car; Charlie Sandercock, who will be behind the wheel of Briggs’s second machine; and Andrew Reaume, a DIRTcar UMP Late Model standout at South Buxton (Ont.) Speedway.

With still over an hour before the scheduled start of tonight’s drivers’ meeting, the dirt Late Model car count is approaching the 40 mark.