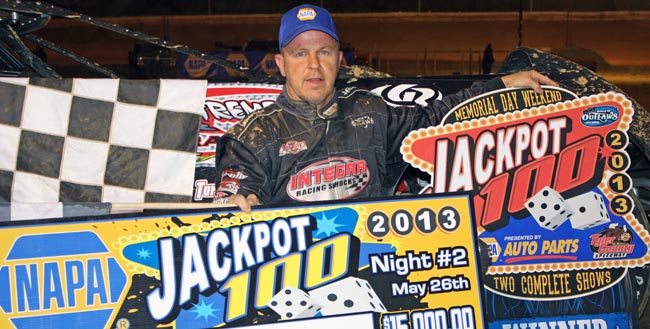 Lanigan Holds Off Richards For $15,000-Plus Score In Sunday’s Finale Of Jackpot 100 by NAPA At Tyler County Speedway

The defending World of Outlaws Late Model Series champion from Union, Ky., never relinquished the lead after inheriting the top spot on lap 41 when Tim Fuller of Watertown, N.Y., slowed with a flat right-rear tire, but he was dogged throughout the closing stages by Shinnston, W.Va.’s Richards. The outcome was in doubt until Lanigan reached the finish line with a slim winning margin of 0.594 of a second over Richards.

Lanigan, 42, registered his tour-best fourth victory of 2013 but first since the final night of February’s season-opening swing through Georgia and Florida. He pocketed $15,650 for his performance, which gave him a big-money win at the quarter-mile oval for the second consecutive year. In 2012, Lanigan captured the inaugural Jackpot 100 by NAPA, which was run as a stand-alone, one-day 100-lapper.

Bub McCool of Vicksburg, Miss., who started from the outside pole and led laps 1-21, finished about three seconds behind the pacesetters in third place. He was overtaken for the runner-up spot by Richards on the race’s sixth and final restart, on lap 41, and spent the remainder of the distance holding strong in the show position to record his best WoO LMS finish of the season in his Victory Circle car.

Davey Johnson of Latrobe, Pa., who started sixth, finished fourth in his brother Mike’s Rocket machine despite competing with a possible broken left wrist. He was injured during the previous night’s 30-lap A-Main when his car lost power on a restart and was hit several times from behind, causing his hand to get jammed in the steering wheel.

Shane Clanton of Zebulon, Ga., completed the top five in the Kennedy Motorsports Capital Race Car. He started fourth and briefly climbed up to third early in the event before settling into fifth place.

Lanigan, who started fifth in his Rocket mount, appeared to come alive shortly before the race’s halfway mark. He slid by Richards for third on lap 28 and slipped underneath McCool for second on lap 35, but he still found himself a full straightaway behind Fuller, who had driven his Kennedy Motorsports Capital Race Car around the outside of the track to move from the seventh starting spot to the lead by lap 22.

Fuller, 45, looked intent on erasing the bitter memory of his last-turn loss to Richards in Saturday night’s A-Main, but his bid ended in disappointing fashion when he slowed with a cut right-rear tire on lap 41 to bring out a caution flag. He pitted and returned but could only manage a 10th-place finish.

“Fuller had a good line out there on the outside,” said Lanigan, who pushed his WoO LMS record career win total to 45. “But I knew we was a lot softer (on tire-compound selection) so I was just trying to conserve our tires.

“We was reeling him in (after reaching second). Whether or not we would’ve passed him or not, I don’t know. But he definitely had a good car.”

Richards, who started from the pole position in his father Mark’s Rocket Chassis house car but didn’t lead a single lap, immediately took up the chase of Lanigan following the lap-41 restart. The 25-year-old sensation was able to nose under Lanigan’s car several times, but Lanigan’s smooth style prevented Richards from pulling off more heroics to sweep the Jackpot 100 by NAPA doubleheader.

“I really didn’t know he was back there,” Lanigan said of Richards. “You can’t really get any signals out there (from crewmen), but the car was good and we just ran our own line out there.”

Richards credited Lanigan for his savvy maneuvering, but he felt he might have allowed the race to slip through his fingers.

“I think we were better than he was, and I was just kind of riding for a little bit trying to make something happen,” said Richards, who pushed his WoO LMS points lead to 48 markers over Clanton. “But he did what he had to do and used the track. Once I found my sweet spot and ran a little bit wider I could run up over top of him, but there just wasn’t anywhere to go.

“I’m kind of mad at myself that we didn’t try a little harder (to pass Lanigan). Actually, I thought we had more laps left. It just kind of shocked me when I saw the white (flag).”

In a race slowed by six caution flags, the casualties included third-starter Tim McCreadie of Watertown, N.Y., who had slipped to the back end of the top 10 before a lap-20 tangle in turn four left his car’s nose too damaged for him to continue.

Rick Eckert of York, Pa., finished sixth, rallying from the 22nd starting spot after qualifying through a B-Main. WoO LMS rookie Morgan Bagley of Longview, Texas finished seventh for his third top-10 run in a row; Scott James of Bright, Ind., was eighth after starting 20th; Clint Smith of Senoia, Ga., recovered from a lap-three tandem spin with Mason Zeigler of Chalk Hill, Pa., to place ninth; and Fuller rounded out the top 10.

Ohlins Shocks Time Trials were split into ‘A’ and ‘B’ groups, with the first half competing for starting positions in heats one and two and the second half racing against the clock to align heats three and four. Richards registered the quickest overall lap of the evening at 12.620 seconds in Group ‘A’ to earn his series-leading fourth fast-time honor of 2013, while McCreadie topped Group ‘B’ with a circuit of 12.900 seconds.

Heat winners were Richards, Johnson, Clanton and McCool. The B-Mains were topped by Derek Doll of Greenwood, W.Va., and Eric Wells of Hazard, Ky.

The next action for the WoO LMS is two events in the Northeast: the Fulton Bank 50 on Thurs., May 30, at Delaware International Speedway in Delmar and a 50-lapper on Sat., June 1, at Stateline Speedway in Busti, N.Y. Both races carry a first-place prize of $10,000.

2013 World of Outlaws Late Model Series Point Standings as of May 26 – 16 A-Mains completed (rank/driver/points/deficit to leader):