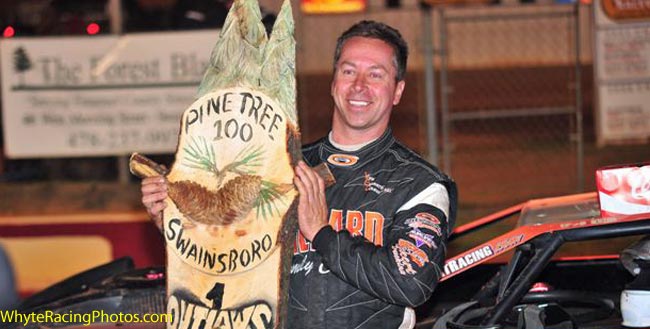 SWAINSBORO, GA – May 7, 2011 – Rick Eckert was unable to attend his daughter’s college graduation ceremony on Saturday, but he gave her a very memorable present.

With a dominating performance behind the wheel of his Team Zero by Bloomquist car, Eckert rolled to a wire-to-wire victory in Saturday evening’s World of Outlaws Late Model Series ‘Pine Tree 50’ at Swainsboro Raceway.

Eckert, 45, of York, Pa., earned $10,775 for his first triumph of 2011 on the national tour. He also grabbed the WoO LMS points lead for the first time since June 2006, vaulting past two-time defending champion Josh Richards of Shinnston, W.Va., who finished 19th after losing eight laps while his crew attempted to repair his car’s folded front bumper.

“Coming down the road (en route to the three-eighths-mile Georgia track), I was thinking, Boy, it would be neat if I could win tonight and dedicate it to her,” Eckert said when asked about his 22-year-old daughter Courtney, who celebrated the completion of her education at Millersville (Pa.) University on Saturday afternoon. “Fortunately it worked out that way. This one’s definitely for my daughter.

“She was mad that I couldn’t be there, but I said I really needed to stay out here and try to keep up in the (WoO LMS) points. Now I’ve got some good news to tell her.”

Six caution flags slowed the rough-and-tumble event, but Eckert faced little resistance on the restarts. He took advantage of his pole starting spot – a position drawn for him by a young fan who ironically wore a t-shirt emblazoned with the memorial race of Eckert’s longtime car owner Raye Vest – to lead the entire distance without a serious challenge.
{vimeo}23430580{/vimeo}
“I was out there running around the middle to the top early,” said Eckert, whose 22nd career WoO LMS victory snapped his 20-race winless streak dating back to his last success on July 30, 2010, at Attica (Ohio) Raceway Park. “Then my crew guys Bob (Miller) and Dan (White) told me that I needed to move down, so I started running the inside and the car worked great there. We really hit on something tonight.”

Eckert easily outdistanced runner-up Chub Frank of Bear Lake, Pa., who crossed the finish line 2.728 seconds behind the winner. Frank, 49, advanced from the 12th starting spot to register a season-best finish in his Rocket car.

“I got pushed up high early in race and I found that my car was free enough to drive up there,” said Frank, who wrestled second place away from Darrell Lanigan of Union, Ky., following the race’s final restart, on lap 31. “The track kept getting rougher and rougher on the top, though, so you really had to be up on the wheel to hold it there. If they could’ve run it in a little better and smoothed it out, maybe I would’ve had something for (Eckert). It just got so rough up there, I just couldn’t stay up there.”

Lanigan, 40, settled for a third-place finish after needing just seven laps to hustle his Rocket machine from the ninth starting to second behind Eckert. The 2008 WoO LMS champion saw his two-race win streak on the tour come to an end, but he did record his sixth consecutive top-three finish and pulled into a tie for second place in the points standings with Richards, 22 points behind Eckert.

Sweeteners Plus Racing teammates Vic Coffey of Caledonia, N.Y., and Tim McCreadie of Watertown, N.Y., finished fourth and fifth, respectively. Coffey moved forward from the 11th starting spot to score his second top-five finish in the last three WoO LMS events, while McCreadie, who started third, slipped backward in a car that sported damage to the left-front corner of its nosepiece.

With his triumph before a standing-room-only crowd that Swainsboro owner Paul Purvis called the biggest in his decade at the track, Eckert received a unique ‘trophy’ that was carved out of wood by an expert chainsaw sculptor during the town of Swainsboro’s annual Pine Tree Festival. He lifted the heavy piece while posing for photographers in Victory Lane.

“That’s a cool trophy,” said Eckert, who is in his second season fielding his own team. “That’s different that most trophies you see. I’m excited about winning it.”

Shane Clanton of Fayetteville, Ga., finished sixth after battling for a top-five spot with McCreadie for much of the distance and Clint Smith of Senoia, Ga., placed seventh after failing to tighten up his car following a heat-race victory. Dennis ‘Rambo’ Franklin of Gaffney, S.C., outdueled Greg Johnson of Bedford, Ind., for eighth place – and the $500 WoO LMS ‘Bonus Bucks’ cash for being the highest-finishing driver who hasn’t won a tour event and isn’t ranked among the top 12 in the points standings – and 2010 WoO LMS Rookie of the Year Austin Hubbard of Seaford, Del., rounded out the top 10 after he was forced to restart at the rear of the field because he slid to a stop in turn two while battling for fifth on lap seven.

With 33 cars on hand, Lanigan was quickest in Ohlins Shocks Time Trials, turning a lap of 14.699 seconds to earn his first fast-time honor of 2011. It was the second straight year that he topped qualifying in WoO LMS action at Swainsboro.

Heat winners were Smith, McCreadie, Richards and Tony Knowles of Tyrone, Ga., who recorded his first-ever WoO LMS heat-race victory. The B-Mains were captured by Johnson and Johnny Pursley Jr. of Clover, S.C.

The WoO LMS heads to southern Georgia on Sunday for a Mother’s Day evening show at Needmore Speedway in Norman Park. It will mark the tour’s first-ever appearance at Chris Hunnicutt’s three-eighths-mile oval, which will present a 40-lap A-Main paying $8,000 to win.

2011 World of Outlaws Late Model Series Point Standings as of May 7 – 8 A-Mains completed (rank/driver/points/deficit to leader):