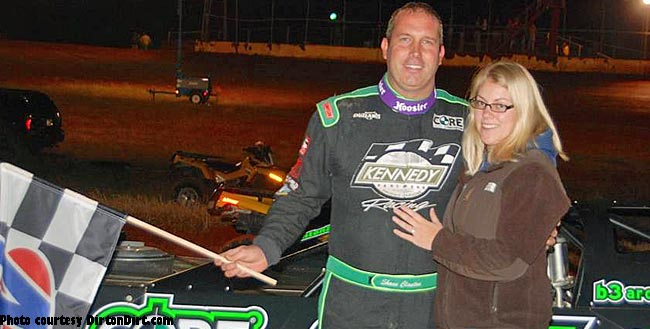 Racing in front of his home-state fans, the 37-year-old driver from Fayetteville, Ga., roared off the pole position to lead the entire distance in the Kennedy Motorsports Capital Race Car. He was never seriously challenged en route to pocketing $8,050 for his 17th career WoO LMS triumph and first in the tour’s lidlifter.

Two-time WoO LMS champion Josh Richards of Shinnston, W.Va., finished second in the Rocket Chassis house car, 1.439 seconds behind Clanton. The 24-year-old star moved up from the third starting spot to run in the runner-up position for all 40 circuits.

Clanton, who finished third in the 2012 WoO LMS points standings but won just a single A-Main, had plenty of reasons to smile after his dominating performance. But it seemed he was most satisfied about putting a cherry on top of his car owner John Kennedy’s already unforgettable day.

As Clanton was traveling to Screven on Friday afternoon he learned that Kennedy’s wife had just given birth to twins – boy Grady and girl Keegan – in the couple’s hometown of Phoenix.

“We had a special gift today – our car owner had two babies,” said Clanton, who is in his second season driving for Kennedy Motorsports. “It’s special to dedicate this win to them. The babies’ mama said, ‘They need shoes already, so get up on the wheel.'”

Clanton did just that, controlling the race from start-to-finish. Unlike last year’s ‘Winter Freeze’ at Screven, he didn’t let a pole position start slip through his fingers.

“We looked in our notebook and didn’t do what we did last year,” said Clanton, who slipped backward at the start one year ago and settled for a disappointing fifth-place finish. “We did the opposite of what we did and it was good.

“This is the third year on our (Capital) car, so the more races we run, the better we can judge what we need to do at certain times and what we need to do for adjustments. Right now me and (chief mechanic) Jonathan (Owenby) are jelling pretty good at what we need to do to the car. We worked on a lot of stuff over the winter and have gotten better.”

Clanton would love for Friday’s performance at the three-eighths-mile oval to serve as a harbinger of a big season ahead.

“I hope it’s one those years like Lanigan had (in 2012),” said Clanton, who sits atop the WoO LMS points standings for the first time since he briefly held the spot after the seventh race of the 2009 season. “He started his year out with a win here last year so hopefully I can do the same thing.”

Richards, who plans to return as a WoO LMS regular this season after leaving the tour early last year to compete on the NASCAR Nationwide Series, was satisfied with his second-place run.

“Clanton was definitely better,” said Richards. “I was just a little free. We experimented with a lot of stuff tonight and I feel like we had a really good car, but it’s hard when you try new things and don’t know how far to go. It’s a brand-new car and it felt great, but we just kind of maintained where we were all race, just held onto our track position. We gotta figure out what the car likes a little more.”

Two caution flags slowed the race. On lap one outside polesitter Dale McDowell of Chickamauga, Ga., slid sideways between turns one and two due to a broken left-front suspension, setting off a chain-reaction pileup that left Sweeteners Plus teammates Vic Coffey of Caledona, N.Y., and Tim McCreadie of Watertown, N.Y., crashed together and unable to continue. Later, on lap 12, Dan Stone of Thompson, Pa., stopped on the inside of turn one.

Thirty-nine cars were signed in for the start of the 10th WoO LMS season under the World Racing Group banner.

Richards was fastest in Ohlins Shocks Time Trials with a lap of 14.352 seconds. It was his 32nd career fast time honor, moving him within one of York, Pa.’s Rick Eckert on the tour’s alltime list.

Heat winners were Richards, McDowell, Tim Fuller of Watertown, N.Y., and Clanton. The B-Mains were captured by Casey Barrow of Savannah, Ga., and Ray Cook of Brasstown, N.C.

SYLVANIA, GA – Feb. 8, 2013 – The 2013 World of Outlaws Late Model Series campaign kicks off tonight with Round 1 of the second annual ‘Winter Freeze’ at Screven Motor Speedway, a three-eighths-mile oval about 45 minutes Northwest of Savannah.

11:15 p.m. – Shane Clanton is back at his hauler, celebrating his victory in the 2013 WoO LMS season opener. He roared off the pole position to lead the entire 40-lap distance and pocket the $8,000 top prize.

10:15 p.m. – The B-Mains are completed — Casey Barrow won the first over Dillon Wood and Eric Wells, and Ray Cook captured the second over Larry Timms and Sam Stile — and the eight-minute horn to line up the A-Main has been blown.

Frank’s met a spectacular demise in the second B-Main. With two laps to go he attempted to pass Stile for the third and final transfer spot, but his low-side dive saw him clip the inner berm between turns three and four, sending his car into a mid-air, 360-degree snap spin. Frank actually stepped on the gas and continued after spinning, but he had to pull off because of a badly damaged nose. With his primary car already sidelined by a broken rearend, Frank’s crew is scrambling to patch up his machine to use his emergency provisional.

Clanton on the pole

9:35 p.m. – Shane Clanton drew the pole position for the 40-lap A-Main. He also started from the pole in last year’s 60-lap Winter Freeze headliner, but he made an incorrect tire selection and never led a lap nor was a serious factor, finishing fifth.

Dale McDowell will start from the outside pole. Josh Richards will take the green from third, followed by Clint Smith, Ron Davies, Gregg Satterlee, Tim Fuller and Casey Roberts.

Tonight’s pair of 12-lap B-Mains (transferring three from each) will soon be hitting the track. Mike Marlar is scheduled to start from the outside pole in the second B-Main, but he has indicated that he will scratch due to damage his car sustained in a heat incident. Tim McCreadie and Chub Frank, meanwhile, have switched to backup cars and will have to hustle forward to avoid using provisional starting spots for the first A-Main of 2013.

9:15 p.m. – Clint Smith finished second in the first heat to earn a redraw spot after getting a scare during time trials. He rolled to a stop on his first lap when his car’s carburetor flared up momentarily, but after it cooled down he fired the machine back up and he contined on… Darrell Lanigan experienced some rare struggles in the second heat, slipping from his pole starting spot to a fourth-place finish. He got out of shape in turn four running second early in the race, causing Ron Davies to get on the brakes hard and Jordy Nipper and Pat Doar to stack up trying to avoid the chain-reaction jam-up… Kent Robinson spun early in the first heat and failed to transfer… Scott James and Eric Wells tangled between turns one and two on a lap-four restart in heat one, sending Wells around. Wells was clipped by Tim McCreadie, who joined Wells in retiring from the race due to damage sustained… Chub Frank was running fourth in the third heat when he rolled to a stop on the homestretch with a broken rearend… After Ray Cook and Brian Reese came together between turns one and two during the fourth heat, Austin Hubbard was swept up in the incident and limped to the pit area with heavy right-side damage to his Baltimore Ravens-themed car…

Rocket Man is back

8 p.m. – Josh Richards quickly reestablished himself in the WoO LMS hierarchy, setting fast time with a lap of 14.352 seconds. The driver he nipped for qualifying honors? Defending champion Darrell Lanigan, who was second-fastest at 14.368 seconds.

It appeared that Lanigan’s season might be getting off to an inauspicious start when he spun in turn four before completing his first time-trial lap, but after a caution flag was thrown he gathered himself and blasted to the provisional fast-time on his only remaining circuit. Richards bested him shortly thereafter, however.

Complete time-trial results can be seen be clicking here.

The last driver to arrive was Ray Cook, the runner-up in last year’s Winter Freeze headliner. He drove into the pit area with his race car on an open trailer pulled by a box truck, which he scrambled to obtain after his regular hauler was stricken by mechanical trouble.

5:50 p.m. – Some familiar WoO LMS crewmember faces have been spotted in new places this weekend. Jason Quirin, who spent last season traveling the WoO LMS as a mechanic for Kent Robinson, is now working for 2013 Rookie of the Year candidate Eric Wells, joining Wells’s other crewman, Trey (‘Booger’) Wollum, on the road. Texas racer Morgan Bagley, another WoO LMS Rookie of the Year contender, has former WoO LMS Crew Chief of the Year Randall Edwards as his head mechanic and also has hired Nick Hoover, a 26-year-old who has worked for Jordan Bland, Russell King, car owner Dale Beitler, Brady Smith and Austin Hubbard over the past four years. And Barry Knapp, who served as a crewman for Tim Fuller during the 2009-10 seasons, is helping Fuller’s Kennedy Motorsports teammate, Shane Clanton — at least for the next two weeks.

5:45 p.m. – Delaware‘s Austin Hubbard is a big fan of the Baltimore Ravens and he’s showing it this weekend. The 2010 WoO LMS Rookie of the Year has unloaded a new MasterSbilt car sporting a graphics scheme honoring the Super Bowl champion team, including the No. 52 worn by Ravens linebacker Ray Lewis.

Hubbard’s father, Mike, and Hoosier Tire rep Bob Wirts attended last week’s Super Bowl in New Orleans with their wives. Mike Hubbard has a graphics business, so he decided to do a special car to celebrate the Ravens’ victory.

Hubbard, who will celebrate his 21st birthday on Feb. 17, has good memories of Screven. He won his first special dirt Late Model event here in January 2010, and two months later he captured his first-ever WoO LMS A-Main here as well. After both triumphs, of course, Hubbard played to the crowd with his famed ‘Ricky Bobby’ celebration, stripping out of his racing uniform and running down the homestretch wearing only his fireproof long underwear and helmet.

5:25 p.m. – Bub McCool is starting his sophomore season on the WoO LMS at less than 100 percent — physically, that is.

After slicing his right hand while opening a can of tomatoes earlier this week, McCool is sporting a line of 12 stitches across his palm. In addition, he recently injured his left leg below the knee while “messing around” with a deer that was in a ditch after he had hit it with his truck; he said he thinks he might have broken a bone in his leg, but it’s not hurting him too much so he’s refrained from visiting a doctor for x-rays at the moment.

3:55 p.m. – What a difference a year makes. Last year’s ‘Winter Freeze’ was true to its title — with temperatures dipping to the freezing point and steady 25-35-mph winds blowing all day and night, everyone in attendance labeled the event as one of the coldest, if not the coldest, they had ever experienced. Wind chills were in the teens when last year’s A-Main began.

But this year the weather is much more comfortable. After heavy rain washed out last night’s practice session (and UNOH All-Star Circuit of Champions Sprint Car show), the skies have turned sunny and temperatures are in the 60s. There’s a cool breeze and temperatures will be seasonably chilly tonight, but there’s thankfully no artic conditions to contend with.