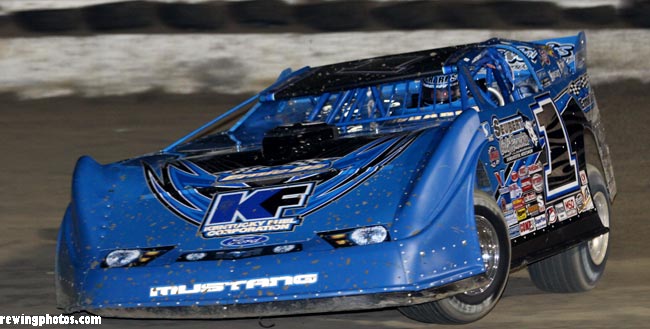 Josh Richards of Shinnston, W.Va., and Darrell Lanigan of Union, Ky., unofficially turned the fastest laps of the test-and-tune session, which gave drivers an opportunity to familiarize themselves with the three-eighths-mile oval’s increased banking and wider surface in advance of three consecutive nights of World of Outlaws Late Model Series competition.

A total of 39 drivers took practice laps around the venerable track, which was reworked significantly since its spring 2011 purchase by nationally-known radio show host Bubba ‘The Love Sponge’ Clem.

Richards, 23, was clocked clicking off circuits as low as 13.9 seconds – roughly a full second faster than the dirt Late Model track record of 14.873 seconds set by Austin Hubbard of Seaford, Del., on March 25, 2011. The 40-year-old Lanigan was just slightly off Richards’s top pace, registering lap times as fast as 14.1 seconds on multiple stopwatches.

“Bubba did a great job with the track,” said Richards, who has never won at BRP but owns a top-five finish in each of his three previous starts. “(Turns) three and four used to be so tight and flat, it kind of made it hard to get through them. Now those corners are banked and rounded more and you can carry speed and race more through there without getting all jammed up.

“With (turns) one and two banked more too, the track is definitely faster. Right now the top is so much faster, but I feel like once the cushion gets way up the track you’ll be able to move down and race all over it.”

Lanigan, who is undefeated in WoO LMS action at BRP with victories in both 2010 and 2011, seemed to have little trouble adjusting to BRP’s layout changes.

“I think we’re alright,” said Lanigan, who won the 2012 WoO LMS season opener on Feb. 11 at Screven Motor Speedway in Sylvania, Ga. “The track’s completely different – it’s fast all the way around the top, and down in three and four there’s more speed than there was last year – but I feel like we got a good handle on it tonight.”

Forty-one cars were actually in the pit area, but Bub McCool of Vicksburg, Miss., opted not to practice and Billy Decker of Unadilla, N.Y., did not arrive at the track in time to put his Gypsum Express No. 91 through its paces.

Other drivers who are expected to join the field on Thursday night include WoO LMS Rookie of the Year contenders Brandon Sheppard of New Berlin, Ill., and Dan Stone of Thompson, Pa.; Steve Shaver of Vienna, W.Va., who was a spectator on Wednesday; and Shannon Babb of Moweaqua, Ill.

Pit gates are scheduled to open at 3 p.m. and grandstand gates at 4 p.m. on each day of the Bubba Army Late Model Winternationals. Practice is set to get the green flag at 6 p.m. with time trials to follow, and heat racing is slated for a 7 p.m. green flag.

The Florida Mini-Sprint Association will race on the undercard each evening.